First Look: The ONE Smart Piano

AppleInsider
Posted: July 25, 2015 6:44PM
in iPad edited August 2015
Aspiring musicians looking to learn to play piano should check out The ONE, a unique digital piano that uses iPad to offset the learning curve associated with mastering the instrument.

Traditionally, learning to play the piano requires paid lessons from a professional teacher. This is still a solid means of learning, but digital music lessons have increasingly become the norm.

Over the years, we have tried innovative teaching tools like Ion's Piano Apprentice, a system using LEDs on a 25-key keyboard to indicate where a student should place their fingers. The system was unrefined, however, and the apps it worked with weren't amazing at instruction.

The ONE lights up LEDs behind the keys, not in the keys themselves.

The ONE Smart Piano's latest keyboard and accompanying lessons go further than its predecessors, both in hardware and software. The ONE ships in two versions, a full-size 88-key version with weighted keys that are velocity sensitive, and The ONE Light, a 61-key keyboard with non-weighted keys.

Unlike the old Piano Apprentice product that sold for $69, The ONE Smart Piano models are serious instruments, and well-made.

We set my 10-year-old daughter loose with the iPad and The ONE. The iPad connects via a lightning cable, although MicroUSB cables were included for Android use. Within a few minutes, the girl who had never played piano beyond banging 12 keys at the same time in cacophony was playing "Hot Cross Buns." While not impressive to many people, the important thing here was, she learned from the lessons in the iPad, and was encouraged by her success to play the next six lessons without waiting.

"I love the ginormous ONE. It's easier to practice on the big one. The small one is more portable, but the weighted keys feel more like a piano," she said. "The Light keys make a plastic sound when you're playing."

The USB cable is an unusual choice: It's a USB 3.0 connector we haven't seen before at the host end and lightning at the other. For The ONE Light, the cable is a desktop USB 3.0-B connector and lighting at the other end. We're not sure why they chose to use the OTG (on-the-go) cable arrangement rather than using the USB A connector, which would enable cables from all manufacturers.

Both pianos are essentially MIDI controllers, but they don't have MIDI connectors. The user manual mentions that they both have the 128 General MIDI patches internally. The ONE has no means of accessing these sounds from the keyboard. When attempting to use them with Garageband on iOS we were able to play different sounds (strings, for example) but the notes were accompanied by the internal Grand Piano sound which we could not turn off. This is a software choice, and the software is under development. The ONE Light does make some of these patches available through the Tone button.

The ONE Light has a Tone button, Sustain button, and lights up the keys themselves.

The apps provided by The ONE are The ONE Smart Piano. The ONE application allows you to choose between Video Tutorials, LED-guided practice, and KARA Game.

Video Tutorials in our early experience take the form of lessons described above: A teacher plays, breaks down what he played, with LEDs on the keyboard showing the student where to place fingers, and then giving the student a chance to get it right.

The KARA Game is sort of similar to Guitar Hero or Rockband, for keyboard. The game appears to handle single-player or two-players sitting on the bench playing. At time of this writing, duet gameplay was not enabled in the beta version of the app we used. Single player was actually quite fun. 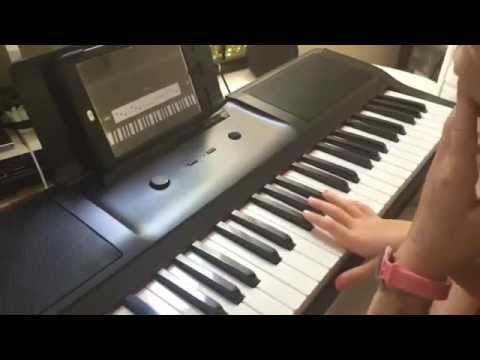 What are the downsides to The ONE? It's not clear that it can be used as a MIDI controller separately from the piano sounds. We experimented with Garageband and it was able to play other sound patches - while simultaneously playing the piano patch.

It seems like it's clear that it uses MIDI so we're not sure why that isn't a present option, perhaps with AudioBus support in iOS, which would make it a performance tool as well. It seems like performance is part of the intention, given that The ONE Light has Aux In, Aux Out, and Microphone In connectors.

It also wasn't possible to change the sound patch (Tone) of the full size The ONE - that tone feature is only available on the 61-key model.

Despite these very minor shortcomings, The ONE is a very good learning tool, and we regret that we have to return it at the end of this review.

During The ONE Smart Piano's Indiegogo campaign, which has four days left as of this writing, The ONE is priced at $849 with a retail price of $1500, while The ONE Light is available for $229.
«123»