AppleInsider
Posted: April 25, 2019 5:13PM
in iPad edited January 2020
With the introduction of the Logitech Slim Folio Pro, iPad Pro owners now have a second option to Apple's Smart Keyboard. For the $50 savings Logitech provides, many will consider it -- but which one should you go with? 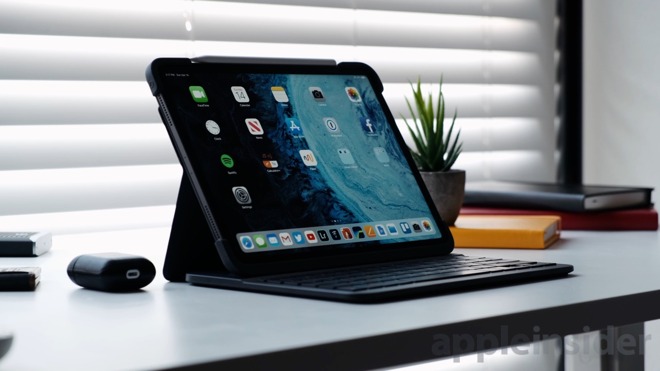 As soon as we reviewed the Logitech Slim Folio Pro, we received a giant number of queries on how it compares to Apple's first-party keyboard. So, let's look at the pair together.

The Logitech Slim Folio Pro is a protective Bluetooth folio-style keyboard that covers the front and back of the iPad. Apple's Smart Keyboard, on the other hand, is slim, minimal looking, and pairs via the iPad Pro's Smart Connector on the back. 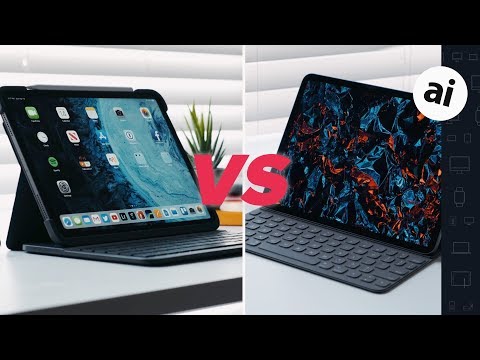 The Smart Keyboard doesn't require an external battery whatsoever, it uses the Smart Connector and feeds power from the iPad Pro. Its overall profile is very slim, with decent keys that offer a good amount of space between each, but the throw and key travel is almost non-existent.

Apple's Smart Keyboard also doesn't sound that great when you're typing quickly. It has a soft, muffled sound rather than a substantial click from a membrane or mechanical keyboard. It is still a good keyboard nonetheless, thanks to the ease of use and slim profile. 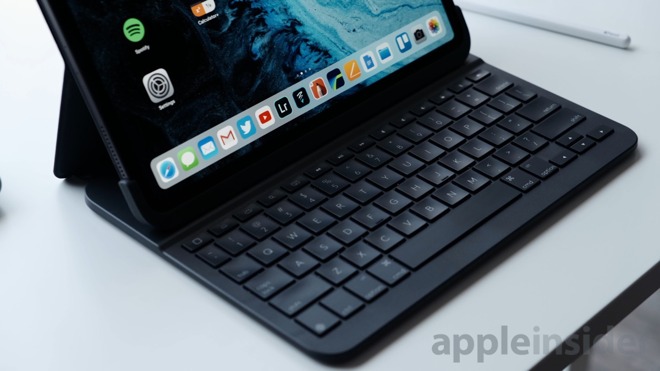 The Logitech Slim Folio Pro, on the other hand, is a rugged keyboard case solution for the iPad Pro. It protects all four corners of the iPad and enough clearance for the second-generation Apple Pencil to sit and charge easily along the top edge. Unlike Apple's Smart Keyboard, you'll have actual drop protection for your iPad Pro given the pliable silicone material. Apple's folio will likely just fall off in the event of a tumble.

In terms of the overall design, we like Apple's Smart Keyboard in terms of looks. It's a lot sleeker and feels far better to carry the iPad when it's closed. It is exceptionally lightweight and any pounds we can shed from our gear bag the better. 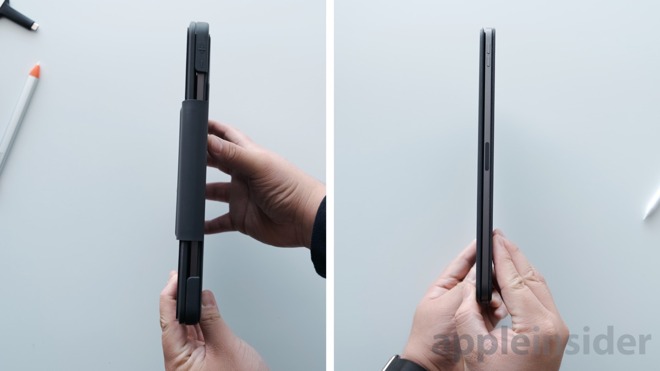 On the contrary, the Logitech Slim Folio Pro is not a "slim" device at all -- despite the word "Slim" in its name. It's a lot thicker than the Smart Keyboard, and a lot heavier too. The reason for this is that it houses a larger keyboard, a rechargeable battery, offers protection, and it uses different materials than Apple's Smart Keyboard.

When it comes to functionality, and how the keyboards perform, the Slim Folio Pro is the clear winner here. Like we mentioned in our review, the keyboard feels great, and has plenty of travel, very reminiscent of Apple's MacBook keyboard before they switched over to their new butterfly switches. The Keyboard is also backlit with two brightness options which is great for night time typing. It features iOS shortcuts along the top -- like a home button, spotlight and a lock/unlock button -- which makes the device feel more "pro".

Typing on the Smart Keyboard was great, but once we switched over to Logitech's Slim Folio Pro, it was a night and day difference. The tactile buttons, the throw, and backlit keys won us over.

Both keyboards allow for two different typing angles. The Smart Keyboard has two different slots where it magnetically snaps the iPad into place. The Logitech Slim Folio on the other hand only has one, but you can set it to a different angle by adjusting the back which gives you a more vertical view of the display.

We really had a problem with Apple's new design of the Smart Keyboard Folio. You can dig deeper in our full review, but the short version is that when you want to use the folio in the vertical position for watching content, the keyboard still extends out the front a ways and takes up a large footprint compared to the previous generation. When you also fold the Smart Keyboard Folio behind the iPad, your hands come into contact with the keys which feels uncomfortable. 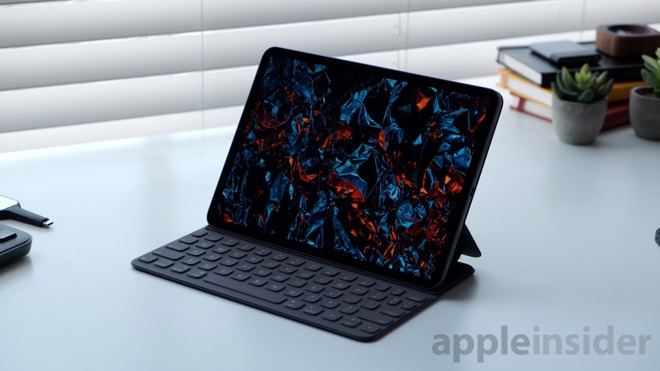 You can also set both keyboards in "drawing" mode where the keyboard goes behind the iPad, but given the bigger footprint, and key travel on the Smart Folio Pro, pushing down on the iPad on either side of the device will make the iPad uneven at times and can be a bit frustrating when using the Apple Pencil. That's not the case with Apple's Smart Keyboard due to its slimmer profile. So just be aware of that if you're also considering using the Apple Pencil.

The Apple Smart Keyboard runs off the iPad's battery using the smart connector, so battery life doesn't exist, technically. The Slim Folio Pro can last up to three months on a single charge and it charges via USB-C. You can either use the iPad Pro's bundled USB-C charger or you can connect a USB-C cable to the output of the iPad Pro and charge directly from there -- helpful for when away from an outlet.

If you're the type of person who lugs around their iPad Pro everywhere and you want the most minimal looking keyboard case the Apple Smart Keyboard Folio is what we recommend you pick up. 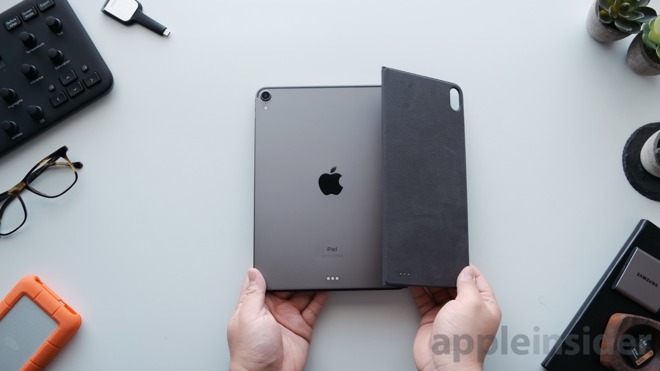 However, if you're willing to give up that ease of use, lightweight and slim form factor and you care more about how the keyboard feels, want some added protection, and you want to maximize how you work then you should pick up the Logitech Slim Folio Pro.

It's only $120 versus Apple's $179 Smart Keyboard. With the money you're saving, you can use that to pay towards the Apple Pencil if you haven't picked one up yet.