Apple releases updated $199 iPod touch with A10 Fusion, up to 256GB of storage

AppleInsider
Posted: May 28, 2019 12:36PM
in General Discussion edited May 2019
About four years after its last update, the iPod touch gets a refresh with Apple adding an A10 Fusion processor. 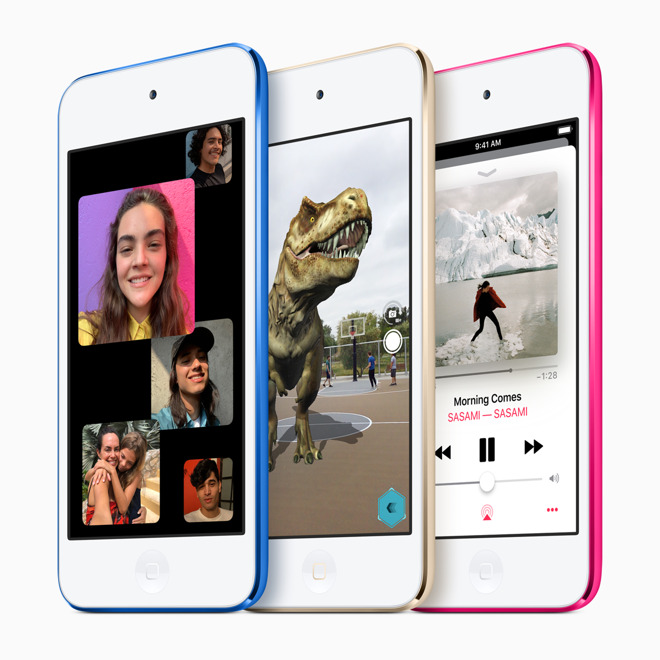 Apple has released the first new iPod touch since July 2015 with this new model improving on its predecessors' specifications. Sporting the A10 Fusion processor, the new iPod touch costs $199 for 32 GB of storage, $299 for 128GB, and $399 for 256GB, the latter being a new larger capacity option for the product line.

"We're making the most affordable iOS device even better with performance that is twice as fast as before, Group FaceTime and augmented reality starting at just $199," said Greg Joswiak, Apple's vice president of Product Marketing. "The ultra-thin and lightweight design of iPod touch has always made it ideal for enjoying games, music and so much more wherever you go."

The four-inch Retina multitouch IPS display has a resolution of 1136 by 640 pixels, giving it a pixel density of 326ppi, with the screen also offering a contrast ratio of 800:1, and 500cd/m squared maximum brightness.

On the back is an 8-megapixel autofocus camera with an f/2.4 aperture and a five-element lens, auto image stabilization, a hybrid IR filter, and HDR support, which is capable of 1080p video at 30fps and slo-mo at 120fps. On the front is a 1.2-megapixel FaceTime HD camera with auto HDR for photos and 720p HD video capture.

Connectivity is provided via Bluetooth 4.1 and 802.11ac Wi-Fi, as well as a 3.5mm headphone jack, and Lightning for data transfers and charging. Battery life is said to last for up to 40 hours for music playback, and up to 8 hours for video.

This is the seventh generation of the once beloved iPod touch and marks the cheapest entry point for new iOS users.