Apple previews Marunouchi store in Tokyo ahead of Saturday opening

AppleInsider
Posted: September 5, 2019 2:44AM
in General Discussion edited September 2019
Apple on Wednesday offered an early look at its soon-to-open retail outlet in the Marunouchi district of Tokyo, showing off next-generation styling and the use of natural materials at what will be the company's largest brick-and-mortar store in Japan. 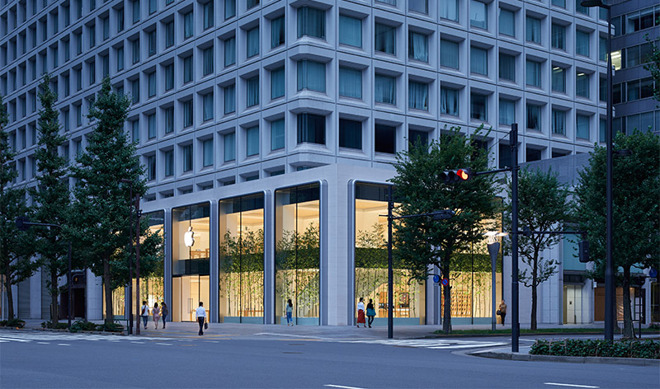 Located across from the bustling Tokyo Station, Apple Marunouchi opens on Saturday, Sept. 7, as the tech giant's fifth store in Tokyo, and the third location to open in the country since April.

"The opening of Apple Marunouchi marks a significant moment in Apple's long relationship with Japan," said Apple retail chief Deirdre O'Brien. "Marunouchi has amazing energy and our teams can't wait to welcome customers to our largest store in Japan for the first time on Saturday."

Apple points out first-of-their-kind vitrine windows that span the store's two floors. Cast from aluminum, the installations boast three-dimensional round corners that jut out beyond the store's stone facade. The design allows outside street life to "connect with the store," Apple says. Adding to the effect are rows of bamboo planted inside at the base of each window.

A large double-height atrium acts as the heart of the store by connecting both floors in a single vertical space. The outlet's massive screen sits in the middle of the atrium, where customers will gather and sit on Apple's trademark wooden stools and leather balls while attending Today at Apple sessions.

Apple has invited The Tokyo Creative Guild to present a special 12-part Today at Apple series to mark the store's opening.

Apple Marunouchi is staffed by the usual assortment of sales professionals, Genius employees, and Creative Pros ready to assist in product sales and aftermarket services. According to Apple, more than half of the store's 130 workers come from Apple stores in Japan, and staff members collectively speak 15 languages.

Elsewhere in Tokyo, Apple is finishing up a remodel of its Omotesando store, which is scheduled to open later this month. Apple in September will also relocate its store in Fukuoka to a larger location.