Powerbeats 4 spotted at retail ahead of official announcement

AppleInsider
Posted: March 15, 2020 11:45AM
in General Discussion edited March 2020
An eagle-eyed shopper has spotted Apple's new Powerbeats 4 on WalMart shelves despite not being officially announced yet. 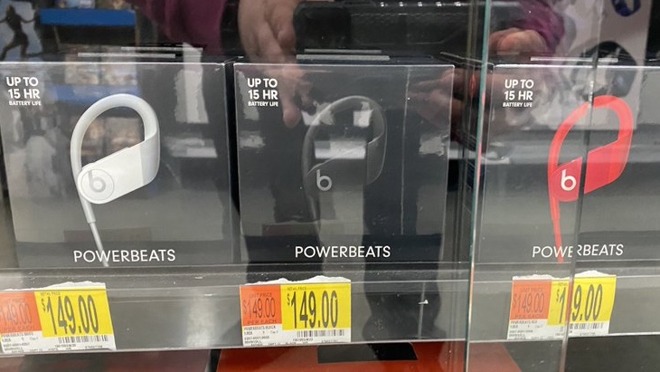 Powerbeats 4 on display ahead of official announcement

Apple is expected to release some products sometime in the month of March, as they did last year, and this public sighting of a new product confirms that at least some new products are headed our way. The Powerbeats 4 on display are retailing for $150, despite the previous generation being $200 normally.

@9to5mac @MacRumors did the new Beats Powerbeats drop without announcement? these were found in my local Walmart in Rochester NY. pic.twitter.com/oiqDD20dcB

The packaging shows that the unreleased earphones have a new design, are still wired ear-to-ear, but feature up to 15 hours of listening time. This is likely due to the inclusion of Apple's latest H1 chipset, which may also allow for "Hey Siri" voice commands.

AppleInsider has independently confirmed the Powerbeats 4 are available to purchase. In purchasing the earphones at a Walmart, AppleInsider was informed a special label had to be applied to the packaging as it wasn't in the system for sale. They were also not available on the shelves, but store staff advised they didn't know about specific launch plans, and stock was received last night.

Unlike the Powerbeats Pro and AirPods ranges that rely on a charging case to regain power, the Powerbeats 4 are recharged using a Lightning connection.

AppleInsider update this post as soon as an official announcement is made.