AppleInsider
Posted: June 30, 2020 2:32PM
in iPod + iTunes + AppleTV
Vizio is bringing the Apple TV app to its lineup of smart televisions, with an update to its SmartCast feature arriving later this summer that also brings other improvements to the software. 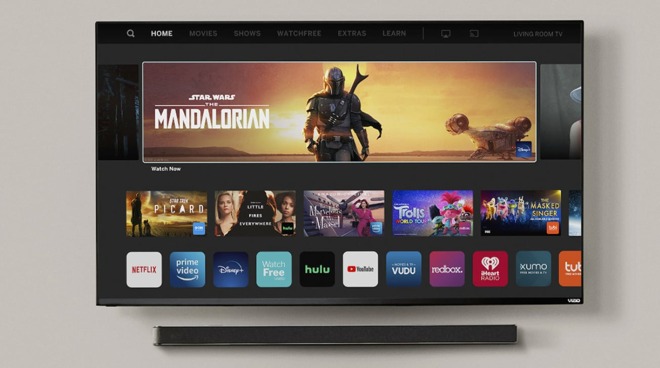 The update to the SmartCast software being used in Vizio's smart TVs will reportedly make the experience "even snappier than before," with the company claiming it will allow users to quickly jump in and out of apps and scroll through content at a faster rate.

As part of the update announcement, Vizio advised it was adding to its existing roster of streaming apps, which includes Disney+, Hulu, YouTube TV, CBS All Access, and Amazon Prime Video. Arriving "later this summer" will be two more apps, with the Apple TV app joined by Peacock.

The apps will provide access to 4K HDR content on supported televisions, as well as audio via Dolby Atmos.

Vizio already offers a considerable amount of Apple-related funcionality, with SmartCast already supporting Apple's AirPlay 2 for streaming from iPhones and iPads to the television. It is even possible to use Siri to control the television, and to use it as part of a smart home system like HomeKit.

The update will be available on its speed-boosted 4K 2021 models, as well as all SmartCast-enabled televisions going released since 2016.