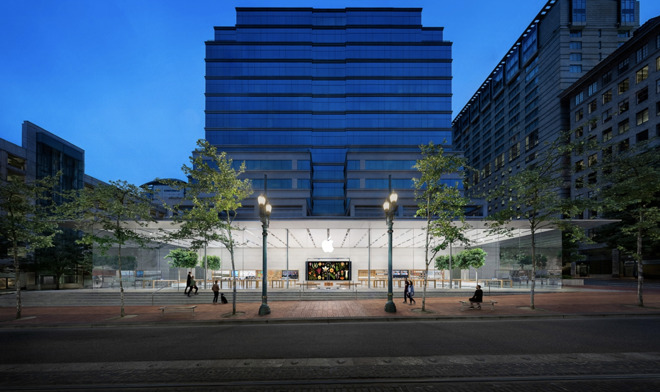 When the New Hampshire home of Ghislaine Maxwell, the ex-girlfriend and accused co-conspirator of the late mogul and convicted sex offender Jeffrey Epstein, was raided last month, FBI agents found a cell phone wrapped in tin foil among her possessions.

According to federal prosecutors, as cited by CNN, the phone was "a seemingly misguided effort to evade detection, not by the press or public, which of course would have no ability to trace her phone or intercept her communications, but by law enforcement." It's not clear if the phone was an iPhone, but Vanity Fair reported that Maxwell had an iPhone, iPad, and laptop with her during her time living incognito.

Maxwell, who has been charged with federal crimes including enticing a minor to travel to engage in criminal sexual activity, has pled not guilty.

Meanwhile, an iPhone case, featuring a pair of reindeer looking down a chimney with the text bubble "Where is Ghislaine Maxwell?" is available for purchase on RedBubble.com for $21.

Soldier jailed, discharged for selling bullets in an iPhone box

A 31-year-old British soldier has been found guilty of possessing prohibited ammunition after police, in 2017, stopped a car containing both a loaded handgun and 97 rounds of 9mm Parabellum ammunition, which was packed into an iPhone box. According to EDP 24, police traced the International Mobile Equipment Identity (IMEI) number on the box and connected it to the soldier, who was both sentenced and discharged from the British Army.

A California man has been sentenced to 14 months in a halfway house for his part in a conspiracy to steal actress Demi Moore's no-limit American Express card and use it for $170,000 in fraudulent purchases. According to Patch, the man pled guilty two years ago to charges that included conspiracy to commit credit card fraud, use of unauthorized credit cards and aggravated identity theft.

One of the other conspirators impersonated Moore's personal assistant at a FedEx facility and took delivery of the card, which was then used for purchases at the Apple Store, Fifth Avenue, and other Los Angeles stores.

It was widely reported, following looting in early June, that Apple had placed messages on stolen iPhones that Apple was tracking the items.

However, since then there have been no news reports anywhere about Apple providing data for arrests of those who looted iPhones, and with more Apple Stores closed due to coronavirus, there have been no other reports of break-ins at Apple Stores following the spate of looting in June. One reporter did post a photo of someone being arrested near an Apple Store in Portland, although the circumstances are not clear:

Random arrest in front of Apple store. No one knows why. Ppb arrest. Not feds pic.twitter.com/yo0vjeTwBl

An Instagram influencer who went by the name Ray Hushpuppi was arrested in early July on charges that he used hacking schemes to steal millions of dollars, and that his Instagram posts were used to flaunt stolen merchandise that link him to the crimes.

According to CNN, Hushpuppi was arrested in Dubai and later extradited to the U.S. The FBI affidavit states that iPhone and iCloud data from the accused's co-conspirator was used against "Hushpuppi," whose real name is Ramon Abbas.

Abbas has yet to be formally indicted.

Started out my day having sushi down at Nobu in Monte Carlo, Monaco then decided to book a helicopter to have a pedi-medi and facials at the Christian Dior spa in Paris then ended my day having champagne in Gucci #LifeGoals #BeInspired

An alleged coconspirator, known as "Woodberry," was also nabbed thanks to his iPhone and WhatsApp data, Premium Times reported.

iPhone stolen from teenager who was selling water

The community in Camden, N.J., has rallied around a 16-year-old who was robbed of an iPhone and $1,000, following a long day of selling water on the side of the street. According to 6ABC, the 16-year-old was robbed at gunpoint, but community members have pitched in to support him afterward, including through his Cash App account.

A former chief deputy in the office of the Des Moines County Sheriff's office in Iowa is facing felony theft charges, after he was accused of improperly using office funds to purchase items for himself, including a drone, a MacBook Pro, a Dell computer, a copy of Microsoft Office Home and Business, an iPhone and a membership to a website for retirement advice.

According to KWQC, the man was caught after he retired in 2018 and turned in his work computers, and it was discovered he had purchased newer versions of both of them.

A group of men has been accused of engaging in a conspiracy to blow up ATMs in three U.K. cities between August 2019 and January 2020. According to Basingstoke Gazette, two of the group of five have pled guilty, and while one of the men "denied conspiracy to cause explosions likely to endanger life and conspiracy to steal, but admitted refusing to hand over the PIN to an iPhone," which is against Britain's Regulation of Investigatory Powers Act.


U.K. man caught with hundreds of stolen iPads and iPhones

Police in the U.K. arrested a man in mid-July, after they found hundreds of stolen iPhones and iPads, along with the equivalent of $60,000 in cash in the man's office. According to the Dagenham Post, the investigation was carried out by the Met's Proactive Money Laundering Team.