AppleInsider
Posted: September 8, 2020 6:23PM
in General Discussion
The Apple, Amazon, Google, and Zigbee Alliance home automation networking effort appears to be about to bear fruit, with a release of the new smart home communication standard expected in 2021. 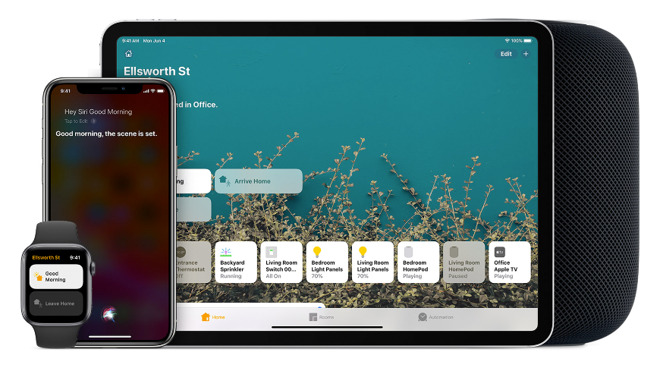 The Zigbee Alliance has announced that it will release the standard for "Project Connected Home over IP" in 2021. While the coronavirus has put them slightly behind their original release date of the end of 2020, they are on track to release a draft specification by late 2020.

Project Connected Home over IP is "built around a shared belief that smart home devices should be secure, reliable, and seamless to use." The project's stated goals are to enable communication across smart home devices, mobile apps, and cloud services and to define a specific set of IP-based networking technologies for device certification.

The protocol is not expected to replace HomeKit or other vendor's proprietary solutions but is designed to complement existing technologies with the goal of providing safer IoT integration. The group also points out that there is no specific focus intended for any company, and members may implement the technologies as they like. The standard should make it easier for manufacturers to build devices that are compatible in a smart home with services like Siri, Google Assistant, and Alexa.

The goal of the first specification release will be Wi-Fi, up to and including 802.11ax (aka Wi-Fi 6), that is 802.11a/b/g/n/ac/ax; Thread over 802.15.4-2006 at 2.4 GHz; and IP implementations for Bluetooth Low Energy, versions 4.1, 4.2, and 5.0 for the network and physical wireless protocols. Future development is expected in regard to Ethernet and cellular technologies.

The devices targeted at first will include lighting and electrical products, HVAC controls, and security and access -- including doors, locks, security systems, and more. Also included will be TVs, automated window coverings, access points, bridges, and hubs.

The industry working group has been taking an open-source approach to develop and implement a new, unified connectivity protocol. The member companies expect that the joint approach to developing the technology will accelerate the protocol's development and deliver benefits to manufacturers and consumers faster.