AppleInsider
Posted: September 14, 2020 4:37PM
in Apple Watch
The Apple Watch has been credited with helping the life of a police officer stabbed in Arizona, by allowing him to speak to his dispatcher when his radio failed to function properly. 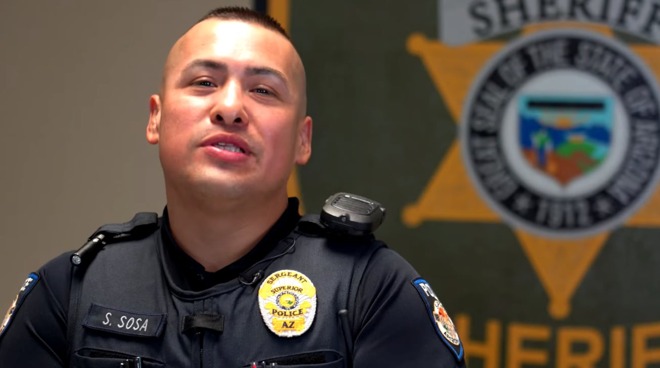 In a Facebook video published on Friday, the Pinal County Sherriff's Office shares radio recordings and an interview with Sgt. Sosa of the Superior Police Department, about an incident that occurred in February. The video explains that Sosa was attempting to arrest a wanted felon, one that turned out badly for the sergeant.

After catching up with the suspect, Sosa was then confronted, and then struggled to bring the man to the ground. However, during the pursuit, Sosa's microphone unplugged from the radio, which combined with holding the suspect on the ground, made it impossible to get back in contact with dispatcher Gloria Wheeler.

Repeated attempts by Wheeler to contact over the radio eventually led to a phone call, which Sosa was able to answer from his Apple Watch. Sosa was then able to request assistance from other officers to complete the arrest.

At this time, the suspect had managed to reach into their pocket to pull out a knife, which he used to stab Sosa in the leg. Using the open call, Sosa updated dispatch on the need for an ambulance, which was summoned to his location.

Wheeler received an award for her actions which helped save the life of Sosa that day. "The dispatcher saved my life because I was able to continue fighting, and she was able to send resources I needed out there," Sosa explained.

The Apple Watch has been connected to many different incidents where a life was saved, such as the 2017 case of a woman calling 911 from her Apple Watch following a car accident, when her iPhone was out of reach. Its other functionality, including fall detection and heart-related features, have also been credited for helping save lives.