AppleInsider
Posted: December 20, 2020 1:22PM
in iOS
The Electronic Frontier Foundation has declared Facebook's attack against Apple's anti-tracking initiatives as a "laughable campaign," one that actually works against the small businesses that the social network is supposedly trying to protect. 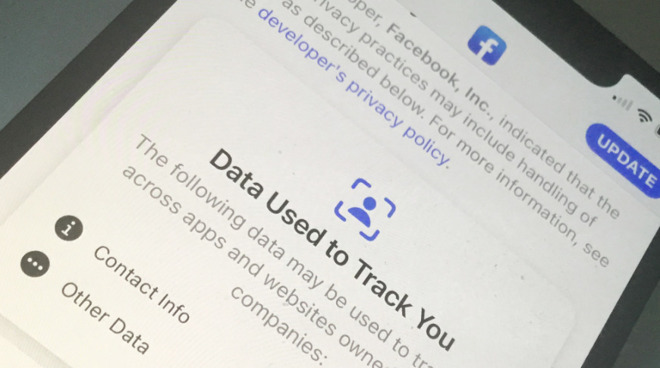 Facebook's ongoing media campaign to try and pressure Apple into halting its program of changes to limit the amount of ad tracking that takes place across Apple's ecosystem has already received criticism from Apple CEO Tim Cook and the company itself. Now, the privacy-focused non-profit EFF has waded into the argument, and has sided with Apple.

In an article published on Friday to the EFF's website, the group spells out that Facebook's campaign, which largely consists of a media blitz claiming Apple's privacy changes will be bad for small businesses, is actually the opposite. Instead of protecting privacy, the EFF says it is a "laughable attempt from Facebook" to distract users from its "poor track record of anticompetitive behavior and privacy issues," and to derail pro-privacy moves that would be bad for Facebook's business.

Apple's AppTrackingTransparency feature rolling out to iOS 14 and iPadOS 14 is applauded by the EFF, as "requiring trackers to request your consent before stalking you across the Internet should be an obvious baseline." By enabling users to choose which third-party trackers can or cannot function, the change "gives users more knowledge of what apps are doing, helps protect users from abuse, and allows them to make the best decisions for themselves."

The feature is "one more step in the right direction," the EFF reckons, "reducing developer abuse by giving users knowledge and control over their own personal data."

On the Facebook campaign against it, the EFF says it's not about small businesses, and is "really about who benefits from the normalization of surveillance-powered advertising, and what Facebook stands to lose if its users learn more about exactly what it and other data brokers are up to behind the scenes."

Targeted advertising, which relies on such trackers, are thought to earn more money than untargeted ads, but the EFF claims the extra revenue doesn't reach creators of content or app developers. "Instead, the majority of any extra money earned by targeted ads ends up in the pockets of these data brokers," writes the EFF, naming Facebook and Google as two beneficiaries.

As a "handful of companies control the online advertising market," the EFF says small businesses cannot compete effectively, in part due to the ad industry itself promoting "this fantasy that targeted advertising is superior to other methods of reaching customers," in turn making untargeted ads less valuable.

"Facebook touts itself in this case as protecting small businesses, and that couldn't be further from the truth," the EFF charges. "Facebook has locked them into a situation which they are forced to be sneaky and adverse to their own customers. The answer cannot be to defend that broken system at the cost of their own users' privacy and control."

In conclusion, the EFF reiterates how App Tracking Transparency is a "great step forward" for Apple. "When a company does the right thing for its users, EFF will stand with it, just as we will come down hard on companies that do the wrong thing. Here, Apple is right and Facebook is wrong."