The best board game conversions to play on your new iPad

AppleInsider
Posted: December 25, 2020 5:56PM
in General Discussion edited May 2022
Whether you are playing with your family in the living room or with friends across the world, these are the best digital board games to play on your iPad. 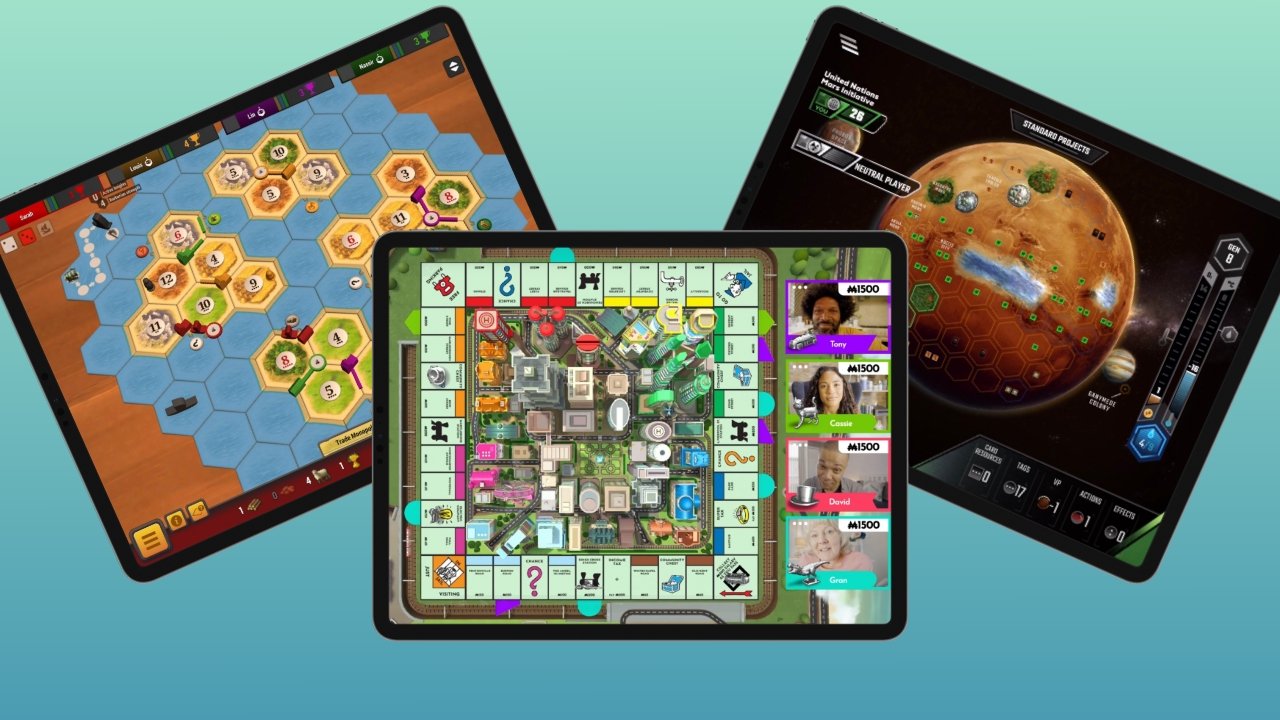 Best board games for iPad

Board games have always been a great way to pass the time, and many are made better with digital conversion. Playing on your iPad means a quick start, no setup, no cleanup, and no missing pieces.

Digital games have their upsides -- play alone against AI or multiplayer across the internet. Some games offer "play and pass" modes where you can play with multiple people on a single device.

The digital version of Ticket to Ride offers a faithful recreation of the physical board game. Be the quickest player to link up your cities and reach your destinations. 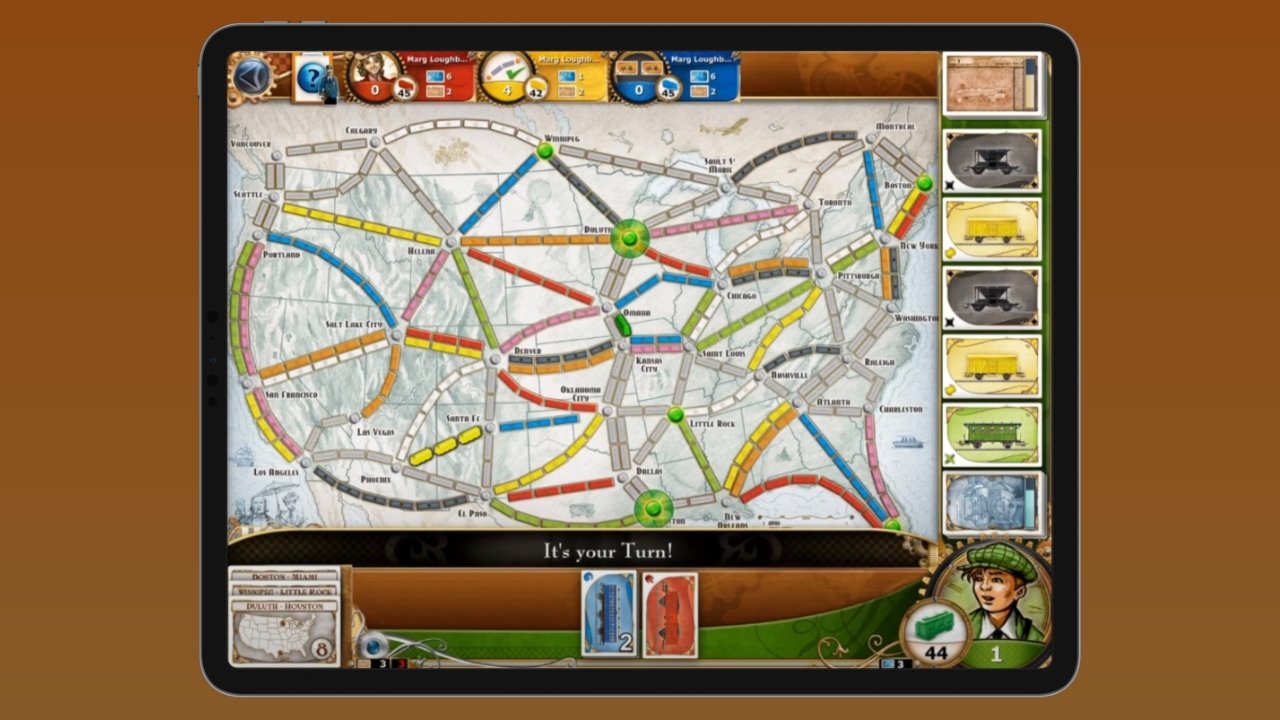 'Ticket to Ride' works great as an iPad game

Expansion packs enable further gameplay as you travel from Europe to India while passing through China.

There is a single-player mode, online multiplayer, and local multiplayer against friends and computers. A cross-platform mode enables you to challenge players on any device.

As was mentioned in a previous board game roundup "Monopoly" is a classic board game that's been around since 1935. The iPad version of the game continues to receive updates regularly. 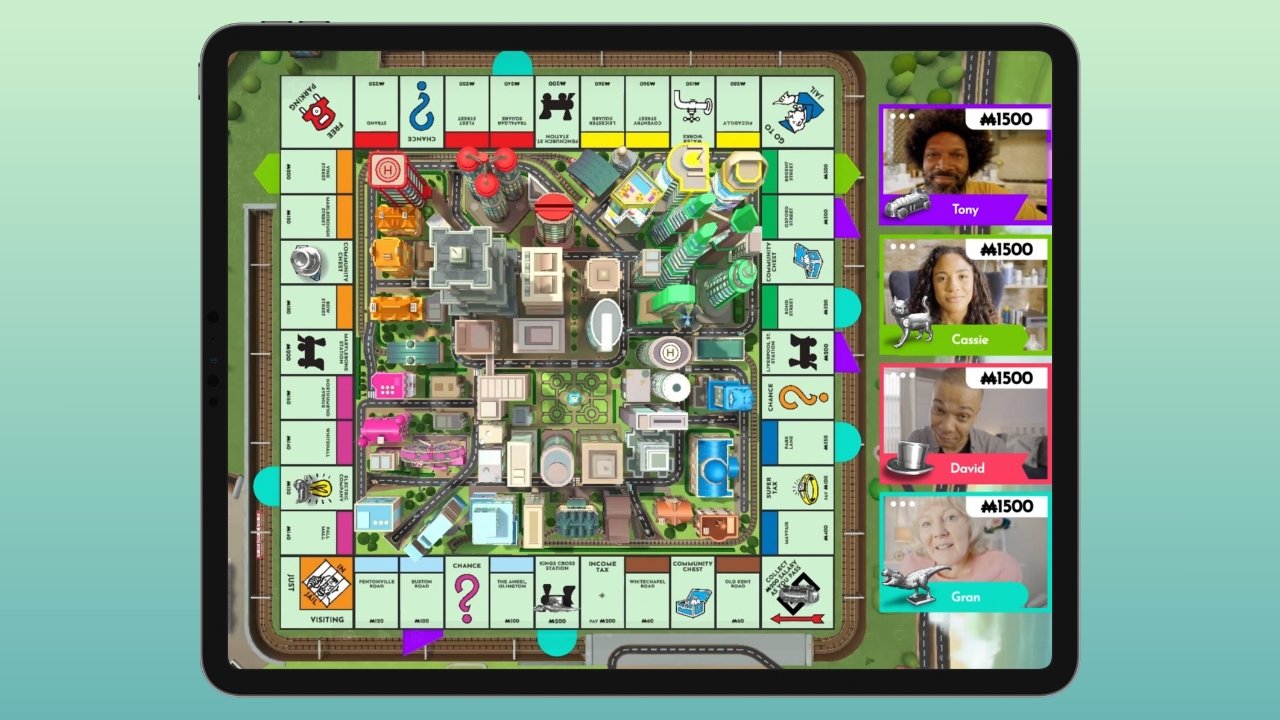 "Monopoly" is the classic property management game from Hasbro

The game has online and local multiplayer as well as pass and play. You can play on the classic Monopoly board or purchase different themes.

The game unfolds with 3D representations of classic game pieces. The properties burst with life and have animated sequences as you play.

There is a collection of games from Marmalade Game Studio for $10.99 that bundle "Monopoly" with the other classics mentioned like "Clue," "The Game of Life 2," and "Battleship."

This turn-based strategy board game has evolved into a full-fledged video game with various modes. In Battleship, you can play the classic game with friends or against AI on a virtual game board. 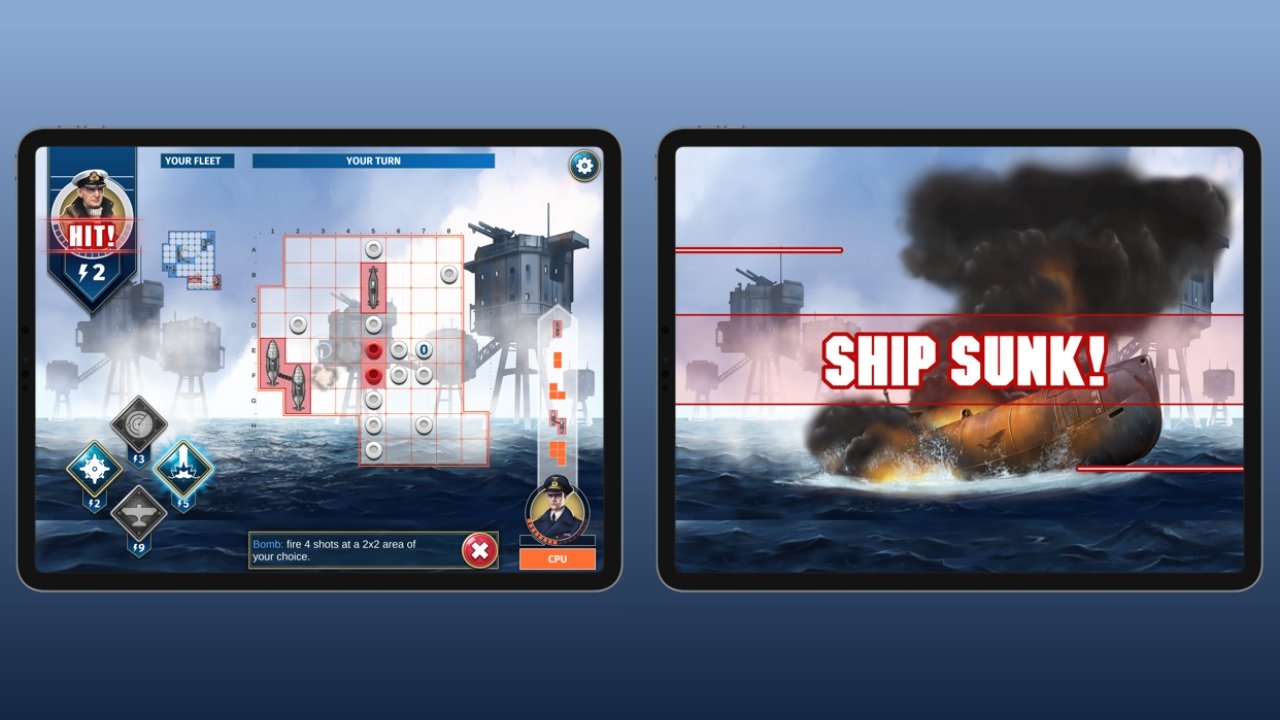 'Battleship' is reimagined for iPad with new strategic gameplay options

Choose where to place your fleet, then try to sink enemy ships by guessing where they are placed on the battlefield. The game's original version took place on a square grid, and players could either hit or miss each other's ships.

Because this is a virtual version of the game, game boards can be configured into different shapes for new kinds of tactics. A new alternate mode called "Commanders Mode" brings all-new gameplay elements and special abilities.

The iOS version of Clue lets you figure out if it was Professor Plum with a candlestick in the ballroom or Colonel Mustard with the rope in the conservatory. The mobile port of this board-game classic stays true to the original mystery game while adding 3D visuals and storyboard illustrations to add to the sense of immersion. 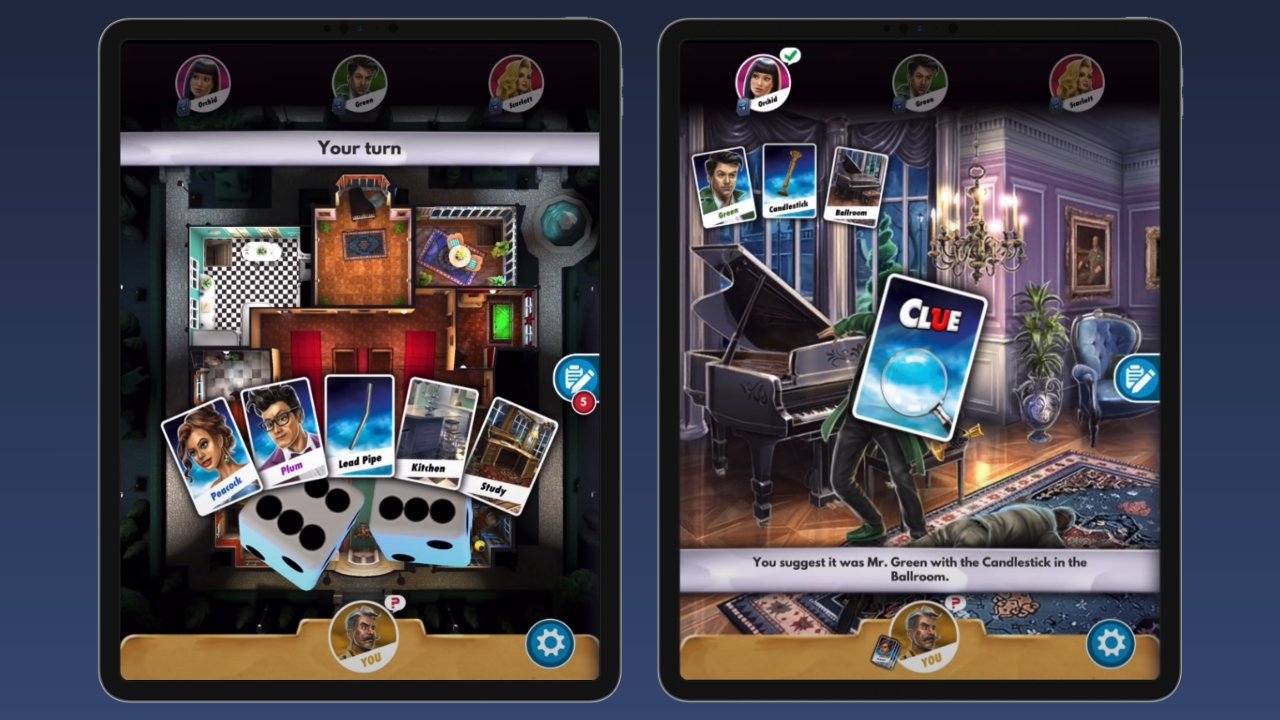 'Clue' brings the classic mystery board game to iOS

You can play Clue either in online multiplayer or solo against AI.

The game costs $3.99 in the App Store, with optional in-app purchases for different themes. The full game using the classic theme is included in the base purchase.

The physical board game is also available on Amazon for $21.99.

Hasbro's Game of Life 2 is an evolution of the original board game. This digital sequel is an enhanced take on the classic with a new animated game board and more modern content. 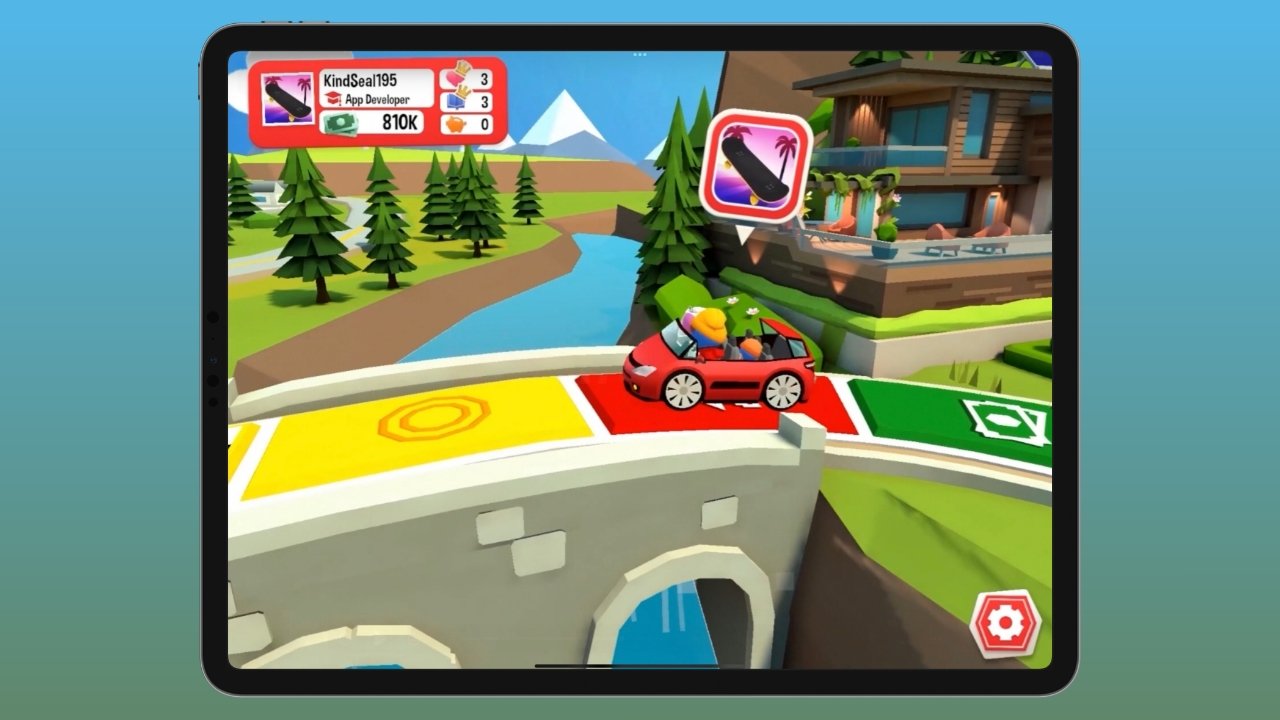 Customize your game piece and find your career among new choices like blogger or brain surgeon. Start as a teen and earn new qualifications for your chosen career. Or adopt several cats and retire early.

You can play alone against AI or online. There is also a pass and play option for local games.

There are in-app purchases for new themes, character accessories, and a season pass. The game is updated regularly with new content.

In Tokaido, you play as a traveler who journeys along the East Sea road in Japan. You and your friends compete to live the most interesting journey by the end of the game to see who wins. 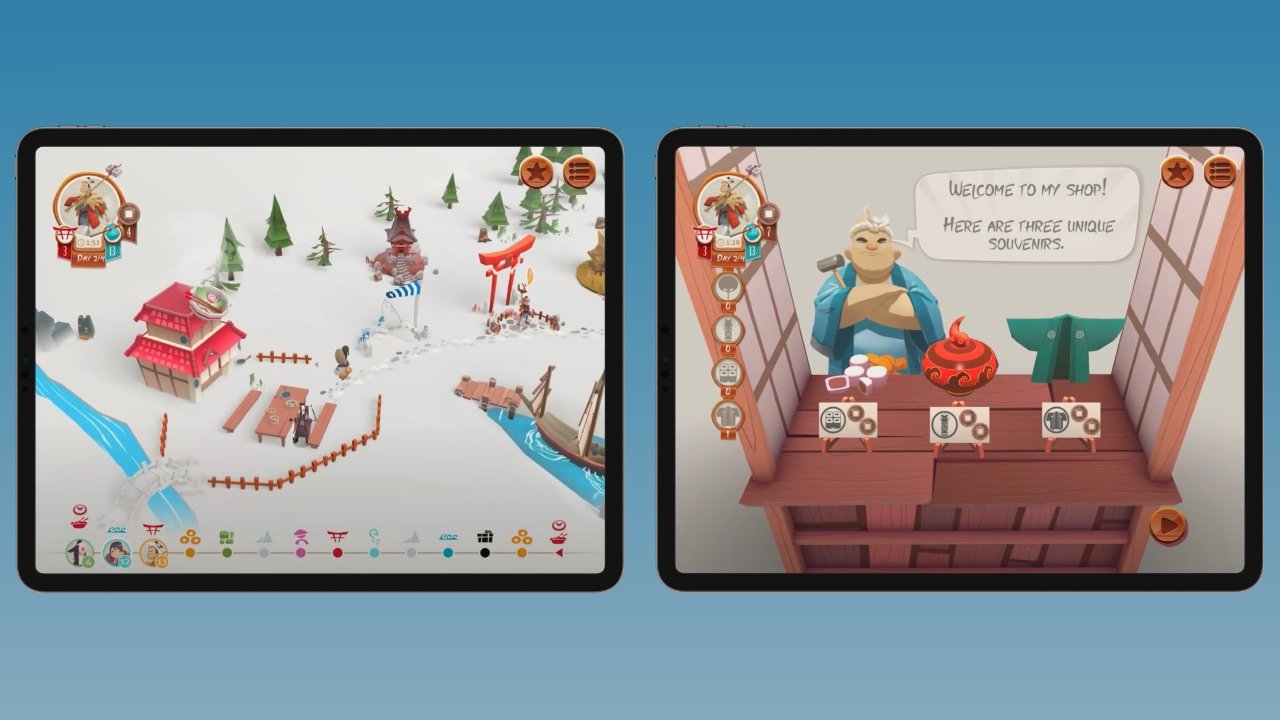 The digital version of the game has a graphical interface to bring the beautiful scenery to life. Players can lose themselves in the zen board game between a great soundtrack and good visuals.

Play solo, against friends online, or against an AI. You can also play with friends locally using pass and play.

Suburbia is like a board-game version of Sim City, making this iOS adaptation a video game based on a board game that was inspired by a video game. The 2012 tabletop version of Suburbia won numerous awards, including the Mensa Select Mind Games award. The digital port landed on iOS in 2014. 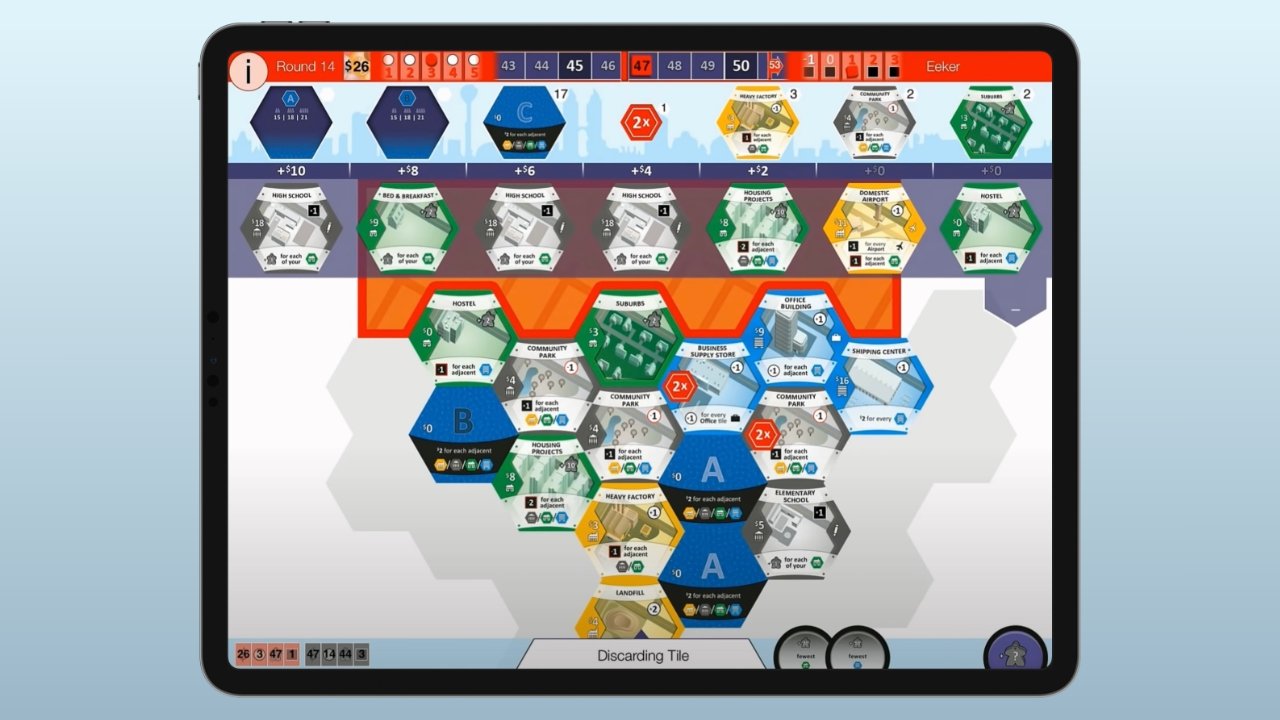 'Suburbia' is a city simulator based on a popular card game

You'll compete with friends or against AI as you each control a borough in the same city. It uses a complex market scheme, where your moves will affect the market for other players' tiles and vice versa. Choose a strategy to build sprawling residential, industrial, commercial, and government areas.

Lead a corporation and launch Mars terraforming projects in Terraforming Mars. This digital adaptation brings the game board to life with animations and stylized graphics. 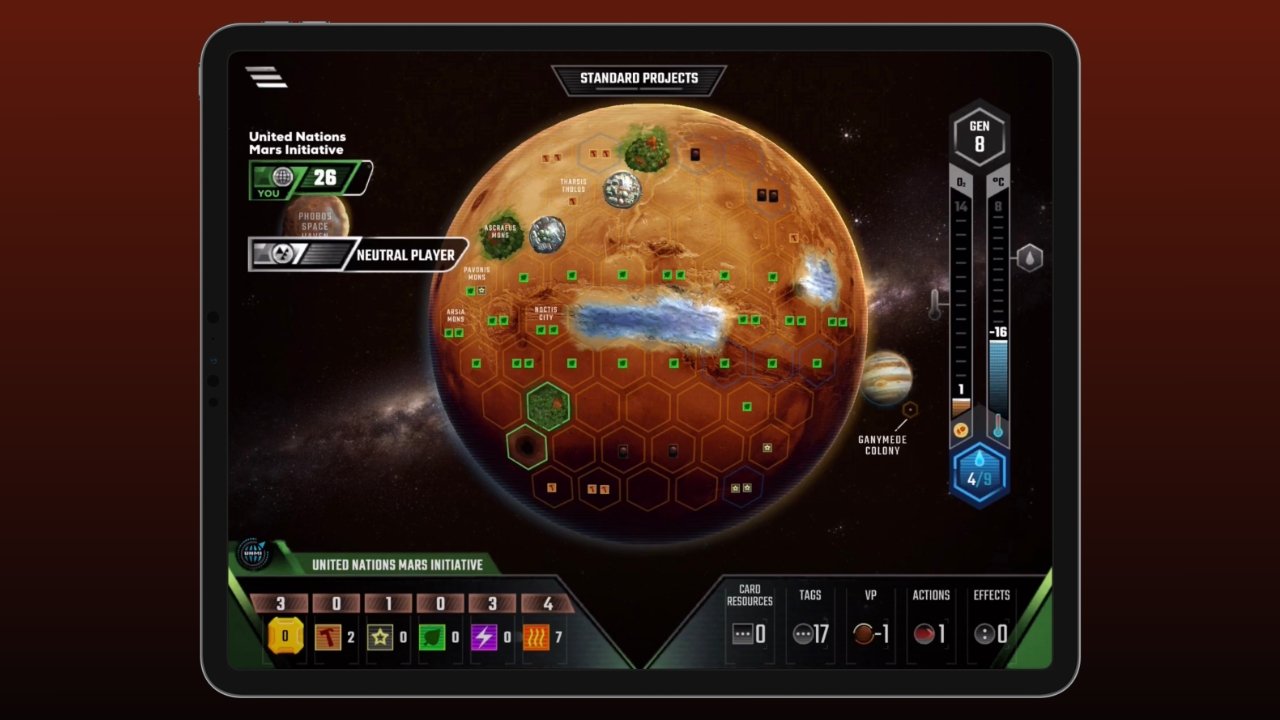 'Terraforming Mars' comes to life with animation in the iPad version

There are online and offline modes with up to five players. Challenge your friends or AI as you complete objectives to finish terraforming Mars. A single-player challenge is also available.

Carcassonne is a tile-based strategy game set in medieval times. The digital adaptation features 3D graphics and landscapes to enhance gameplay, and there are multiple types of AI for computer players. 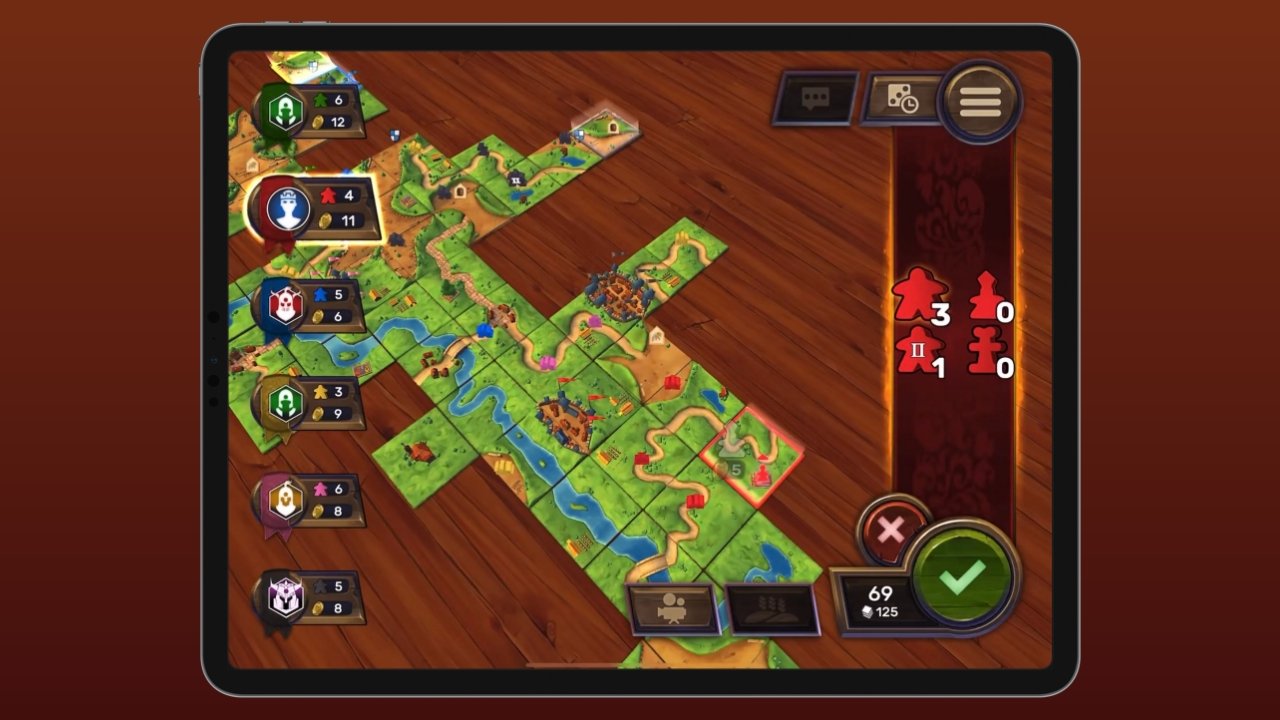 'Carcassonne' is a tile-based strategy game

Six expansions are available as in-app purchases that add new tiles and locations to your game. The River, Inns & Cathedrals, Traders & Builders expansions, and more can be purchased.

Up to six players can face off in person or online. This game features a pass and play mode for local multiplayer.

This Dungeons & Dragons board game is a turn-based strategy where players take on the roles of the masked Lords. Recruit adventurers, complete quests, and expand your city to gain control. 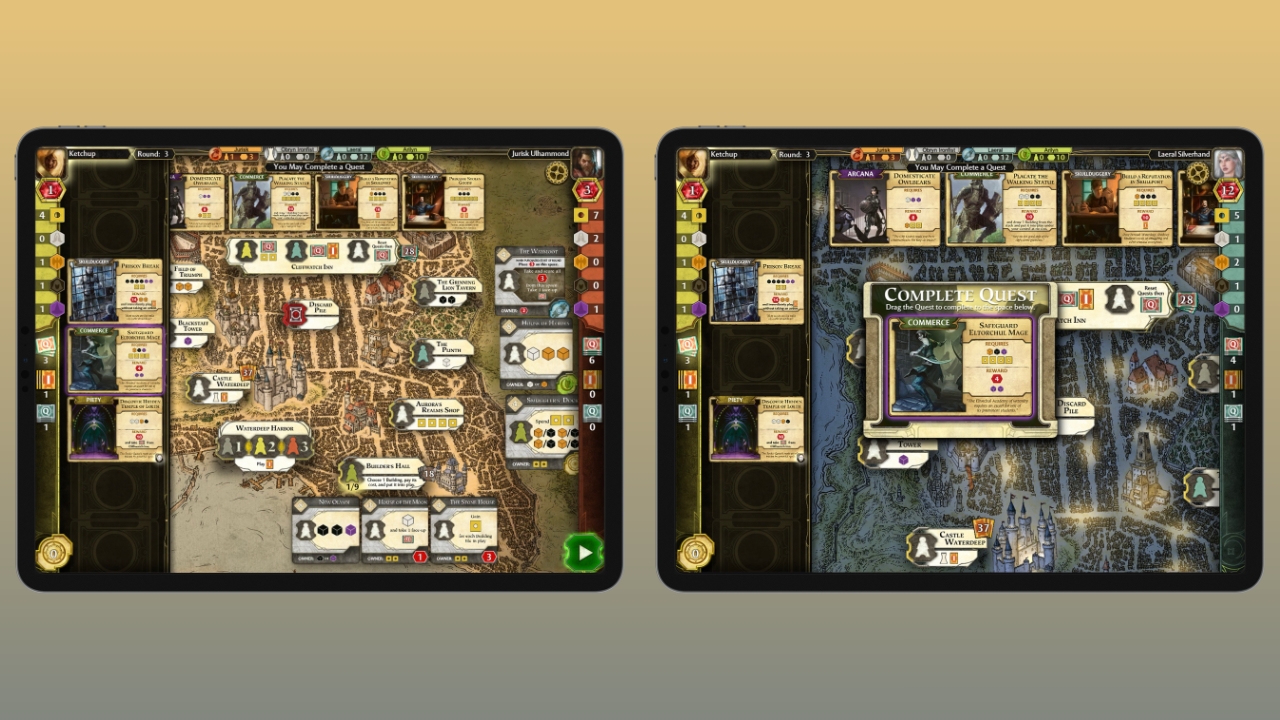 'D&D' meets board games in this adaptation for iPad

The game has local and online multiplayer of up to five players. Pass and play mode is also available for multiplayer on a single device.

The Settlers of Catan is an enormous board game with many rules and scenarios to play out. Play against computers or up to four friends for the most settlements, longest roads, and biggest armies. 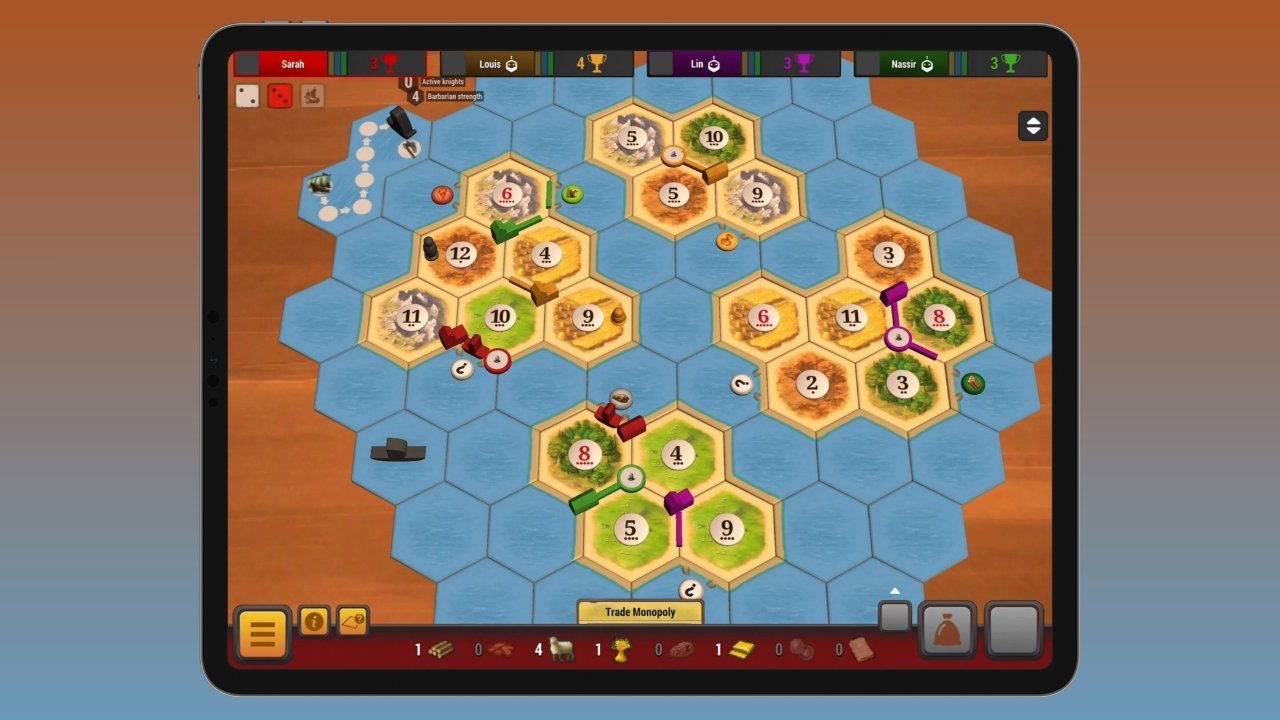 The classic iOS game has multiple expansions available as in-app purchases that add more scenarios to the base game. The Catan Universe app contains the classic game bundled with the card game and expansions in one app -- but requires coins to play.

One Deck Dungeon boils down the tabletop roguelike game experience into a deck of cards and dice. Choose your hero, face a challenge, and unlock one of 15 new talents after each adventure. 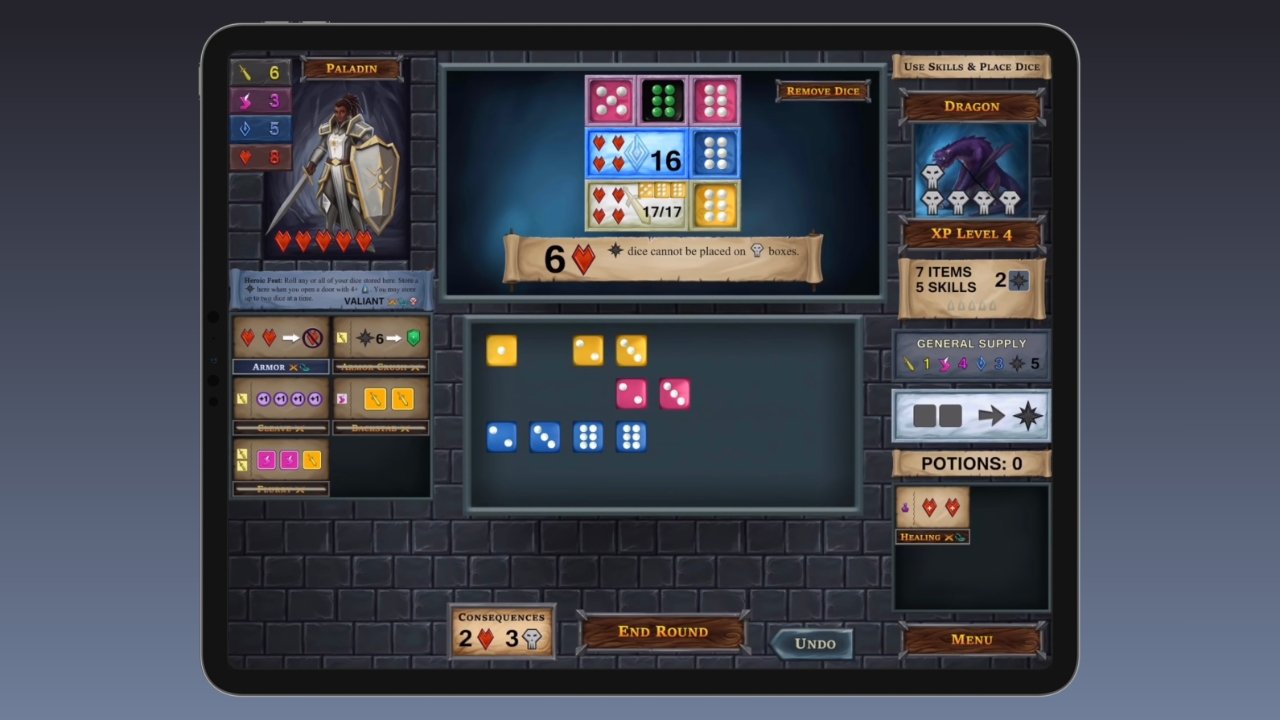 'One Deck Dungeon' speeds up roguelike games with pre-built characters

Play alone or with a friend in one of five challenges in the base game. There are multiple in-app purchases available to unlock more challenges and heroes.

Sentinels of the Multiverse

While it isn't a DC or Marvel-licensed game, this highly rated superhero title offers plenty of high-flying, comic-style excitement. Initially launching in 2011 as a tabletop card game, it made its way to iOS in 2014. 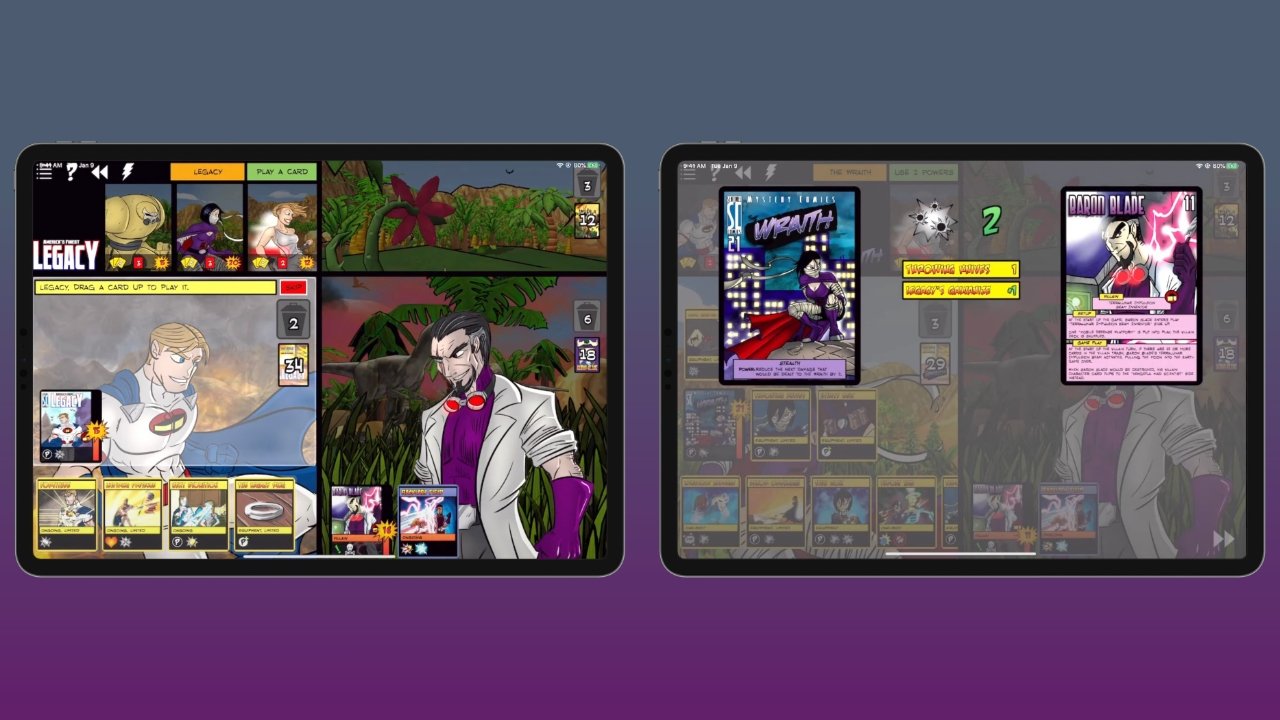 'Sentinels of the Multiverse' is a superhero-themed card game

The game is cooperative, allowing three to five people to team up as a collective of superheroes, battling villains throughout the journey. During each turn, you play a card, use a power, and draw a card -- a simple premise that can become more complex as you add combos and special abilities.

Sentinels of the Multiverse supports solo play with three to five heroes, pass-and-play support with local friends, and online multiplayer.

The iOS version works with iPhone and iPad, costing $0.99 with in-app purchases in the App Store. You can also buy the tabletop version on Amazon for $59.95.

Race for the Galaxy

The iOS version of Race to the Galaxy stays faithful to the award-winning 2007 tabletop card game it's based on. 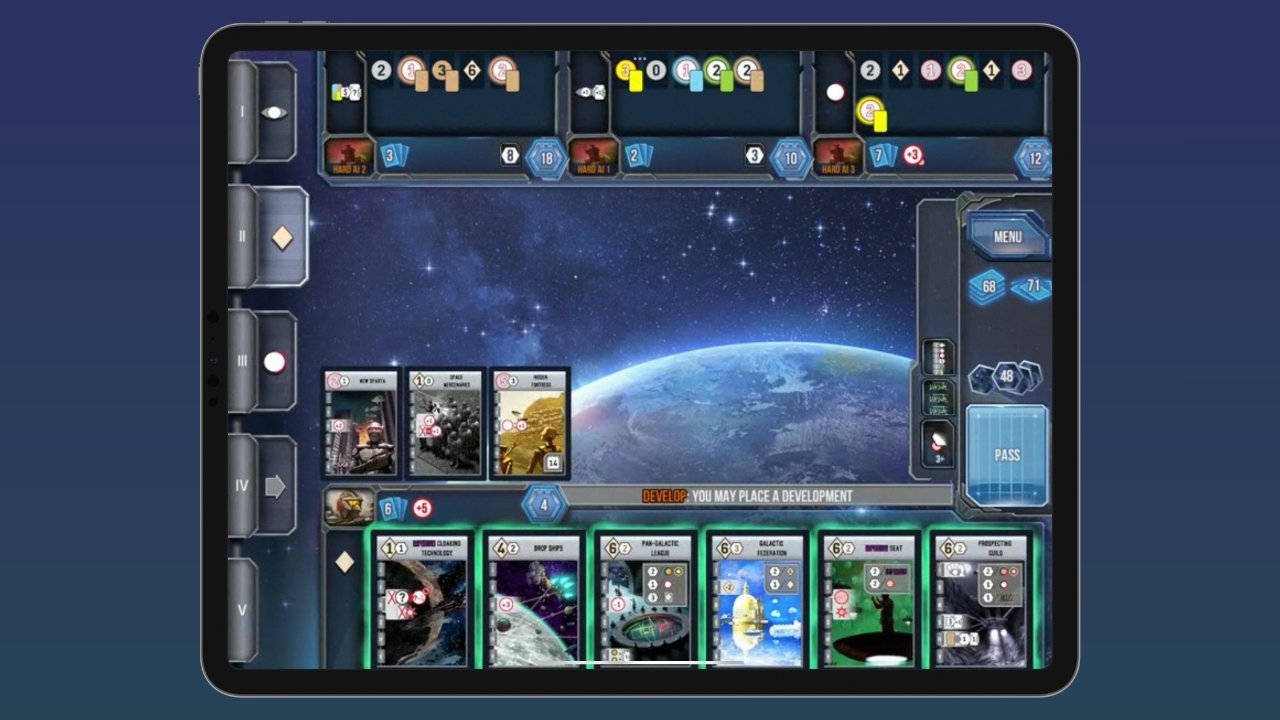 It may be a bit on the complicated side for casual players, but there are plenty of thoughtful gameplay mechanics for those seeking deeper card-based strategy. Each player is in charge of a burgeoning galactic empire, racing to finish with the most victory points.

One unique gameplay element is that, at the beginning of each round, each player chooses one of five phases: explore, settle, develop, produce, or consume. They then reveal their choices simultaneously, so other players can only strategize against their opponents' previous moves rather than their current turn. The way it unfolds also allows for asynchronous online play.

You can play Race for the Galaxy either solo against AI or with two-to-four online multiplayer, including private matches with friends.

Race for the Galaxy costs $6.99 with in-app purchases in the App Store. You can buy the original card game on Amazon for $34.99.

These are just some of the best board game conversions for your iPad, but there are many more options out there. Exploding Kittens (App Store $1.99/Amazon $19.99) is a fun card game, or Risk (App Store Free/Amazon $32.99) a strategy game where you take over the world. You can find other kinds of board games with digital-only options like Card Thief for free or Two Spies for free with in-app-purchases.