AppleInsider
Posted: February 21, 2021 7:48PM
in General Discussion
The PowerKick battery pack uses suction cups and a kickstand to differentiate itself, but it falls short of being a useful iPhone accessory. 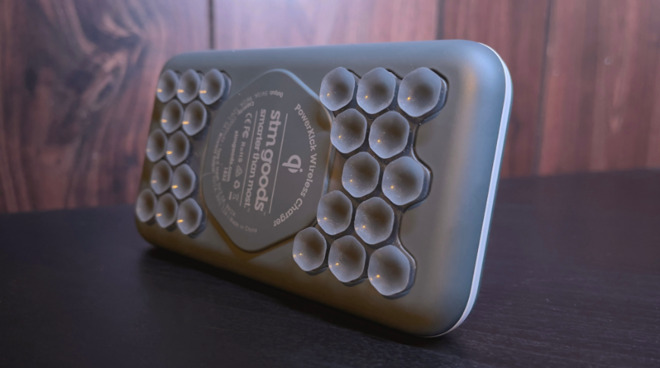 The PowerKick battery pack can't quite cut it despite unique gimmicks

STM wanted to solve the issues surrounding wireless charging and provide some convenience with some unique features. The PowerKick is a 10,000 mAh battery pack with 10W wireless charging, suction cup mounting, and a kickstand.

The device is fine, in concept. In reality, it is a bulky add-on that only solves a couple of problems while bringing new ones with it.

The battery is made to fit on any device, so it doesn't account for camera placement or other design anomalies. The kickstand works in portrait or landscape orientations, and since the iPhone is attached, it makes for a good viewing stand when charging the device. 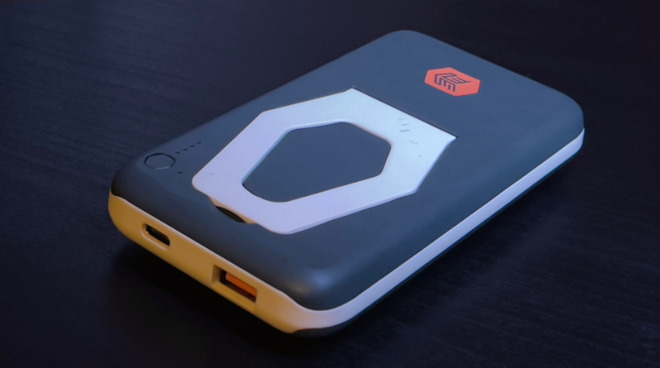 The design is unique compared to other battery packs, as it features a soft gray plastic enclosure with orange accents. The lighter portions of the case and kickstand are prone to scuffs and smudges, however.

The PowerKick has a honeycomb pattern to match the suction cup layout on the back. The button on the front wakes the battery for charging, alongside LEDs to indicate the power level.

Battery packs tend to be black or brown rectangles with industrial designs built for practicality. Users typically try to hide battery packs away and run a cable to the device being charged, but the PowerKick is designed knowing it will be used out in the open.

The suction cups attach to any phone with flat aluminum or glass backs. They are patterned around a central element that contains the wireless charging coils.

Users can also charge the battery via the USB-C or USB-A ports. The device charges wirelessly at 10W, but iPhones are limited to 7.5W.

We tested the PowerKick with the iPhone 12 Pro Max. This is Apple's largest iPhone, and so it has plenty of space on the back for an attached battery pack.

The PowerKick sticks on with ease, needing just a small press of the pack to the iPhone's rear side. Instinct would tell you to place the suction cups so that they are all flat on the iPhone's back, but this doesn't align the wireless pad properly. 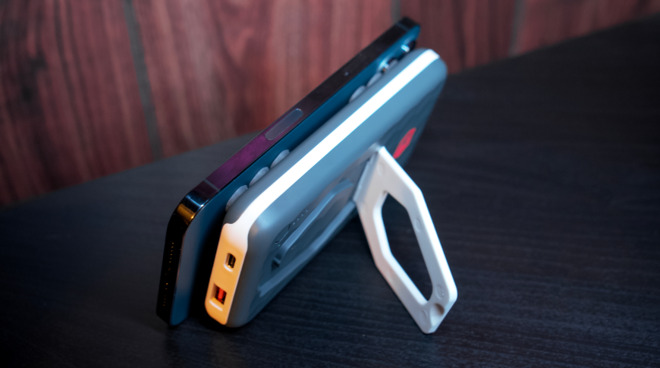 To wirelessly charge the iPhone with the PowerKick, you must move the battery higher so it is centered on the back of the iPhone. This is an issue for multiple reasons.

First, it covers the rear camera module. While users may not expect to take a photo while using this pack, it is a limitation, as the point of the battery pack is to allow continued operation of the device while charging.

Secondly, the suction cups cannot completely adhere to the back of the iPhone due to the camera module. The cups surrounding the module are left loose, which ruins the attachment integrity of the remaining cups.

The iPhone remains attached and wirelessly charges in such cases, but it is noticeable that some cups are not attached and that part of the iPhone hangs free from the battery pack.

During use, the suction cups are hit and miss. Sometimes the phone stays attached while watching a video, but the phone just slides off onto the table more times than not.

Using the battery pack as a kickstand works just as you'd expect. Despite issues with the suction cup system, the kickstand is a novelty that makes this pack more useful than standard packs. 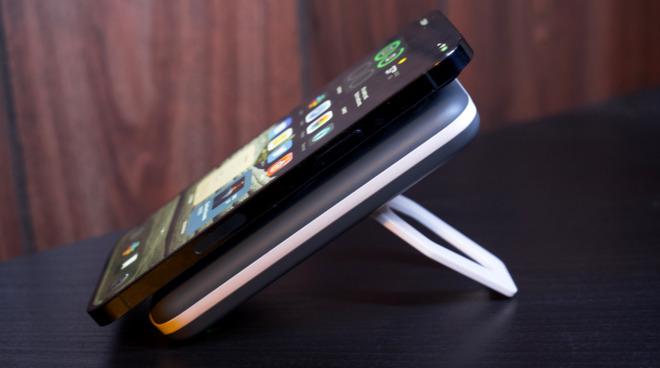 That being said, the kickstand is designed to offer two viewing angles when in portrait orientation, but fails to do so. The battery is higher up than expected due to the suction cup placement.

Should you buy the PowerKick?

The PowerKick has some gimmicks that make it stand out when shopping for a battery pack. However, the execution of those elements leaves a lot to be desired. The suction cup system isn't well-executed, and the kickstand only works in some cases.

Despite its shortcomings, this is still a battery pack. It charges your device wired or wirelessly via a 10,000 mAh supply. As a simple battery, it gets the job done.

If you're in the market for a battery pack, we can't recommend the PowerKick because it is priced much higher than competitors. For $20 cheaper, you can get the same specs in a similarly sized battery, but without the suction cups or kickstand. 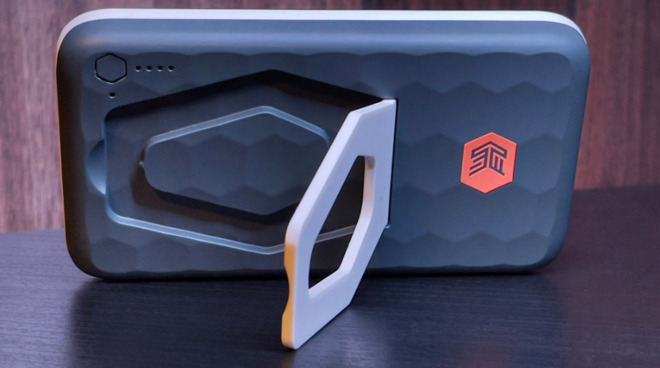 You'll have to decide if the kickstand is worth the $20 difference. In a world with MagSafe, this battery feels dated as an old solution to an old problem.

Get the PowerKick battery pack from STM's website for $69.95.