AppleInsider
Posted: June 27, 2021 2:31PM
in iPhone edited June 27
Mophie's new Snap+ Juice Pack Mini is a well-priced and well-designed compact portable battery that plays nicely with MagSafe, but there are some caveats that potential buyers should be aware of before purchasing. 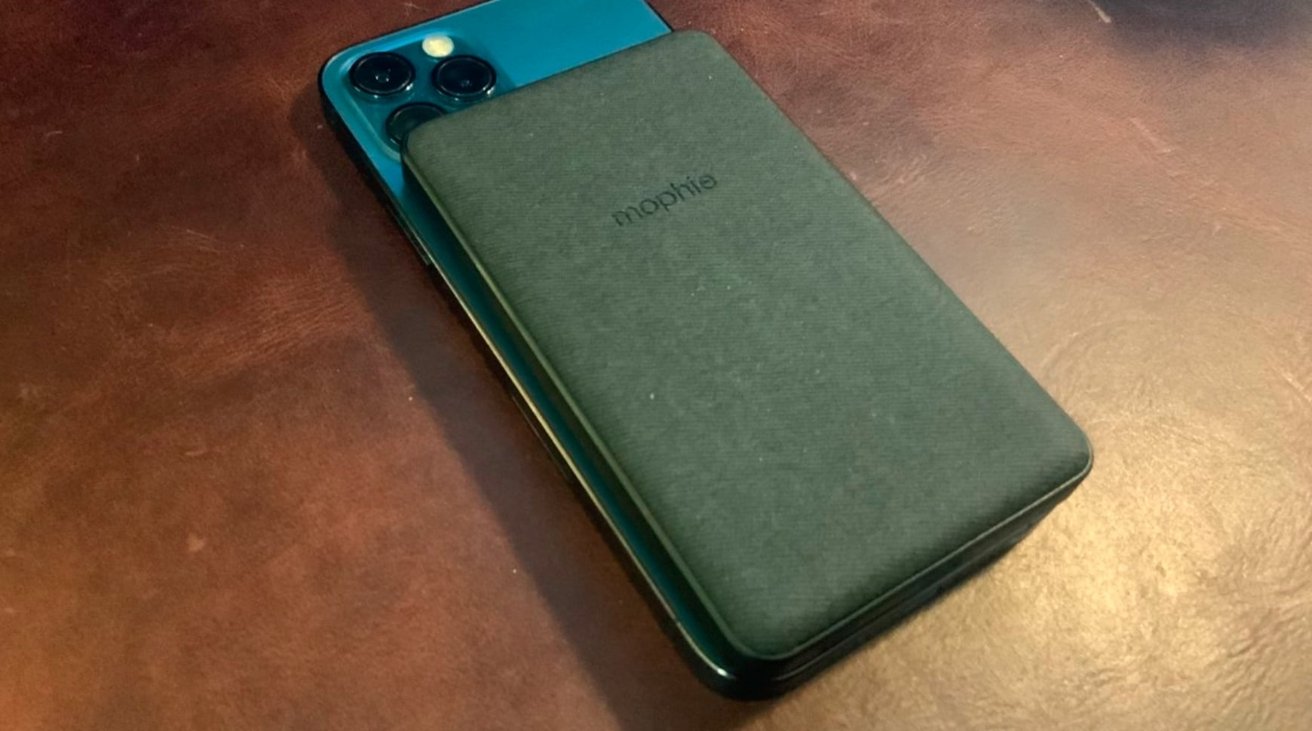 Mophie's Snap+ Juice Pack Mini acts like a MagSafe wireless charging pack, but crucially, it's not.

It would be easy to conclude that the new Snap+ Juice Pack Mini is MagSafe certified. After all, the company's own marketing repeatedly references Apple's MagSafe, noting that the battery pack is "compatible with MagSafe for iPhone 12 models."

However, that's not actually the case. Mophie's new battery pack simply offers Qi wireless charging, holding the battery in place on your iPhone 12 with a series of magnets that align with the MagSafe charger.

Because it's not MagSafe certified, that means the recharge capacity of the Snap+ Juice Pack Mini is just 7.5 watts -- half of what "true" MagSafe is capable of.

However, if you bring along a USB-C to Lightning cable and recharge that way, it increases the output to 12 watts.

That major caveat aside, as a small, pocketable 5,000 mAh battery pack, we like the Snap+ Juice Pack Mini a lot. Mophie says a fully charged battery can give an iPhone 12 in default settings a complete charge from 0 to 100%. 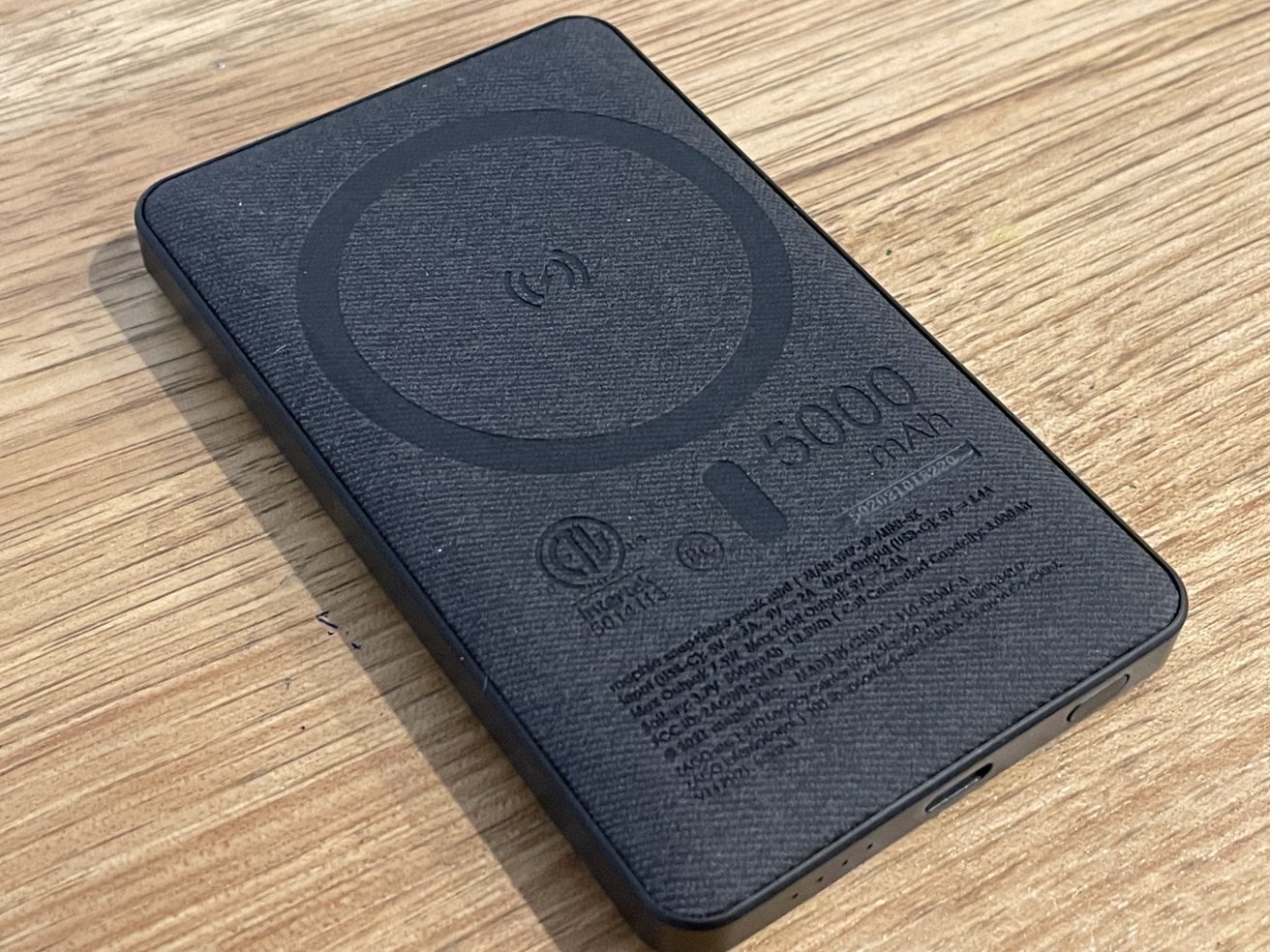 It holds a hefty 5,000mAh of charge for your iPhone, which it can deliver wirelessly.

Both the iPhone 12 and iPhone 12 Pro feature 2,815mAh batteries. That means owners of the iPhone 12 Pro Max, which boasts a 3,687mAh battery, won't get a complete recharge from this accessory -- but they will get some extra juice to finish out the day, if necessary.

In our own tests, with an iPhone 12 Pro, the handset recharged at a rate of about 1/3 capacity per hour (slower, naturally, as the phone approached 100%), but with enough juice to top off a near-dead phone. Recharging was a bit faster -- about half-capacity in an hour -- when using a USB-C to Lightning cable.

And for recharging the battery pack itself via its USB-C port, that was accomplished in about two hours. 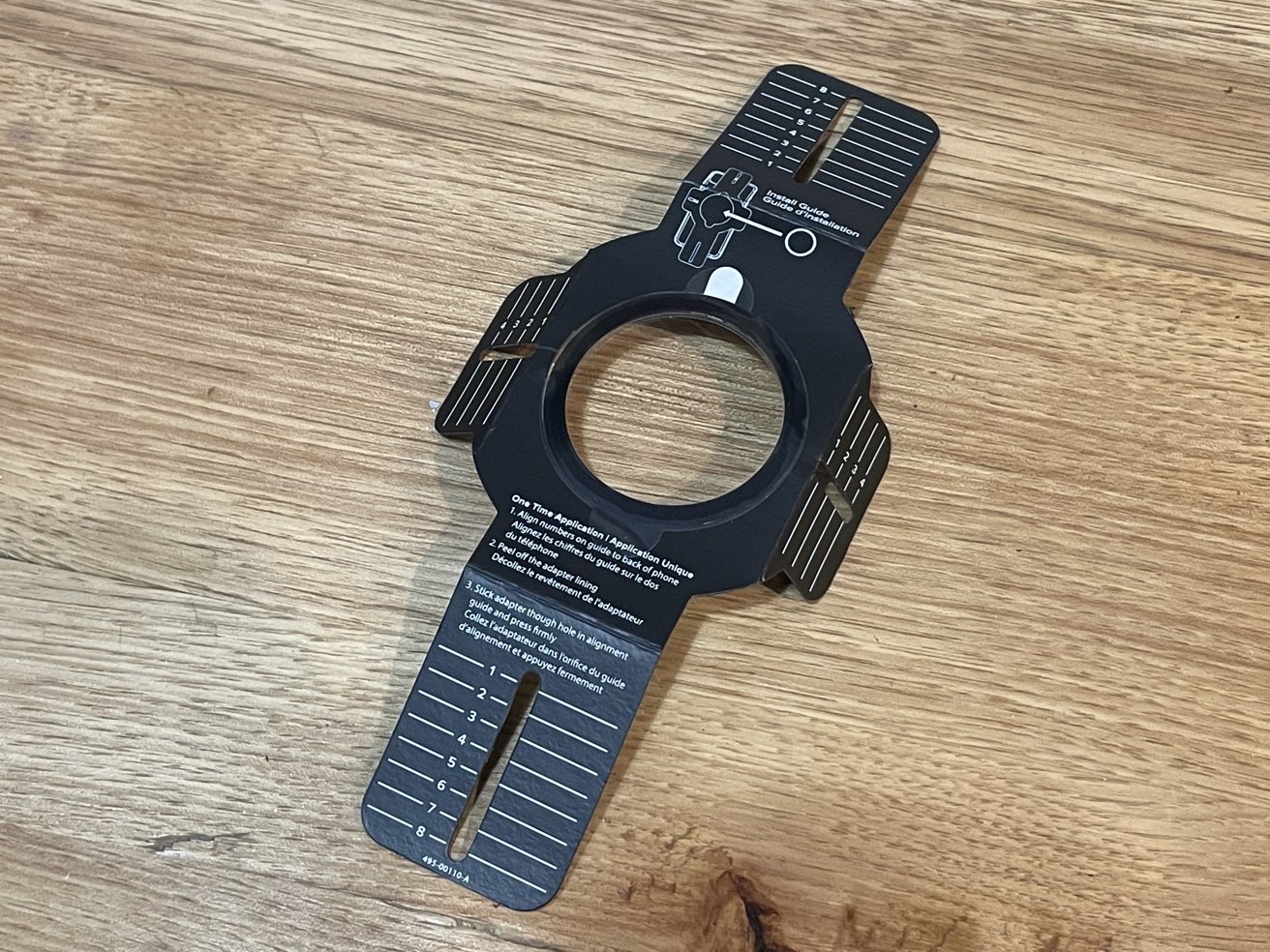 An alignment guide you get with your power bank.

Another plus of the product, along with the rest of the Snap accessory lineup, is that it comes with a "Snap Adapter," a metallic ring with an adhesive that can be attached to non-MagSafe compatible devices, like the iPhone 11.

With this adapter, older iPhones -- and other Qi-compatible devices -- will magnetically attach not only to the Mophie Snap+ Juice Pack Mini and other Snap accessories but also to Apple's own MagSafe accessories (albeit at a slower charging rate than the full 15 watts of "true" MagSafe).

The large circle magnet on the battery itself is plenty strong enough to attach and stay connected to our iPhone 12 Pro.

However, the small "orientation" magnet that resides below the main ring magnet is, to put it bluntly, worthless. 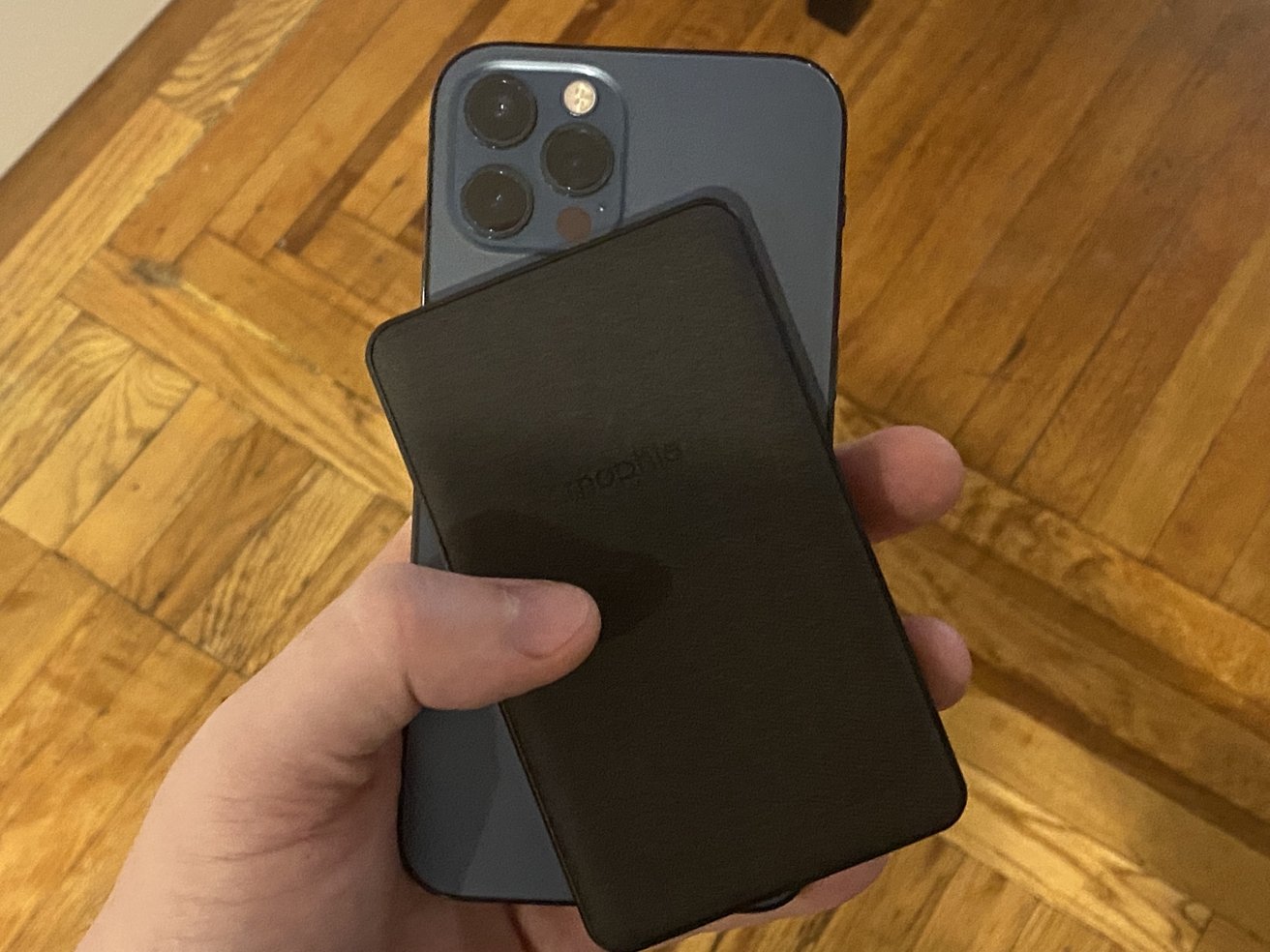 It's small enough to be easily dwarfed by the iPhone 12 Pro.

The good news is even if the battery is off-kilter, it will still charge, so if it gets knocked out of alignment in your pocket or bag, you should be OK. But it raises the question of: What is the orientation magnet's point if it doesn't do its job?

It should also be noted that Zagg's website initially and incorrectly stated the battery pack would be rechargeable through Qi. We tried this repeatedly on different charging pads and contacted Zagg after we couldn't get it to work, and the company later confirmed that it was an error on their site that has since been corrected.

If you plan to use the battery pack with MagSafe on Apple's iPhone 12 mini, be aware that the accessory obstructs one of the cameras. We didn't have an iPhone 12 mini to test, but Zagg says the battery will interfere with zoom functions, and it also hangs off of the bottom of the phone by 4.8mm. 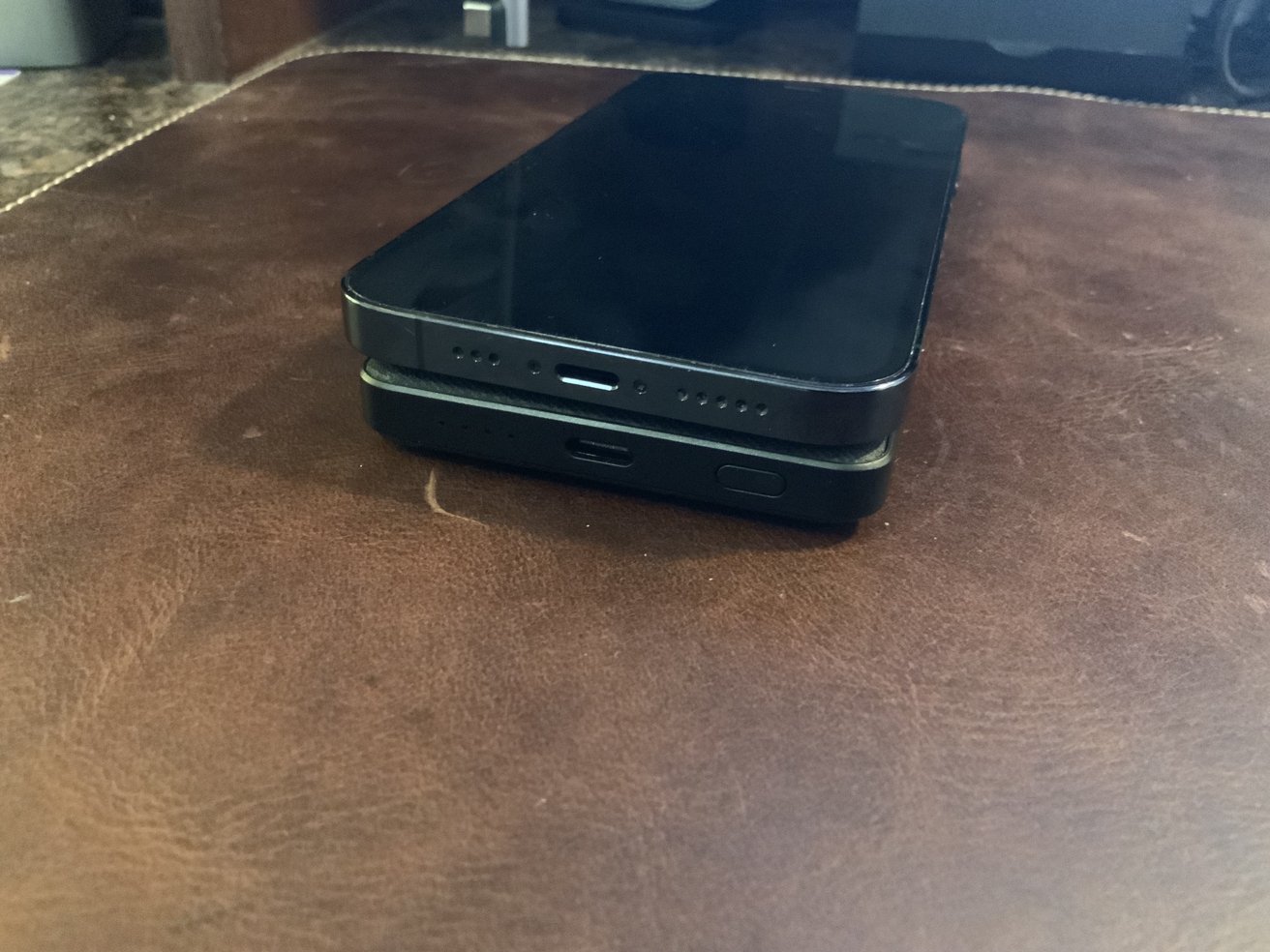 The base of the Snap+ Juice Pack Mini nicely mirrors the elements on the bottom edge of the iPhone.

The Snap+ Juice Pack Mini has one USB-C port, which recharges the unit at a speed of 15 watts. The port pulls double duty and can also be used for the aforementioned Lightning charge of the iPhone at faster speeds, but it really opens up the battery to be used for recharging anything, including other USB-C accessories like Apple's new Beats Studio Buds.

We can also confirm that the battery pack will provide power to an iPad Pro. Obviously, with its small capacity, it won't be completely refilling your iPad, but if you're in the single digits of remaining battery percentage, it could get you through until you find your way to a proper wall charger.

In our test, a 12.9-inch iPad Pro went from 73% to 100% in about an hour and a half, and there were still one out of four dots of capacity shown on the battery pack.

The USB-C port also has the added benefit of indirectly adding USB-C charging to the iPhone. If you're the type of person who wants to go all-in on USB-C and ditch your Lightning cable, or you don't have a Lightning cable available, the Mophie Snap+ Juice Pack Mini is a viable solution. 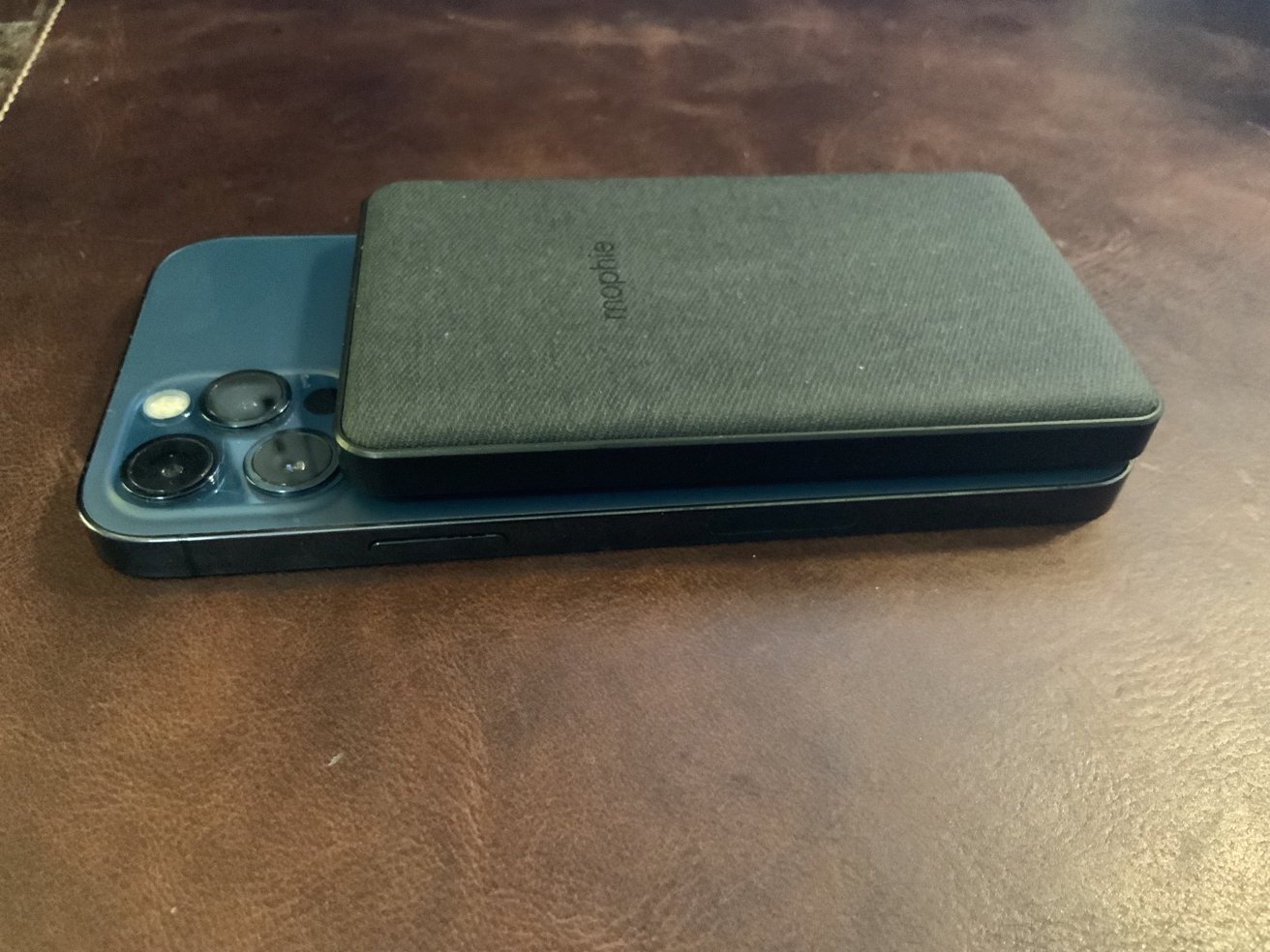 The Snap+ Juice Pack Mini sits quite nicely on the iPhone's back, hugging the space below the camera module.

The final factor to consider here is the price. At $49.95, despite its shortcomings, it's not a bad deal for an ultraportable, well-designed battery that works with MagSafe and offers USB-C output for other devices.

Apple is rumored to be working on its own MagSafe battery pack, which will presumably charge at the full 15 watts capable of the wireless charging standard. 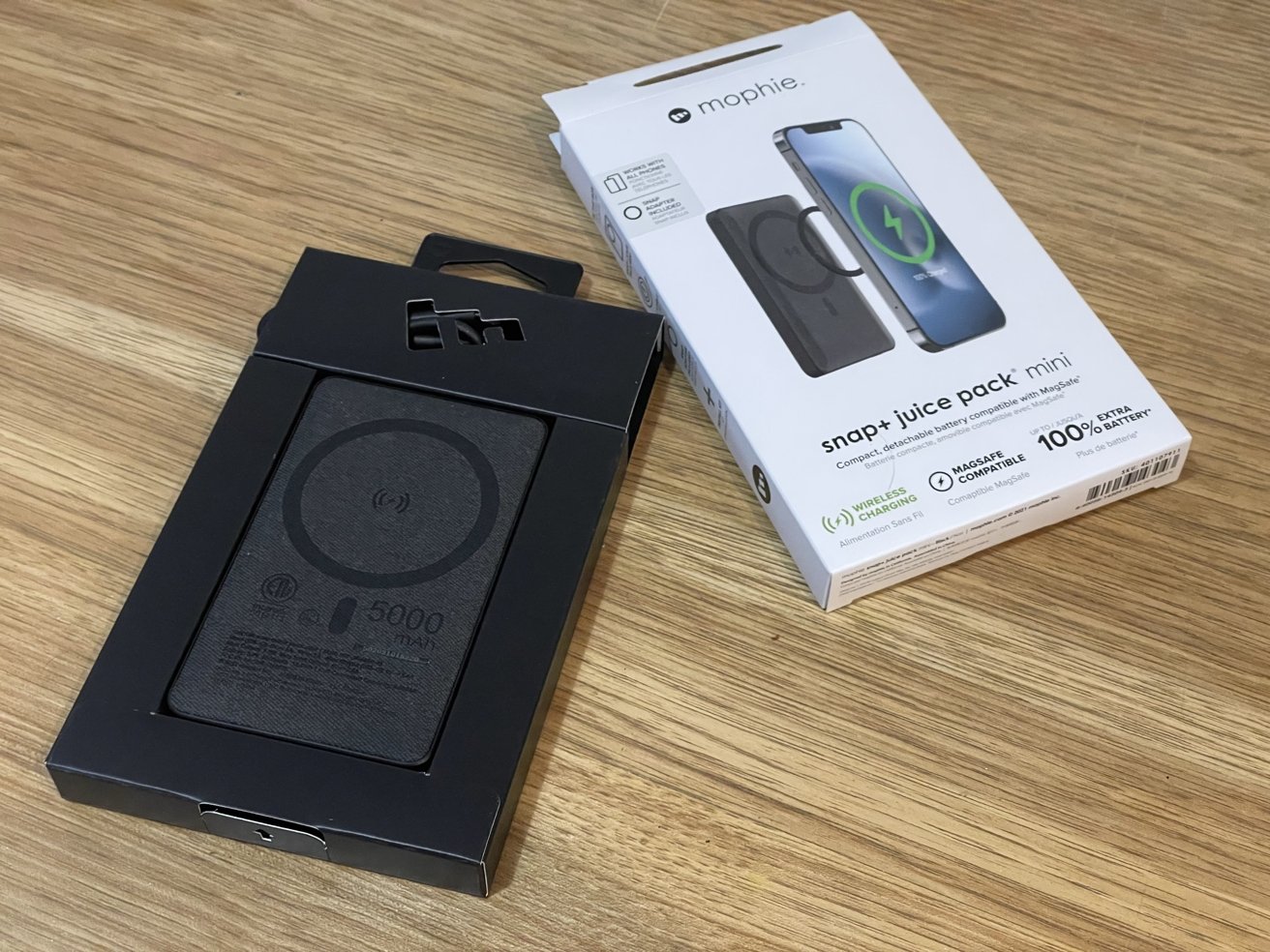 Mophie's packaging is minimal, but does the job.

It's far from perfect, but there's still a lot to like about the Mophie Snap+ Juice Pack Mini. It'll easily recharge your iPhone in your pocket or while being used, and it works with other small accessories with a USB-C cable, and it's priced reasonably for an accessory with these capabilities.

Just don't buy into the MagSafe marketing hype, because this little battery is not truly pushing Apple's wireless charging standard to its full potential.