AppleInsider
Posted: July 17, 2021 11:10AM
in iPhone edited July 17
Mophie's MagSafe-compatible Snap+ Wireless Vent Mount is a somewhat odd product, offering an affordable magnetic puck that mimics Apple's own MagSafe charger, but only at half the charging speed of the official accessory. 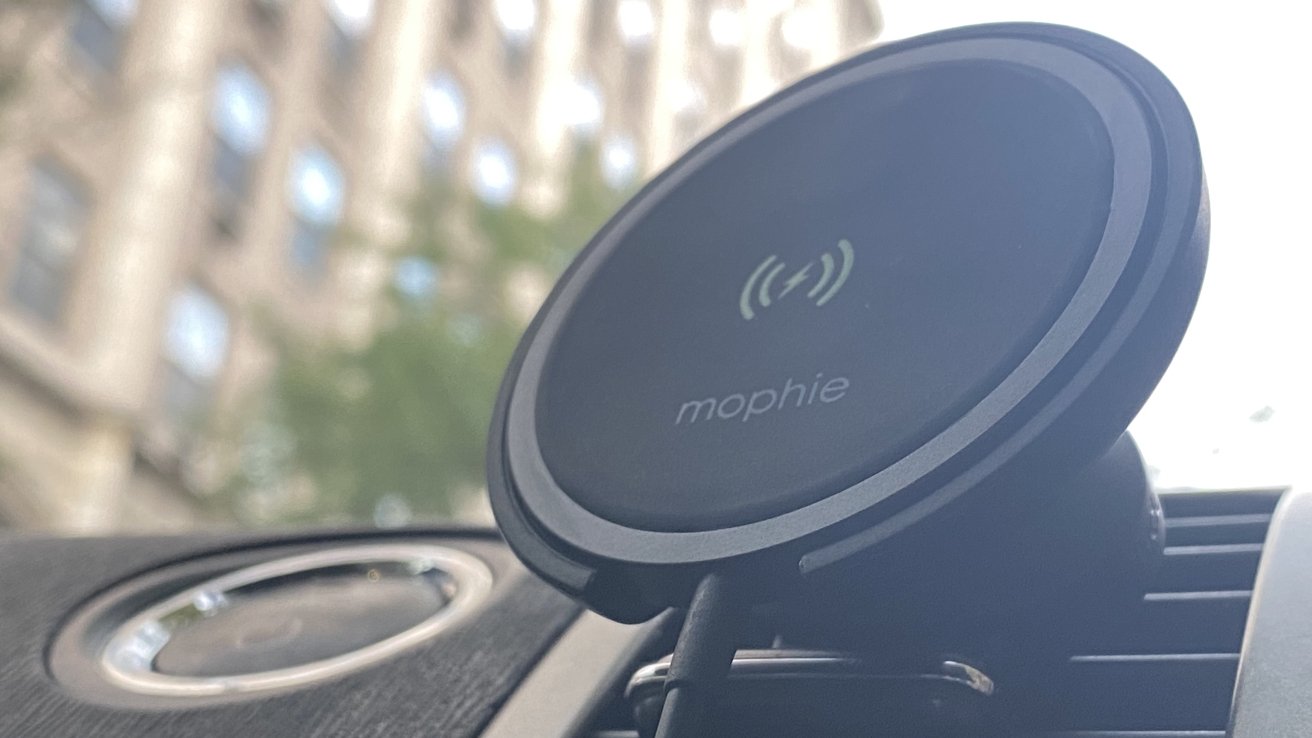 Mophie's Snap+ Wireless Vent Mount is unique, as it ships with its own custom-designed removable magnetic charging puck that works essentially the same as MagSafe, just not as fast as Apple's own cable.

Using the puck and Snap+ magnetic adapter with an Android phone, users will get up to 15-watt wireless charging -- the same as MagSafe. But iPhone users aren't as lucky, as standard Qi wireless charging on the iPhone is capped at 7.5 watts.

Why is this? Because like other Mophie Snap+ accessories, including the Juice Pack Mini, the Wireless Vent Mount is like MagSafe, but not actually MagSafe. 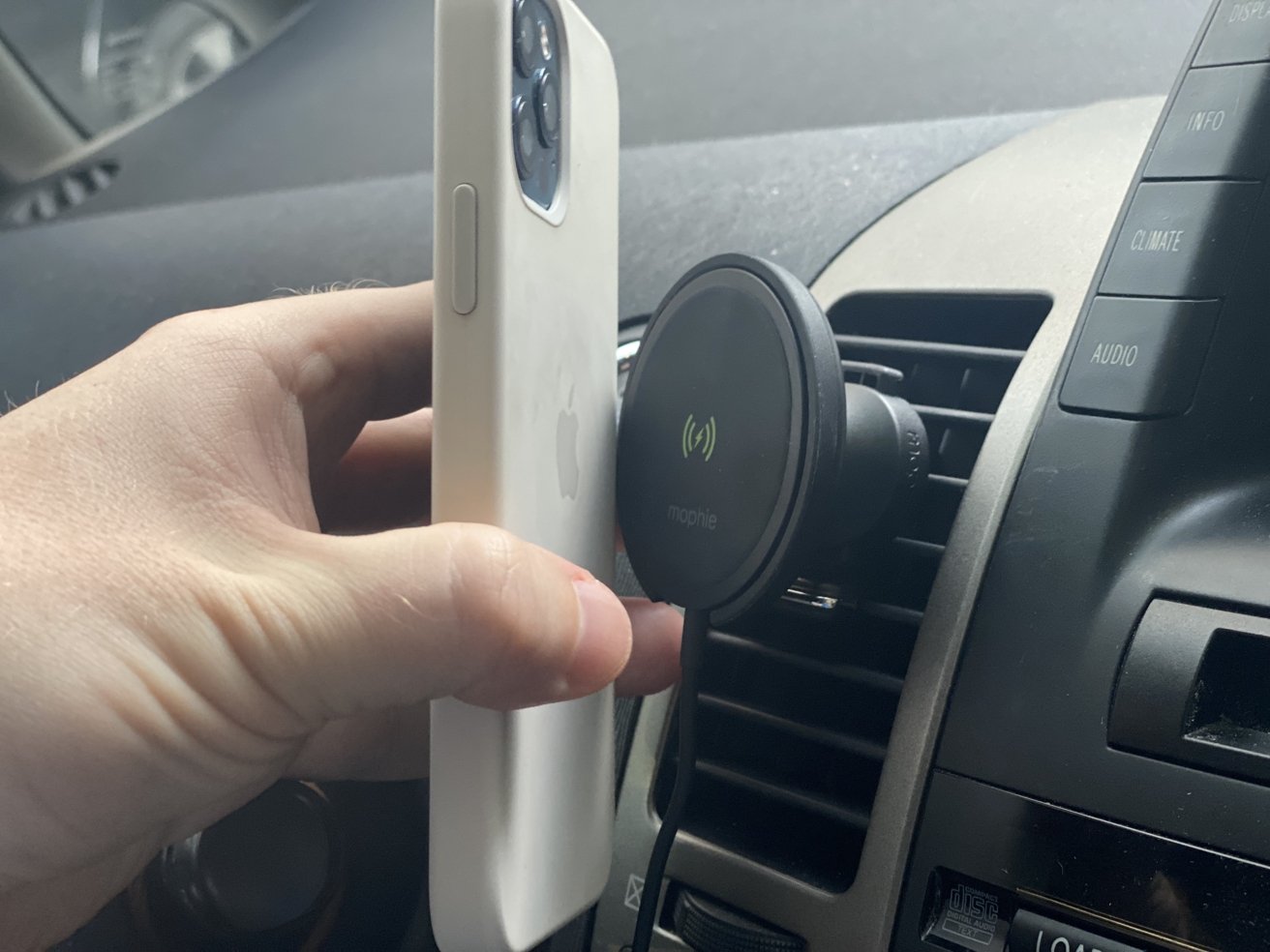 The Mophie Snap+ Wireless Vent Mount works with MagSafe, but is limited to a slower charging speed.

Mophie has employed a combination of magnets to match the MagSafe magnet placement in the iPhone 12 lineup, as well as standard Qi wireless charging, which has been available on the iPhone for years. The result is a mishmash that technically works with MagSafe, but avoids Apple's MagSafe licensing fees.

In fact, the vent mount portion of the product fits Apple's MagSafe cable just fine, meaning users could swap out and get faster charging with an official cable if they wanted.

An affordable alternative, with caveats

So, what's the point of this product? Price.

The Mophie Snap+ Wireless Vent Mount is priced at $49.95, and that includes the magnetic puck, the ball and socket joint that connects to your air conditioner vent, and a USB-C power adapter for your car's cigarette adapter (just one USB-C port). 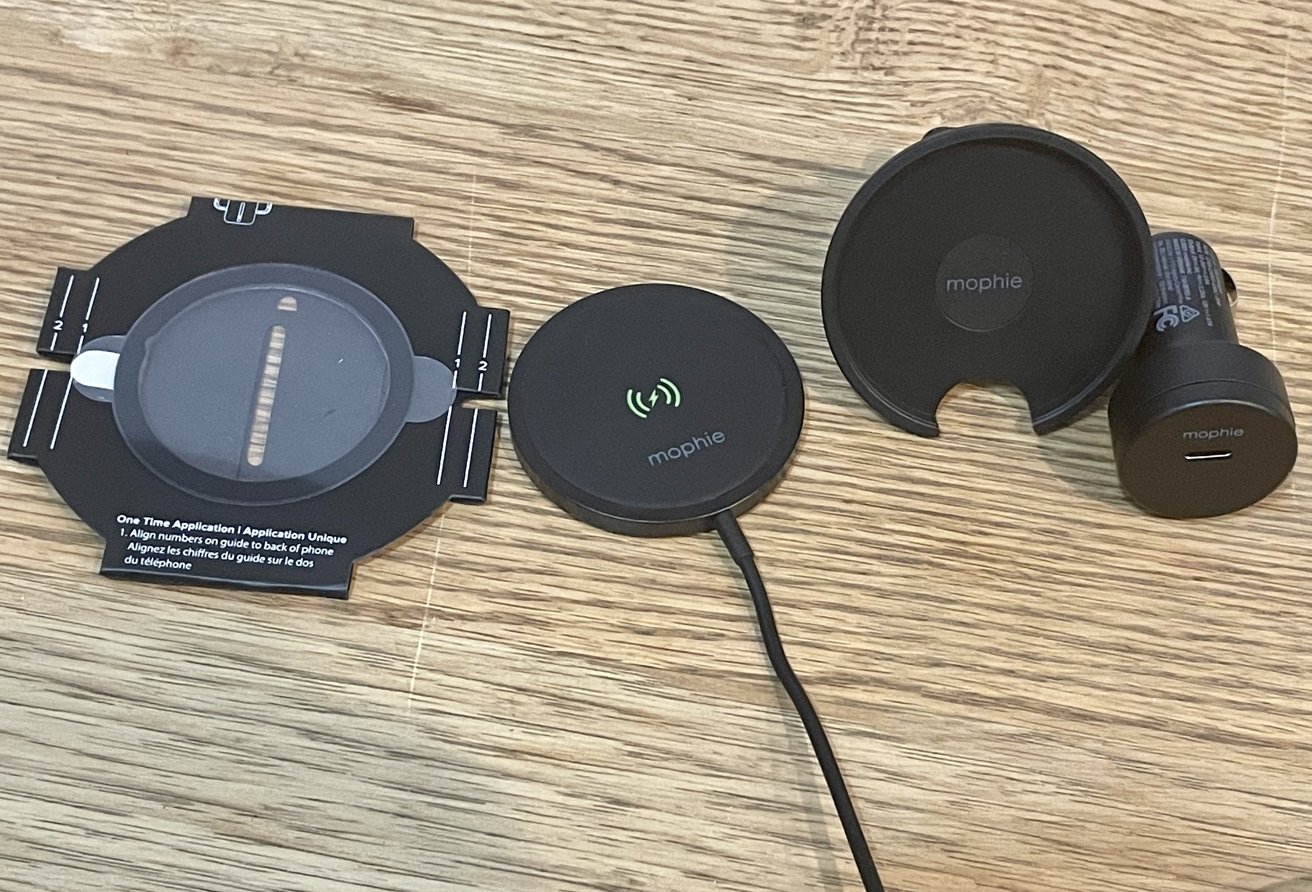 Everything you need is in the box (except for a longer cable).

In comparison, if you wanted to buy an alternative accessory that simply holds Apple's official MagSafe charger, you'd need to plunk down $39 for the MagSafe cable from Apple, plus another $15+ for a USB-C car charger -- and that doesn't include the $15 to $35 you will spend on the accessory to hold your MagSafe charger.

That said, there are a few things we wish Mophie had done to improve the Snap+ Wireless Vent Mount. Shipping it with a fixed cable that must be entirely replaced if it frays or breaks is the first that comes to mind.

A puck with a female USB-C port, allowing for the cable to be swapped or replaced, would be a potential improvement over official MagSafe, perhaps helping to offset the slower charging speed.

The other issue is cable length. At 3 feet, it wasn't a good length for us to set up a discreet install from inside our center console to the front dash. If Mophie had offered a longer cable, it would be another potential way to differentiate from and improve upon Apple's cable. 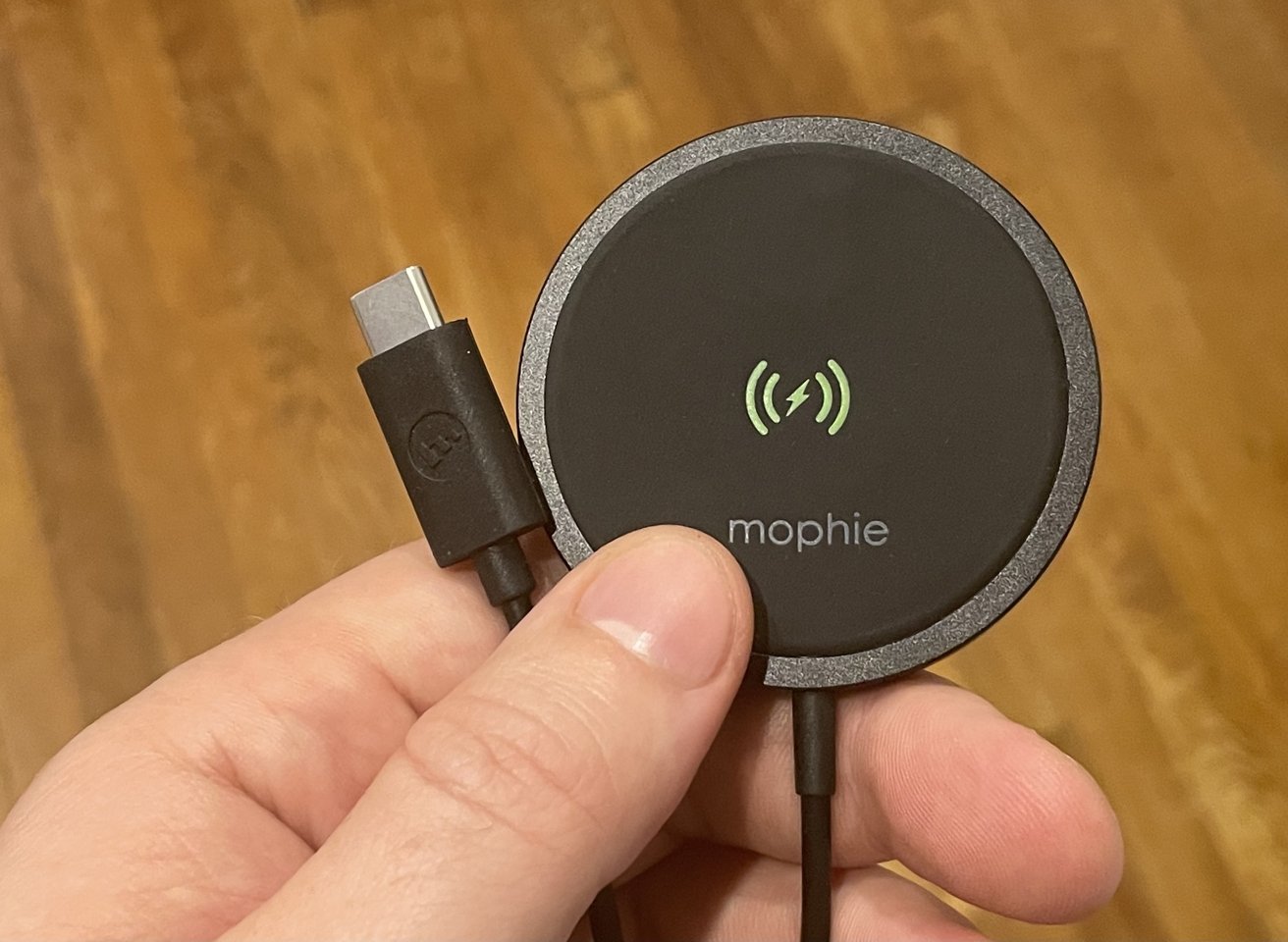 As it stands, beyond price, the only real advantage the Mophie magnetic puck has over Apple's official MagSafe charger is that the puck and cable are black, while Apple's cable only comes in white.

In terms of magnetic strength, the puck works fine. We drove with our iPhone 12 Pro mounted both in a silicone case and out of it, over brick roads in New York City in a 2008 Prius, and the iPhone did not fall from the magnet once.

Similarly, the ball-and-socket vent mount didn't lose its positioning, though this may also depend on the strength of your AC vent. Notably, the Mophie mount is small and does not include any lower stems to help brace or maintain positioning, so some car owners may be disappointed.

The magnetic puck can be removed from the mount for freedom of use within the car. The puck itself does not attach to the mount magnetically, however -- it's easiest to remove the puck by first removing your iPhone, then pulling the puck out from the plastic holder.

The product also ships with Mophie's Snap+ adapter, which not only allows older iPhones to connect to Snap+ and MagSafe accessories, but also brings Qi-compatible Android devices into the fray.

As for charging speed, official MagSafe already felt very slow compared to what you can get with a 30-watt charger, so what you get here is even slower, but suitable. If you're streaming music over Bluetooth and using GPS and going on a long road trip with the screen on the entire time, you'll be able to keep your phone topped off, but don't expect this to overcome heavy usage or provide a quick recharge with its 7.5-watt output. 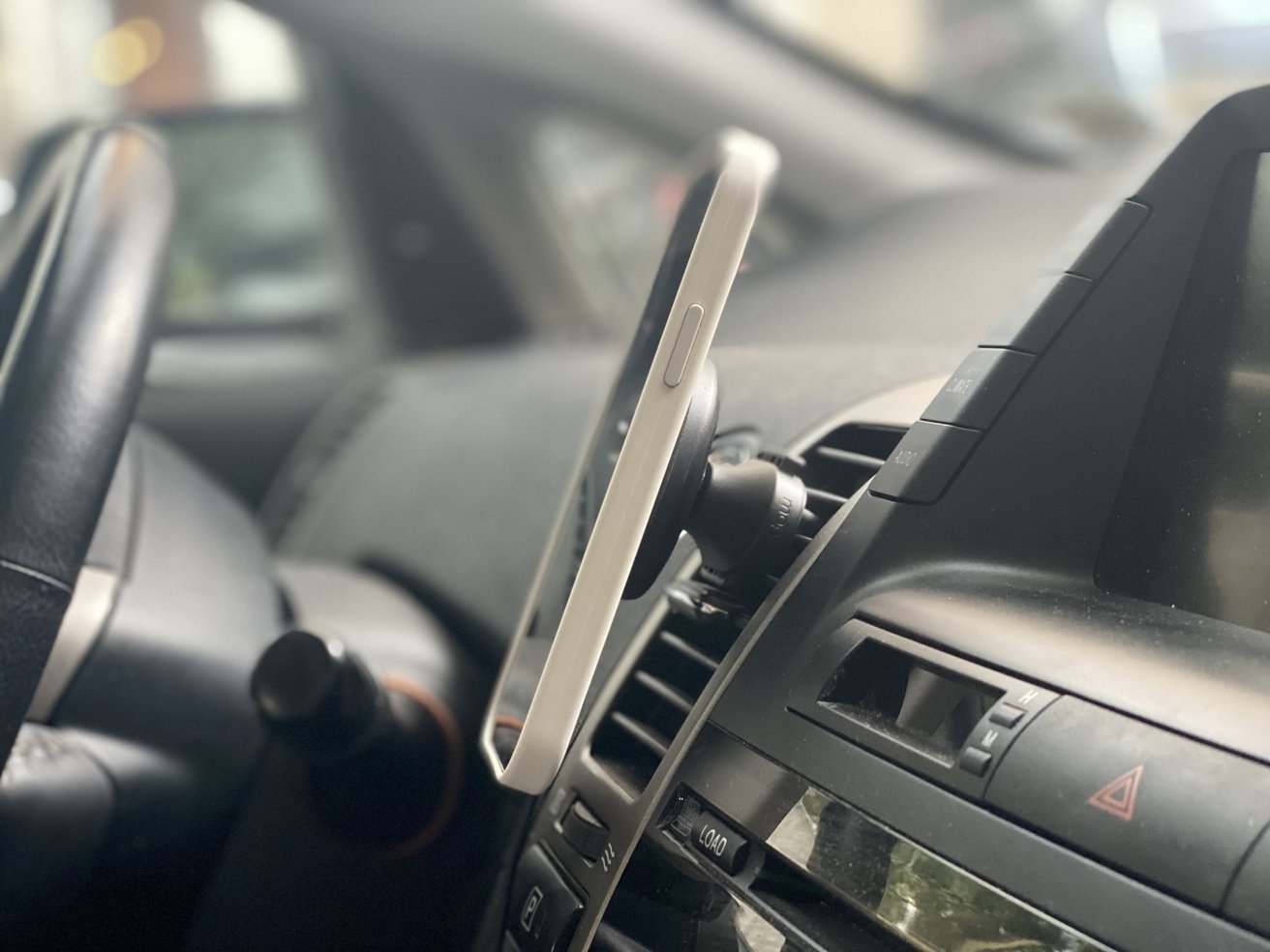 The mount was strong enough to hold an iPhone 12 Pro, in our testing.

The Mophie Snap+ Wireless Vent Mount is far from perfect, but for its price, it cannot be dismissed outright.

At $50, it's only $10 more than Apple's own MagSafe charger, and it includes a serviceable, but slow, replacement cable with strong enough magnets to hold an iPhone 12 Pro on a bouncy ride.

If you wanted full 15-watt charging, we suppose you could swap Mophie's knock-off MagSafe for the real thing, as Apple's charger fits just fine in the vent mount. But then you've turned a $50 purchase into a $90 one, which negates the main selling point of this product.

It's also worth considering that Apple's own newly launched MagSafe Battery Pack for iPhone 12 only charges at 5 watts, due to heat considerations. So although the Mophie cable is operating at half of the potential capacity of MagSafe, it's still a faster option than Apple's $99 battery accessory when you're in your car. Plus you get the added benefit of a convenient magnetic mount.

If you're looking for a simple, affordable way to charge and magnetically mount your iPhone in your car, you'd be hard pressed to find a better option on the market at the moment than the Mophie Snap+ Wireless Vent Mount. It's got everything you need in the box, even if there is plenty of room for improvement.

The Mophie Snap+ Wireless Vent Mount sells for $49.95 at parent company Zagg, but AppleInsider readers can exclusively save 20% on the accessory with promo code INSIDER20.