AppleInsider
Posted: August 17, 2012 2:42PM
in iPad edited January 2014
Over Apple's objections, Samsung was granted the right to present pictures of a tablet newspaper concept from 1994 as evidence of prior art refuting the originality of its iPad design patents.

According to a report by Bloomberg, U.S. District Judge Lucy Koh rejected Apple's objections, stating the "issue should go to the jury.?

Samsung sought to present photos and a video deposition of an electronic newspaper concept developed by Roger Fidler at Knight Ridder, evidence that the U.S. Court of Appeals for the Federal Circuit in Washington had earlier determined to be significantly different from Apple's patented iPad design.

The so called "Fidler tablet," like other electronic reader products and concept art, was only similar to the iPad in having a rectangular shape, rounded corners and a flat back, the court ruled. Apple hoped to leverage that decision in blocking its presentation in the Samsung trial.

"It?s strange to me that we?re just hearing this now," Koh told Apple's attorneys in overruling their objection. "If you thought the law was so clear cut, I would?ve appreciated that this was brought up sooner." She said Apple could bring up its issues with the evidence in cross examination in front of the jury.

Judge Koh found Apple's patented iPad design sufficiently original to order a preliminary injunction on sales of Samsung's Galaxy Tab 10.1 in the US. At the same time, she also noted that Samsung had raised substantial claims of invalidity of the patents.

Pictures, but it didn't happen

In Samsung's video deposition of Fidler, he describes his mockup concept, saying he ultimately wanted to create a stylus-free touchscreen that would be thin and have a touchscreen flush with its edges just like the iPad. However, Knight Ridder, his employer at the time, was uninterested in building such a product.

Apple challenged Samsung to produce an actual prototype of the concept, which apparently does not exist. Instead, all that remains is a conceptual video that portrays what appears to be a Pantech e-reader displaying simulated images from a CRT, as the technology to deliver such a device didn't exist in 1994. 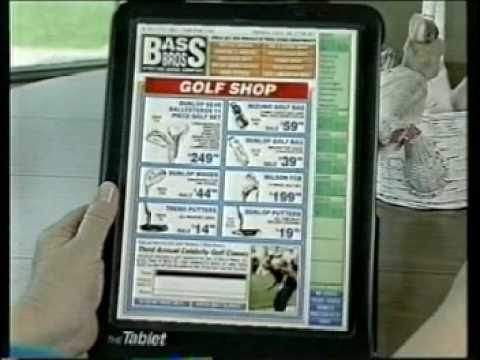 Apple itself commercially launched its Newton MessagePad in 1993, but that device was both thicker and smaller, with a profile of a paperback book and reliant upon a stylus due to the constraints of available screen sensor technology. At over $1000, the device remained unaffordably out of reach for most consumers throughout the 1990s.

Apple's Newton did, however, result in the development of ARM's efficient mobile chips that Apple subsequently used in the iPod, and which power virtually every mobile device today.

While the Fidler electronic newspaper conceptually pioneered the potential uses of mobile technology, pictures of it would not be confused for an Apple product today, as Samsung's Galaxy Tab has by consumers. Apple's iPad design patents seek to protect the product's readily identifiable design, not all of its potential uses in general terms.
«1234»