Yesterday's Sony's PlayStation 4 announcement sounded like a condensed version of Apple's keynotes from the last decade: a deemphasis of optical media in favor of digital downloads (beginning for Apple in iTunes Store 2002 and culminating in the Mac App Store in 2010, enhanced with iCloud access announced in 2011), hardware moving from the PowerPC architecture to an x86 processor (as Macs did in 2006), gesture based input (imported to the Mac from iOS in 2009), a Suspend/Resume/AutoSave architecture (unveiled for OS X 10.7 Lion in 2010), and social integration (like Apple's Game Center and Facebook ties outlined in 2012).

Notably missing from Sony's event was significant recognition of the "Post PC" era that Apple has focused its attention on, beginning with the iPad's unveiling by Steve Jobs three years ago in early 2010.

Sony already knows this Post PC shift has had a major impact on portable gaming, having felt the impact on its PlayStation Portable and its follow up, the PlayStation Vita, first hand. But it didn't give any hint in its presentation that it recognizes Apple's potential to deliver a new assault on living room gaming with its iOS mobile devices (as opposed to another centralized gaming console appliance), even while portraying its own efforts to expand in the "smart TV" market with a graphic that appeared inspired by Apple TV (above).

Instead, Sony seemed comfortably rooted in the PC era, effectively almost ignoring Apple's iOS App Store platform, recently highlighted as having the potential to "kill PlayStation, Wii U and Xbox" by a founder of Microsoft's Xbox gaming efforts.

If Sony were trying to build the low cost, game oriented Mac that many fans had wished Apple to release years ago, it appeared to be right on target. Of course, Sony really has Microsoft's two pronged Windows PC and Xbox gaming initiatives in its targets, not Apple's tiny fraction of the games market represented by the Mac.

Microsoft initially released its original Xbox in 2001 in an effort to derail Sony's increasing presence in gaming with the original PlayStation, out of fear that it might lose the Windows PC gaming empire it worked so hard to build in the 1990s. While the first Xbox had little impact, its Xbox 360 successor initially outsold Sony's parallel offering, the most expensive PS3 console.

Sony said it hoped to ease PlayStation games development (a notable problem for the PS3 and its unique, complex Cell processor architecture). Making its next generation PS4 (due in time for the 2013 holiday season) more architecturally similar to a desktop PC would help in that regard.

Sony is also adding a small touchpad region to its new PS4 controller (below). However, rather than adding a full tablet-style accessory as Nintendo did for its own new Wii U console update, Sony alluded to plans to support various (but as yet undefined) kinds of integration with smartphones, tablets and its own Vita dedicated mobile game device.

Sony's brief mention of integration with mobile devices is notable given that both Sony and Nintendo have seen their mobile gaming initiatives decimated by casual gaming on smartphones, iPad and iPod touch, led by Apple's iOS App Store gaming initiatives.

When the potential for Apple's iPhone to entrench upon Nintendo's DS and Sony's PSP was first noted in early 2008 the idea was met with scoffing criticism. But by the end of that year, industry leaders were stating that the shift was already well underway. By the end of 2010, it wasn't even a controversial idea that consumers had shifted in droves from dedicated portable gaming devices to general purpose mobile devices.

Sony's new Vita-branded PSP replacement has been an underwhelming flop. So why is Sony virtually ignoring Post PC devices to focus attention on another big console that's more like the conventional PC than ever? It's no doubt related to the fact that Sony has seen some success in selling PCs, but very little in selling phones, tablets, and most recently, its new Vita gaming device. Additionally, Microsoft has successfully kept high end gaming tied closely to the Windows PC, something even the original, Linux-running model of the PS3 couldn't seriously detract from. Sony's clear vision for the future of gaming is very PC.

Will Apple expand Post PC games into the living room via Apple TV?

Like Sony, Microsoft is rumored to have its own next generation Xbox console in the pipeline, while Nintendo is already selling its refreshed Wii U. But Apple now has the potential to seriously break into the living room games market as well, leveraging the strength of its existing iOS platform.

However, after gaining the ability to wirelessly deliver mirrored video from iOS 5 devices (and later Macs) via AirPlay in 2011, Apple TV began being used to deliver interactive, multiplayer titles that combined an iPhone or iPad "controller" with Apple TV's big screen HDTV output. One notable example of this type of HDTV iOS game is Real Racing 2 (below). 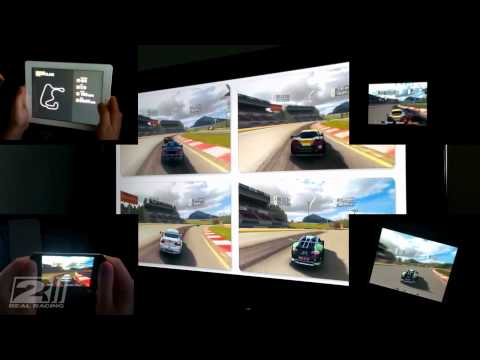 While many observers have speculated that Apple will open an "Apple TV App Store" for TV-based games and other apps, current generation Apple TV devices are ill equipped to provide a gaming platform even remotely competitive with existing, dedicated game consoles. The past two generations of Apple TV have low powered processors (an iPhone 4 style A4 or a scaled down A5X), limited system RAM (256-512MB) and relatively little storage (8 GB).

In the Post PC era, however, Apple doesn't need to offer a high powered central console or develop and maintain a separate App Store specific to the TV. There is already a large installed base of hundreds of millions of iOS mobile devices that pack more graphics power, memory and storage than the current Apple TV device. All Apple needs to do is encourage development of iOS apps that take advantage of AirPlay.

Virtually every iOS game already supports AirPlay Mirroring automatically (below: Batman Arkham City Lockdown for iPad, on HDTV via AirPlay). Several titles actually make special use of AirPlay to deliver alternative graphics (as noted above), allowing users to interact with a private iPad display while showing different graphics on the HDTV screen.

Both Microsoft and Sony are already tying these basic smart TV services into their consoles, However, these vendors must charge far more for their hardware than Apple TV because the console itself has to be powerful enough to render games' HD video graphics. With AirPlay and Apple TV, this task is delegated to your iPhone or iPad.

The PS4 and upcoming new Xbox will both deliver more graphics horsepower than today's iPad, but over the course of their lifespans, Apple's rapid, exponential advancement in iPad processing and graphics upgrades will continue as these new consoles remain stuck with the capabilities they arrived with in 2013.

Users appear far more willing to replace their $800 smartphone or upgrade their $500 iPad than to regularly replace a $400 games console for a newer one, particularly given the lack of backward compatibility often associated with new game consoles versus the strong backwards compatibility Apple has fostered on the iOS platform.

In the past 13 years since 2000, Microsoft and Sony have each only introduced two new generations of their game consoles, while Nintendo has launched three. In less than half the time (since 2007) Apple has launched six generations of iPhone and iPod touch and four major generations of iPad. This has allowed Apple to continually and aggressively update the processing power, system RAM and storage capacity of its mobile devices.

Since the iPhone's release in 2007, Apple has sold over 500 million iOS devices, dwarfing the combined installed base of all three of the last generation of dedicated game consoles.

Essentially, rather than building a game console intended to last for five or more years on the market, Apple is building rapidly evolving mobile devices that can function both as mobile gaming devices and as very sophisticated living room game "controllers" for Apple TV, outfitted with cameras, large touchscreen displays, gyroscopic motion sensors, mics, speakers, storage, wireless and mobile network access, advanced processing and video capabilities and other hardware that would be prohibitively expensive to incorporate into a conventional games console controller.

Apple TV, paired to iPhones and iPads via AirPlay, has the potential to render dedicated game consoles obsolete with disruption that mirrors the shift from mainframe computing and dumb terminals to today's distributed PCs with network access.

Apple hasn't yet begun actively pushing the development of Apple TV based, multiplayer games played from iPhones, iPods and iPads. However, once it does, the Pre-Mobile, PC design of dedicated game consoles risks the same cannibalization that conventional desktop PCs have suffered from iPad, and that dedicated portable gaming devices have suffered in the Post PC era of ubiquitous mobile devices capable of playing games from an app market dominated by iOS.

Accelerating that potential disruption is the fact that new generations of dedicated game consoles last hit the market at around $400 to $600, and their manufacturers initially subsidized those prices by as much as an additional $200. The relatively high entry cost of dedicated game consoles is necessitated by the fact that they have to be powerful enough to get gamers' attention and then last on the market for at least 5-6 years. Only toward the end of their lifespan can they be sold at a profit at an ASP of around $200.

In contrast, because people buy smartphones, iPads and iPods to do other tasks, they can offer to also play games for "free," allowing Apple to sell its Apple TV device for just $99, connecting these mobile devices to the TV. Because mobile devices are regularly replaced, the upgrade cycle of the graphics intensive part of the system is short, while the less powerful TV appliance can be sold cheaply and last for several years without needing a replacement, as it just serves as a conduit for putting the graphics of mobile iOS apps on the big screen.

This gives Apple TV a huge advantage in price competition. In the last generation of video game consoles, price played a major role in the initial success of the Xbox 360 over the significantly more expensive PS3. Microsoft's product could be significantly cheaper because it lacked an expensive HD optical disk player (its ill fated HD-DVD drive was sold separately as an option, while Sony included Blu-ray on the PS3) and didn't initially include support for features such as full 1080p HDTV. Both systems have been outsold by the cheaper, simpler Nintendo Wii, which appeared on the market without any support for HDTV resolutions.

In a market where price has historically been more important to consumers than hardware specs and graphics quality, Apple TV and AirPlay gaming via wirelessly connected iPhones and iPads offer a strong challenge to the status quo, even before considering the much more attractive pricing of iOS games over the $50 to $80 titles of conventional game consoles.
«123»