AppleInsider
Posted: June 8, 2013 4:03AM
in General Discussion edited January 2014
Lee Clow, Chairman and Global Director of Apple's go-to ad agency TBWA/Media Arts, recently discussed the 30 years he spent working with Steve Jobs, as well as the history behind now iconic commercials like those from the "Think Different" campaign.

The ten-minute clip, spotted by Business Insider, comes from the PTTOW conference held recently in May and shows Clow giving a short rundown of his history with Jobs and Apple. More importantly, the legendary adman gives an inside look into how Jobs understood branding and used that knowledge to change the consumer electronics landscape.

One interesting tidbit from the speech is Clow's take on how Jobs decided on the name Apple. He notes the many legends surrounding the Cupertino company's name, including a story that claims Jobs settled on the name as he was eating an apple when working on the Apple I with Steve Wozniak in his parent's garage.

Clow believes, however, that the tech guru knew personal computing would be somewhat daunting to the masses, and wanted a company name that would seem non-threatening. Jobs was a student of brands, including Sony, which changed its name from the pedestrian "Tokyo Tsoshiu Kogyo KK" because "Sony" sounded inviting and "sunny." 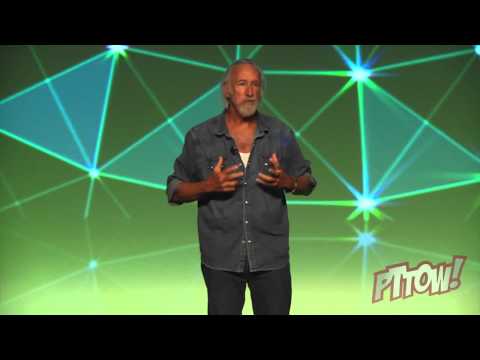 Also touched upon was the famous "Here's to the Crazy Ones" TV spot which Clow said summed up Jobs' values of Apple, as well as his admiration for the people who had vision and tried to change the world. The story has been told before, but Clow offers his own take on the conversation leading up to the ad's airing.

"I tried to convince him to be the voice on that commercial," Clow said, "and he naturally called me the next morning ? after I argued with him way into the night ? and said 'Lee, we gotta go with Richard Dreyfuss,' who was the voice that was actually on it, 'because if people think this is about me and not about Apple, then we'll have blown everything.'"