AppleInsider
Posted: March 16, 2015 2:48AM
in General Discussion edited October 2015
Apple's Campus 2 mega-project continues to progress on its "Spaceship" Ring, where concrete panels are filling out a floor. Tunnels that will connect to parking garages are emerging, the first parking structure is getting its finishing steps before the installation of solar panels.

Apple Campus 2 in March 2015, viewed from the south

In just over a month since we last examined the site's progress in early February, work on Apple Campus 2 has maintained its aggressive schedule. 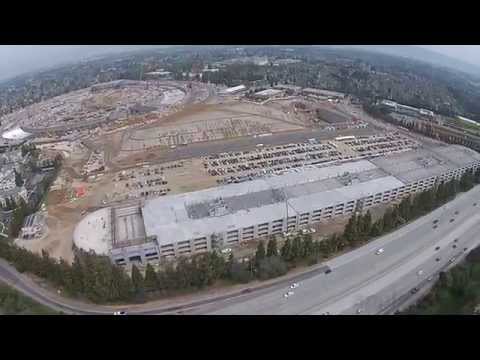 The Ring connects to a tunnel structure that will replace Pruneridge Avenue, which formerly crossed through the site. The new underground roadway will also route vehicles toward two above ground, four story parking structures, the first of which is nearly complete apart from a top decking of solar panels--despite being just bare earth back in September and only beginning to rise in October.

Just north of recently demolished Ridgeview Court 1 site, Apple's underground theater is now taking form, with its circular lobby area now rounding the bend. The north section, which is currently a large excavated hole, will be developed into a theater. Construction permits indicate that the auditorium complex will cost around $161 million to complete.

The theater site will include a 120,000 sq ft "assembly space" with seating for 1,000, kitchen facilities and a large lobby area. In September, the theater excavation was a shallow pit (below), just south of Ridgeview Court 3, which is the last major building within the site that has not yet been demolished.

Expected occupation by the end of next year

Granted final approval just a year and a half ago ago, Apple's Campus 2 project is rapidly moving toward its occupancy goal of 2016.

See previous coverage on AppleInsider of Apple Campus 2 and the current Infinite Loop headquarters, or our other articles on drones. Viewers interested in the DJI Phantom 2 Vision+ can read more about the device or pick one up here.

Note: Readers should be aware that Apple's Campus 2 site is extremely hazardous to photograph using an aerial drone, in part because the site is so large it is nearly impossible to fly over even one quarter of the site within constant visual or radio contact using a consumer drone, and in part because the site is partially within an FAA restricted zone because of the nearby San Jose International Airport. There is constant traffic of low flying aircraft over the site. We strongly encourage inexperienced aerial drone pilots not to attempt to fly in or around the site.
«12»