How to pair your new Apple Watch with your iPhone

AppleInsider
Posted: April 24, 2015 12:57PM
in Apple Watch edited May 2015
Once you get your Apple Watch out of the box, the first thing you'll need to do is pair it with an iPhone to start using its features. AppleInsider offers a closer look at exactly how the pairing process works.

In the video below, we show the pairing of a 42-millimeter stainless steel Apple Watch with milanese loop and an iPhone 6: 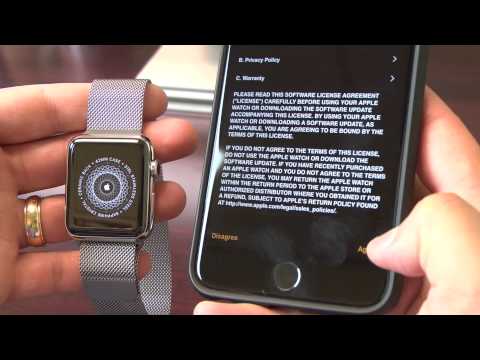 Pairing is accomplished through the official Apple Watch app found in the most recent build of iOS 8. Once the pairing begins, a unique floating particle graphic displays on the Apple Watch, and once captured with the iPhone's camera, the two devices are linked.

Once the Apple Watch and iPhone are paired, a quick setup process requires some basic information, including on which wrist the person plans to wear their watch, and a user's Apple ID login.

Users are also asked to allow the Apple Watch to use both location services and Siri before the process is complete. A passcode can also be created to allow a user to unlock their watch if it is out of range from their iPhone.

Finally, the pairing process asks if users want to install all available third-party applications on the Apple Watch, or if they wish to do it later. A syncing process then takes about five to ten minutes before the device is ready to go.