AppleInsider
Posted: April 24, 2015 11:02PM
in Apple Watch edited April 2015
Apple launched its first wearable with an App Store filled with more than 3,000 third-party titles, a figure expected to grow exponentially in the months ahead. AppleInsider offers a look at some of the first offerings.

Apple's Watch launch is a far cry from that of its iPhone forefather, which hit store shelves without an app ecosystem or official support for third-party software. Drawing from years of internal and external iOS developer support, however, the Apple Watch App Store went live on Friday filled with apps that test the platform's capabilities.

As seen in the video below, a number of big-name companies and developers were first to throw their proverbial hat into the ring. 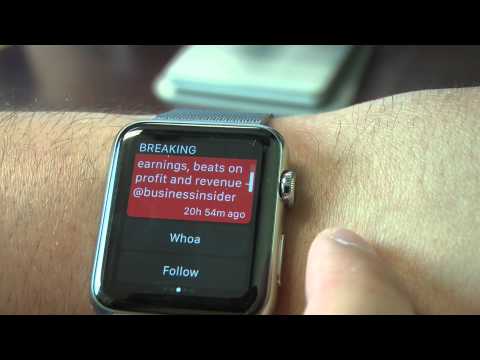 Amazon's offering can be considered a stripped down extension to its full-fledged iOS app. Users are able to search for items using voice dictation, scroll through product descriptions and view star ratings with the Digital Crown. They can also add products to their Amazon.com wish list directly from Watch.

Other apps, like Dark Sky, make good use of Glances. With a simple swipe-up gesture, compatible apps serve up bite-size bits of information for at-a-glance consumption.

Some of the more interesting apps incorporate support for Apple services. For example, the Starbucks app can keep track of payment card balances, find nearby locations and display loyalty points, with transactions completed via QR codes stored in Passbook.