AppleInsider
Posted: August 18, 2015 9:05AM
in General Discussion edited August 2015
The newly announced Fotokite Phi features a unique tethered design that makes it easy to pilot, safe to operate, and especially convenient to travel with. AppleInsider had the opportunity to go hands-on with the new device that aims to bring simple aerial footage to the masses.

Last week, we met with Perspective Robotics founder and CEO Sergei Lupashin in New York City to demo the upcoming Fotokite Phi, which launched its crowdfunding program Tuesday on Indiegogo. Though it seeks funding for launch, the Fotokite Phi (pronounced "phee," as in the golden ratio) isn't a mere concept --?we tested a prototype model that was so easy to control, it flew safely within the confines of a tiny conference room in Manhattan.

Lupashin and his team are working on an iOS application that will pair with the Fotokite Phi over Bluetooth, granting users a live stream from their GoPro and more finely tuned controls while airborne. Native iOS support for the Fotokite is said to be in the works as a stretch goal in their $300,000 Indiegogo campaign, though the use of a GoPro also allows footage to be viewed from the official GoPro app for iPhone and iPad.

The new consumer-focused Phi model is actually based on the high-end Fotokite Pro, which has been most popular with TV news stations looking to get broadcast-quality aerial footage. But while that model costs thousands of dollars and uses professional video equipment for live television feeds, the Fotokite Phi cuts costs, in part, by requiring users to bring their own GoPro camera.

Using the Fotokite is dead simple: To begin flight, hold the tether in one hand and the drone in the other. With a quick flick of the wrist, the Fotokite's engines fire up, and the device can fly in any direction that a user points it in.

Once it takes off, the Fotokite Phi can travel up to 26 feet away, but remains securely connected via a leash. Gyroscopes within the retractable leash holder allow the user to tilt it, moving the drone to new positions while it's in the air. The device always remains tethered, in sight, and within the user's control.

Gyroscopic controls are also expected to be a part of the team's forthcoming iOS app, potentially allowing a second person to control the drone and view footage while the other holds the leash.

With no need for advanced wireless controls, the Fotokite is not only a simple way to capture aerial footage, but Lupashin and his team believe it's less intrusive, too.

Because the leash is always attached, and anyone around can see who is flying it, they've found that people on the ground aren't as creeped out by the Fotokite, as he explained in his TED Talk last year. 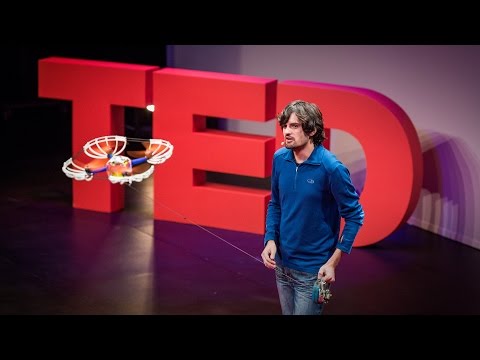 The tethered design has allowed Fotokite to secure special exemptions for flying it near crowds in Switzerland and France. The company said it is currently working with the Federal Aviation Administration for a similar exemption in the U.S.

In our demonstration, we came away most impressed with the ultra-portable design of the Fotokite Phi. The four arms on the quadcopter neatly fold up, allowing the device to fit in a travel-friendly tube.

Considering the size and design of many current drones make them extremely difficult to fit into a suitcase, we think the portability of the Fotokite Phi may be one of its best selling points. It's easy to see how many users would purchase this device to capture quick and easy aerial shots while on vacation, for example.

And though it's tethered to the ground, the Fotokite Phi still moves with the user as they walk around. Lupashin said his team even tested the unit while snowboarding, and found that the Fotokite tagged along just fine, being pulled by the leash as they went down the mountain.

Another feature of the Fotokite that impressed us were inexpensive, easily swappable rechargeable batteries. Lupashin said the battery featured in the prototype was a basic, off-the-shelf unit that costs less than $10, but still provides up to 15 minutes of flight time on a single charge that powers both the drone and the GoPro. It's recharged through a USB port on the quadcopter.

Omitting features like an integrated camera and gimbal allow the Fotokite Phi to not only reduce costs, but also reduce weight. Weighing in at just 12 ounces with a GoPro onboard adds to both its portability and flight time.

In fact, for weight savings, users must attach their goPro without its battery. It connects to a dedicated GoPro port on the Fotokite, and the camera is then powered by the onboard battery.

Lupashin also noted that the leashed design negates the need for GPS, another costly addition which can be unreliable and cause crashes if a signal is disrupted.

Lupashin is clearly passionate about aerial photography --?in our discussion, he mentioned how George R. Lawrence used a camera attached to kites to capture footage of San Francisco after the 1906 earthquake. And he also noted that more recently, drones helped to show the scale of massive crowds protesting fraudulent elections in his home country of Russia.

We went in to our meeting skeptical of the benefits a tether might bring to a quadcopter, but we left impressed. As flying cameras become more prevalent and clutter the skies, it's easy to see how a simple, always-attached camera would appeal to consumers.

The Fotokite Phi is now available for preorder on Indiegogo at a discounted price of $349 for early backers, though there are even greater discounts for the earliest supporters. The company plans to begin shipping units in March of 2016, and the final retail price will be $500.