Apple's keyboard-as-trackpad functionality comes built in to iOS 9 as a feature available to iPad and iPhone 6s owners. Unlike the tablet version, which switches between keyboard and trackpad-like cursor control modes when the OS detects a two-finger drag gesture, iPhone 6s achieves the same result with a single deep press.

Users can invoke iOS 9's trackpad anywhere the keyboard appears, including third-party apps. First, select a text box or text entry window to bring up iOS 9's soft keyboard and onscreen cursor. When in a document or text entry field, firmly press anywhere on the keyboard. Performing the gesture correctly will blank out the keyboard's lettering.

It should be noted that a deep press gesture will not invoke trackpad control after a normal keystroke is logged (when the typewriter-esque confirmation key or special character selection pop-up appears), it must be on first contact. Also keep a document's length in mind, as limited finger space might restrict scrolling or text selection operations. 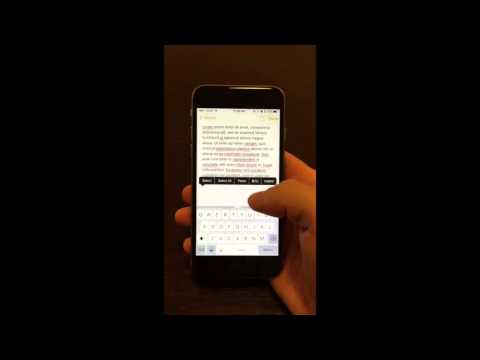 To select text while in trackpad mode, move the cursor over a desired word and press firmly to highlight it. Release pressure and drag up or down to select larger blocks of text. Alternatively, performing two consecutive deep presses without moving your finger expands the selection to an entire sentence, while three presses selects a paragraph. The usual contextual menu with options for cut, copy, paste, font and define is invoked by tapping on the now highlighted text.

On a related note, the same set of selection gestures can be performed directly on bodies of text with a firm press.