AppleInsider
Posted: August 5, 2017 5:45AM
in General Discussion edited January 2021
The Kwikset Premis is a lot of things. It's a HomeKit compatible connected deadbolt with a nice touch number pad with well-lit numerals. It's also a disappointment. We reviewed it for an extended period and found all the wrinkles. 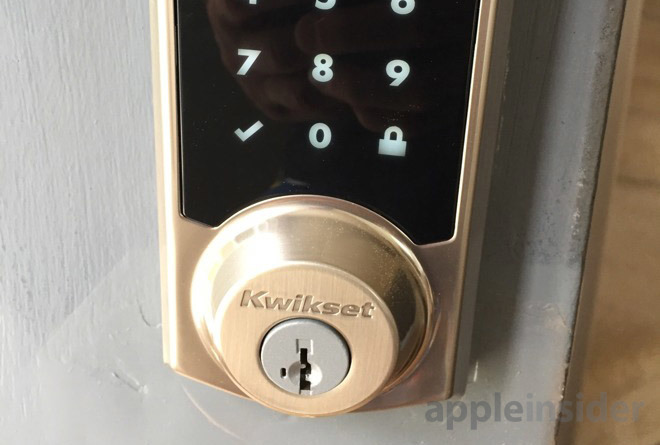 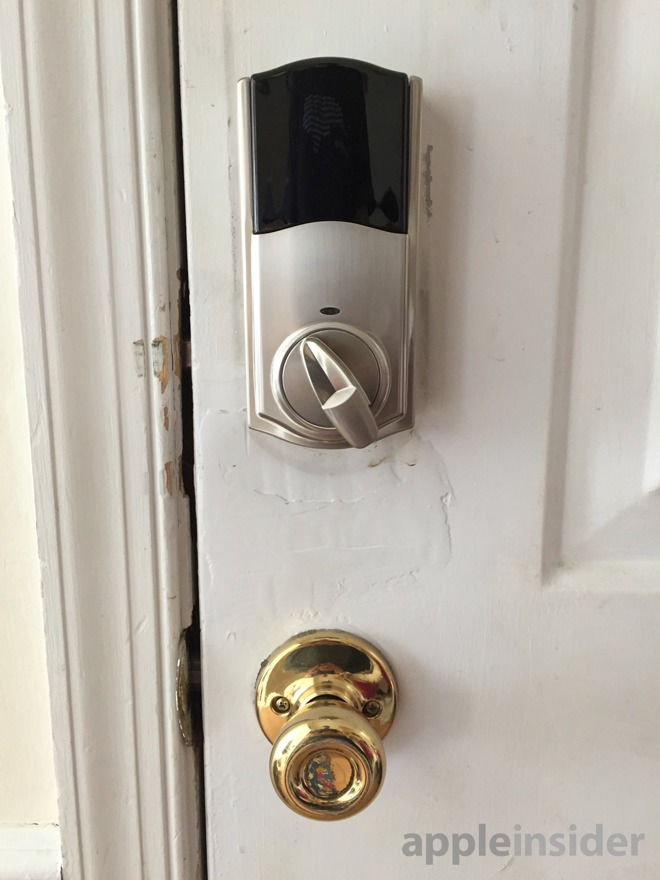 The interior size is much reduced from previous locks, including Kwikset's own Kevo and Kevo2

I tend to dislike YouTube videos for installation because you can't switch back and forth between steps easily, you have to watch the whole video, and on a phone, trying to rewind or skip forward is guesswork at best. The video loads within a web view in the app.

For this installation, I selected the PDF option. The PDF is unsuitable for viewing on an iPhone as it's formatted for desktop, and required pinch zooming and panning to be able to read it at all. That would have been tolerable, except that one of the pages of the PDF refused to load on iOS 10 on my iPhone 6, making installation trickier. The PDF also loaded in a view within the app, rather than having been a part of the app download. 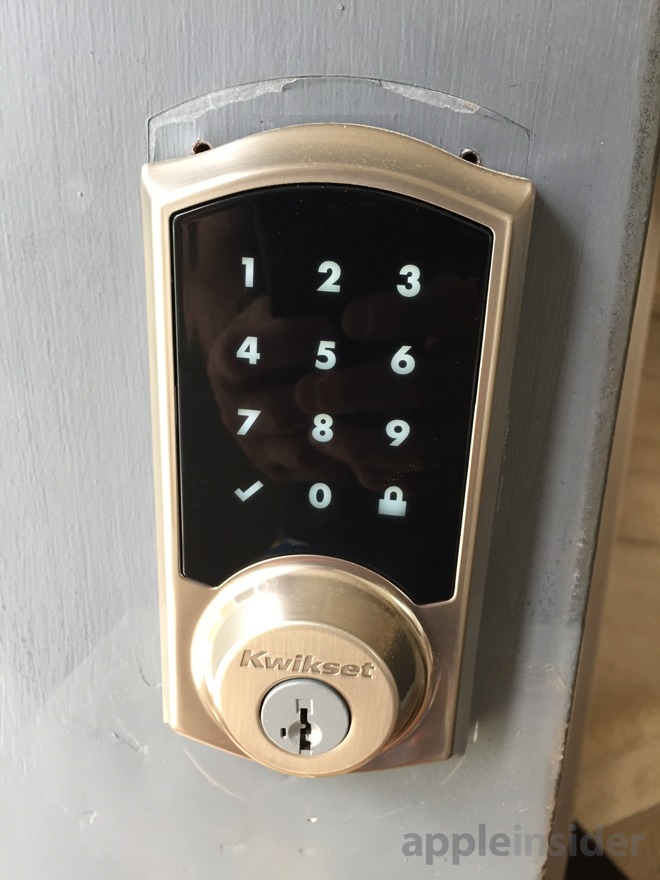 The glossy number pad is bright, and looks nice.

It occurs to me that if Kwikset wants to be able to update the PDF, they can do that just as well by issuing an app update and not having the document be dependent on the strength of the network connection or their server.

The good news was that installing the lock in the door wasn't difficult, and the connection from number pad on the front side of the door to the motor housing on the back side is through a short cable that's protected in a nice woven jacket. The cable isn't as long as ones used by other HomeKit door lock manufacturers, making installing the lock a bit of a juggle to hold everything close to the door while plugging in the connector. 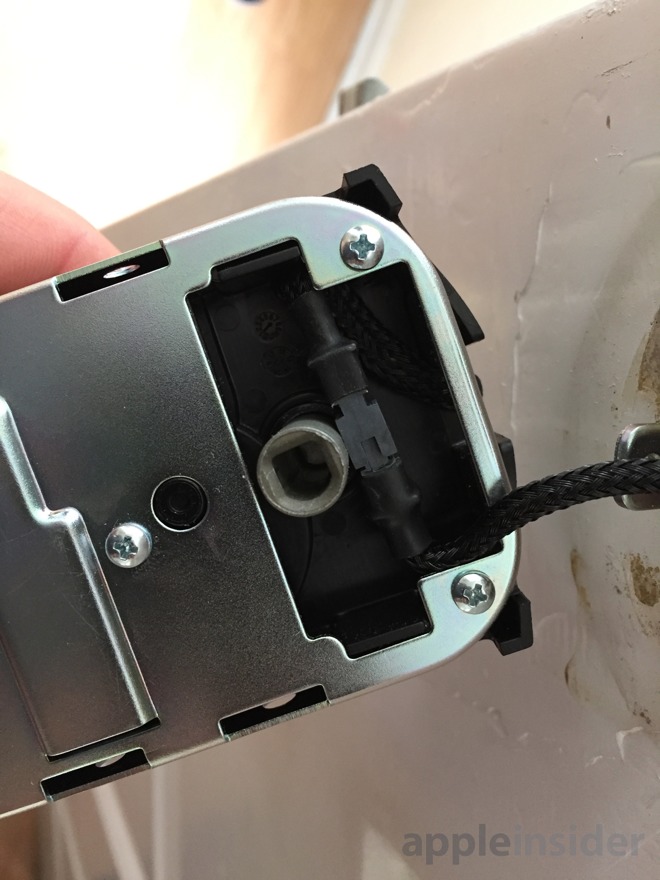 This is the inside of the interior flip lever and braided cable that connects to the exterior number pad.

Kwikset prides themselves on having made the interior motor and flip lever lock housing much smaller than previous electronic locks. They're right to be proud of its diminutive size, and it looks nice on the door interior.

However, the housing cover is held on with three philips screws, one from either side, and one at the 6 o'clock position. It's annoying to screw in the screw at the bottom, because the screwdriver conflicts with the interior door knob that's the correct 5.5 inches between knob and deadbolt. This screw seems to be superfluous. More annoying is that the cover has to be unscrewed in order to change batteries. 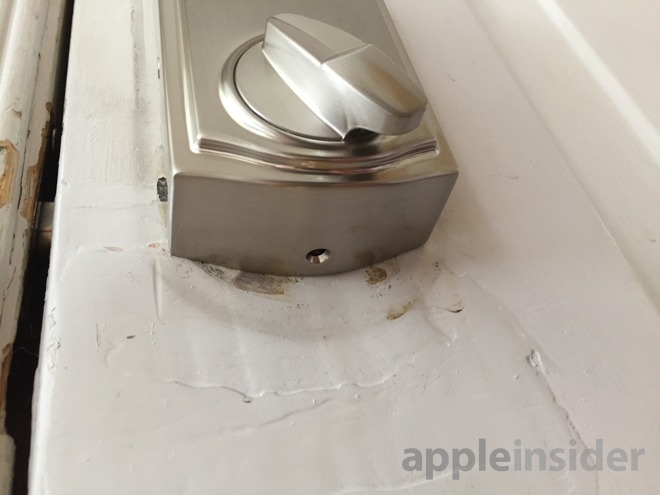 This gets worse, because the Kwikset chews through batteries like a child through Halloween candy. While promising battery changes every six months or so, we got a maximum of a month and a half with active use.

Battery efficiency further dropped after a firmware update to the lock. I changed batteries due to low battery status in the app and beeping from the lock on four separate occasions.

It's an absurdly fast burn rate that led to my removing the lock from the door. In order to make sure that the lock wasn't using excessive battery power to turn the cylinder, I made sure that the cylinder, bolt and door frame were aligned so that there was almost no force required to turn the lever. Installing locks isn't hard, but there's certainly a little room in the hole sawn in the door to wiggle, so it's important to make sure the lock is aligned for least resistance. 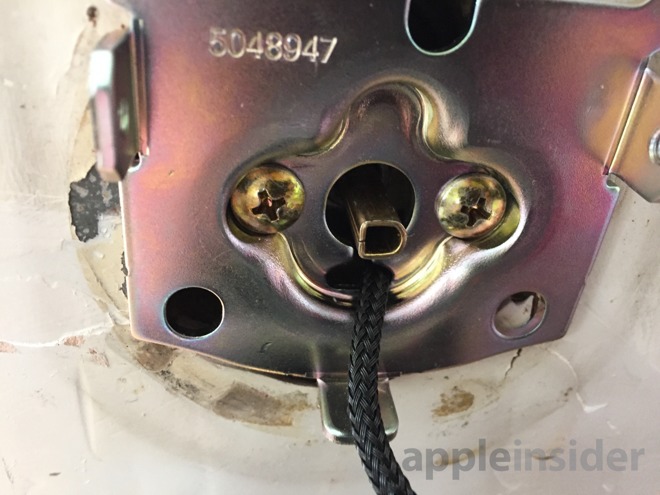 This is the cylinder that moves the bolt, coming from the outside in. The flip lever mates to this. 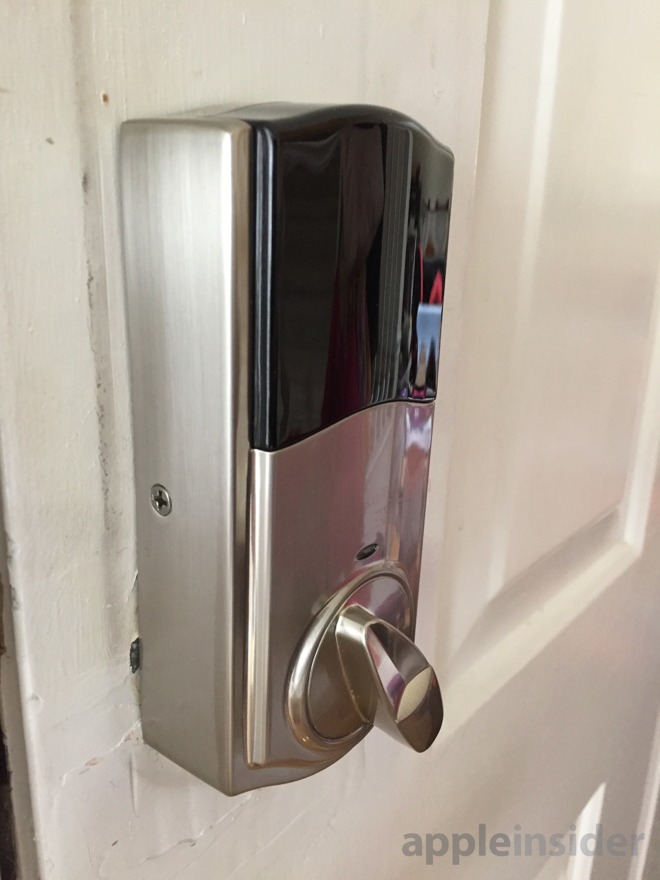 There are two screws from the sides and a third below required to change batteries.

There are some things to like about the Kwikset Premis. It's HomeKit compatible and works very well when being asked to lock and unlock via Siri, as it should. It has a gloss black number panel.

Normally, you'd be right to be concerned about fingerprints indicating where the numbers are for the combination if you unlock via number pad instead of Siri or key.

To overcome this, Kwikset randomly requires two digits to be pressed before entering the combination, which obscures where the fingerprints might reveal a number code. Other manufacturers address this by using a textured matte finish surface that doesn't show fingerprints well. The Kwikset solution to this problem is a nice one. 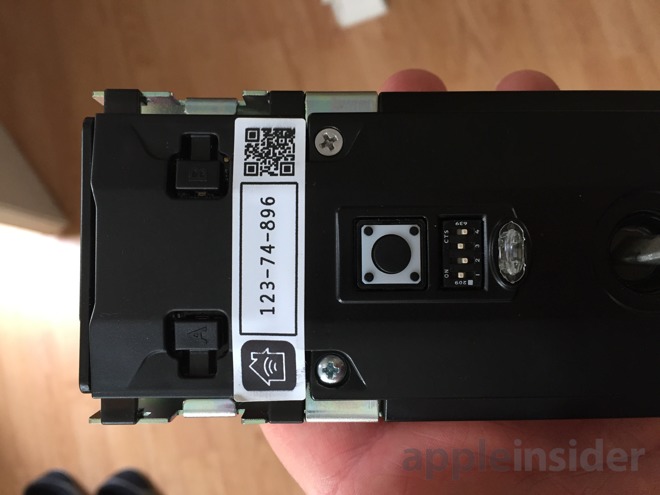 Removing the outer housing cover with three screws reveals a sticker with the HomeKit pairing details.

Ultimately, this lock didn't stay on the door -- the family asked me to remove it and switch to a competing manufacturer that works reliably and doesn't chew through batteries at such a fast rate. The screwdriver required to change batteries was inconvenient. Add to that the initial installation difficulties, and it's hard to recommend Premis to our readers.

The $229 Kwikset Premis is an adequate lock, has HomeKit compatibility, and works reasonably well out of the box. Unfortunately, requiring a screwdriver to change batteries, and using batteries at an alarming rate causes it to be a frustrating experience. That's compounded by the unnecessary location of the screws.

Kwikset does a good job with user management, letting you create user-specific, time-sensitive entry codes without charging you a fee, unlike Kwikset Kevo, which required payment for the creation of virtual keys.

The keypad on the outside for a HomeKit lock is the right decision, as is overcoming the glossy screen security problem with random numbers - or they could just ship a unit without the glossy screen. Putting in numbers that aren't the code, which the lock doesn't respond to immediately is a non-starter when it's raining or hands are full with groceries.

The Kwikset Premis Touchscreen Smart Lock is available in Satin Nickel or Venetian Bronze for $229.00 with free shipping at Amazon.com. Best Buy also has the HomeKit-compatible lock for $229.99 with free store pickup.
«123»