AppleInsider
Posted: January 15, 2018 10:03PM
in Current Mac Hardware edited March 2020
When Steve Jobs showed off the MacBook Air to a collective gasp from the tech industry one decade ago, nobody could yet know its importance as a harbinger of Apple's future. 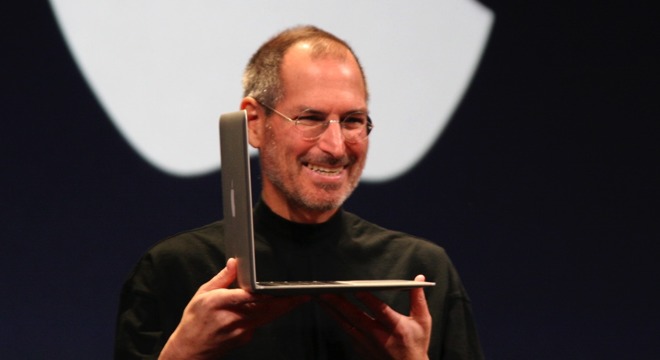 The original, teardrop-shaped MacBook Air was not long for this world. It was expensive, underpowered, prone to overheating, and came with a fiddly flip-down door that hid its meagre selection of ports.

None of that mattered.

The MacBook Air that Steve Jobs slid with his characteristic flourish out of manila envelope was seemingly designed to be as much an object of lust and technical showpiece as it was a shipping product.
Like the now-famous song that came with it, the MacBook Air truly was "a new soul."
Its svelte physique was made possible in part by Apple's innovations in production-scale CNC machining, a practice now widely used but unheard of in consumer products of the day. The bespoke Intel chip whose descendents would later power an avalanche of ultrabooks was, for that moment in time, an unbeatable technological advantage.

Yes, it was Apple's way of saying "shut up about netbooks," but it wouldn't be until the 2010 release of the second-generation Air with better processor options and more ports that the laptop truly came into its own. That first MacBook Air was for something different - it was a coming out party.

It was a bold pronouncement of Apple's mobile-first future.

The company no longer saw people chained to a desk. It saw work (and play!) being done in the living room, on a beanbag, in a park, or in the sky.

To be sure, inklings of that vision were first revealed with the iPhone a year earlier. It took the MacBook Air, though, to fully articulate it.

That vision continues to flourish with the iPad, iCloud, larger iPhones, and the iPad Pro with Apple Pencil.

Today, the MacBook Air survives largely thanks to inertia. It never got a Retina display and has been surpassed as Apple's best thin-and-light option by the 12-inch MacBook and even the 13-inch MacBook Pro. Windows-based Ultrabooks perform acrobatics the Air could never dream of.

That means that when the MacBook Air is inevitably removed from shelves, few will mourn its loss as a product. Some of us, though, will remember it fondly as the standard bearer of a new era.