Video: Apple HomePod vs. Sonos One

AppleInsider
Posted: February 19, 2018 11:20PM
in General Discussion edited February 2018
The smart speaker field is quickly becoming a new battleground for tech companies, with the likes of Amazon and Google going toe-to-toe with Apple. In this video, we take a closer look at how Apple's HomePod with Siri stacks up against the Sonos One with Alexa. 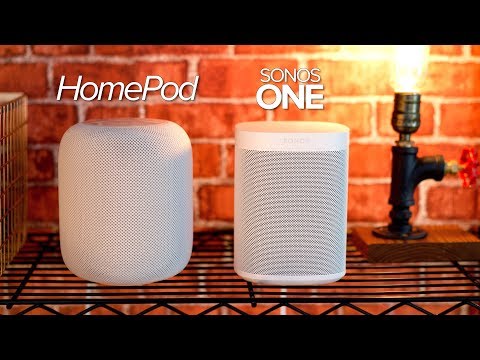 When it comes to selecting a smart speaker for your home, you've got a couple of choices to make.

First off, you should decide what's more important, top notch sound quality or voice assistant functionality. If you chose the latter, and you're looking to save some cash, then you should definitely check out Amazon's Echo and Google's Home smart speakers. If you don't mind dishing out some extra money to add some seriously good sound quality into the mix, then Apple's HomePod and the Sonos One are great choices.

HomePod is mostly limited to the Apple ecosystem, both in terms of setup and streaming audio from Apple Music, iTunes Music purchases, Apple Podcasts, Beats 1 Live Radio or your iCloud Music Library with an iTunes Match subscription. You can stream audio from third-party services over AirPlay, but you have to do so manually. In other words, you can't ask Siri on HomePod to play music from Spotify.

If you're already invested in other services and don't think it's worth making the switch, then the choice is pretty obvious.

When we performed our ultimate smart speaker sound comparison test, we found out that the Sonos One was the only speaker to not support Bluetooth, so we actually had to go into the Sonos app and select Apple Music instead of simply switching the audio output. That said, Sonos plans to bring Google Assistant and Airplay 2 support to its product line in the future.

In comparison to Siri, both Amazon's Alexa and Google Assistant are superior, no questions asked. So why would someone buy Apple's HomePod for $349 if they could get a Sonos One for $200, or for a limited-time, two Sonos One speakers for $349?

Even though the HomePod is limited by Siri, a voice assistant that's undoubtedly lacking, it can be improved and updated over time. Airplay 2 is a good example of Apple's dedication to software, and will fix a lot of the shortcomings that came with the HomePod on release.

The Sonos One's software can be improved as well, but one thing that can't be improved on either device, is the hardware.

The HomePod boasts 7 beamforming tweeters, each of which comes with its own amplifier, transducer and acoustic horn that focuses sound to different areas of the room. For example, some tweeters can take care of the vocals and direct them into the center of the room, while the rest reproduce the high and mid frequency ranges of audio, which are then split between left and right channels and bounced off a wall to create ambient sound.

It also comes with a dedicated subwoofer and custom amplifier, as well as a dedicated low-frequency calibration microphone that constantly listens to the bass and automatically corrects it to ensure clean sound reproduction.

The Sonos One, on the other hand, only has one mid-range woofer and one tweeter, so the woofer has to take care of all of the low to mid-range frequencies at the same time, which can cause the sound to become muffled and blended together. The Sonos also has a tendency to raise and lower output volume when playing at maximum levels -- seemingly to avoid distortion, and it's blatantly obvious.

Both smart speakers come with six far-field microphones, but the HomePod utilizes them for a whole lot more than just listening for your voice. On HomePod, the microphones are responsible for automatically analyzing the acoustics of the room, allowing the device to tune the tweeters to create a room full of sound, while getting rid of any echo. So if you place the HomePod in a corner, it won't waste power blasting audio into the two walls.

Even though the Sonos One's speaker grille goes all the way around the device, upon taking it apart, you'll find that the speakers are directed towards the front, so you don't get true 360-degree audio like on the HomePod.

HomePod is powered by Apple's A8 processor, which comes directly from the iPhone 6. Some consider its inclusion overkill, but that processing power is definitely not wasted. The chip takes care of dynamic processing, real-time buffering, real-time woofer modeling and tuning, upmixing of direct and ambient audio, echo cancellation, beamforming, and of course, Siri processing.

All of that hardware in the HomePod doesn't come cheap. A teardown analysis by TechInsights revealed that Apple's HomePod costs an estimated $216 to manufacture, more than the entire selling price of a Sonos One.

So even though Siri is currently lacking, HomePod has the hardware to stay at the top of its class for many years to come.

Let's talk sound quality. When comparing the HomePod to a single Sonos One, volume at full blast is similar, with our decibel meter showing 88db for the HomePod, and 89db for the Sonos One, at about 7 feet away from the speakers. The extra volume is due to louder highs on the Sonos One. When you add another Sonos One, the duo gets much, much louder than the HomePod, showing a reading of 94db. However, with the volume also comes blaring loud highs that dominate the sound, as well as some distortion that can get pretty annoying, forcing you to lower the volume.

HomePod does a great job of separating instruments and frequencies and balancing them, whereas the Sonos One boasts loud vocals and highs, but the mid to low range of frequencies get blended together. At 50 percent volume, HomePod is very well balanced and the bass is even more pronounced. Even with two Sonos Ones, the bass on the HomePod is louder and deeper.

HomePod has extremely clean and clear vocals, but you get the feeling that they're not loud enough.

The two Sonos Ones produce louder vocals which were missed when we switched back to HomePod. The two Sonos Ones benefitted from true stereo sound which was extremely pleasant to listen to. You'll be able to pair two HomePods with Airplay 2, but it'll cost you twice as much.

In conclusion, if you want the highest level of sound quality with no distortion, go with HomePod. If you prefer highs and vocals that are louder, and don't care that much about distortion, then the Sonos One will do the job for you.

HomePod undoubtedly tops a single Sonos One, but when you can get two Sonos ones for the price of a single HomePod, the combo is definitely worth it. When Sonos One gets updated to support Google Assistant and Airplay 2, it'll be the best choice for flexibility and functionality.

If you're tied into the Apple ecosystem, and really care about sound quality, then go with the HomePod. If you've got the cash to spare and want the best possible sound quality in a smart speaker, then get two HomePods. With all the advanced processing technology built into the HomePod, there's no doubt the tweeters and woofer will maintain their sound quality for many years without degrading over time.

Siri definitely needs some work, but with quality hardware and an A8 chip loaded into HomePod, there's lots of room for software improvements.