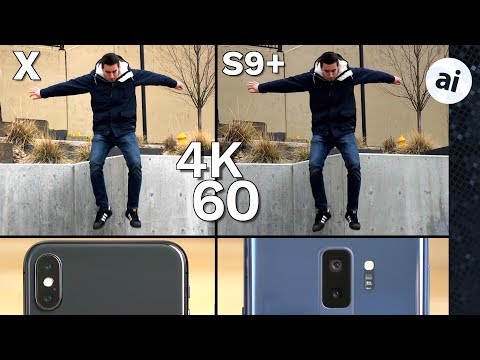 Last year, AppleInsider compared the iPhone X's video recording capabilities against its main rival at the time, the Samsung Galaxy Note 8. In that test, the iPhone X was found to be superior, offering higher quality slow-motion capture, better autofocus, and the ability to shoot 4K-resolution footage at an incredible 60 frames per second.

On paper, the recently launched Galaxy S9 and S9+ seem to have caught up to the iPhone X, but printed specifications often don't translate into real-world performance. Revisiting the topic with Samsung's new flagship devices, we put the Galaxy S9+ to the test to see if the iPhone X still reigns supreme.

Samsung has made both of the S9 devices capable of shooting 4K at 60 frames per second, matching the iPhone X. There is however a catch to this new ability, namely that recording is restricted to five-minute clips.

After recording in this format with back-to-back clips for around 30 minutes, it appeared there were no stability issues with the S9+ at all, other than the heat generated causing them to get extremely hot. While the iPhone X did generate some heat, it didn't get nearly as warm as the S9+, and with no recording time limits at all.

It was also discovered the recording time restriction for the S9+ were not limited to 4K at 60 frames per second, as videos captured in 4K 30, Quad HD, and 1080p 60 modes were also capped at a maximum of 10 minutes.

For heat management and the lack of recording time restrictions, Apple beats Samsung in this test.

When comparing the 4K recordings, there is a noticeable drop in image quality when switching from 30fps to 60fps on the S9+. The video from the S9+ looks a lot better overall at 30 frames per second, and is similar in quality to the iPhone X's 4K 30 recording.

In the 60 frames per second recording, the iPhone X still retains far more detail than the S9 Plus.

Comparing 4K macro detail at 60fps, the minimum focus distance is very similar for both devices, with equal amounts of background blur. However, the iPhone X footage looks a bit sharper, with colors appearing to be more true to life.

Testing the autofocus speed revealed both did a great job. While it was noted the iPhone X slightly overexposed the shot, it still had more detail than the results from the S9+.

In testing the video stabilization of both smartphones recording 4K 60 footage, the S9+ does a far better job than the iPhone X.

The Galaxy S9+'s "Super Slow Motion" feature was tried out in multi-shot mode, but getting the correct timing in auto mode was hit and miss. The resulting video also came out quite dark, and the 720p resolution is also disappointing.

It is also not possible to control which areas of a video are in slow motion after the clip has recorded in this mode. For recording in slow-mo, we would much rather shoot in higher quality 1080p at 240 frames per second, and slow down specific sections in post production.

The darkness was also found when 4K 60 video was slowed down, with the S9+ constantly underexposing the image. The slowed video did look smooth from both devices.

A normal high speed recording at 1080p 240fps slowed down to 30fps at playback showed more detail in the S9+, but again with a slightly dark picture. In comparing the two, the iPhone X's exposure for slow motion footage is much better.

We also noticed a significant crop in Super Slow Motion compared to the 1080p 240 video, with S9+ users needing to be careful when framing the shot in this mode.

The front-facing camera of the S9+ looks better, mainly because it shoots in 1440p resolution instead of the iPhone X's 1080p.

In testing the microphones for selfie video recordings, the iPhone X performs better at reducing background noise, but the S9+ presents a clearer overall sound.

We also had huge problems with Samsung's new High Efficiency video mode while shooting in 4K, regardless of the framerate. All our 4K clips shot in HEVC format were corrupted when we transferred them to our Mac.

Attempts to use WeTransfer, Airmore, and even using a Windows PC all resulted in videos coming out corrupted. The S9+ also wouldn't connect to our Mac while using Android File Transfer and Samsung Switch.

Overall, the Samsung Galaxy S9+ is impressive in gaining 4K 60 video capture, but the quality suffers compared to the 30fps version. The Super Slow Motion feature is pretty cool, but extremely underexposes the image and produces outright terrible quality video.