AppleInsider
Posted: May 30, 2018 7:04PM
in Current Mac Hardware edited May 2018
A video published this weekend shows another iMac Pro repair saga gone wrong, only this time the finger is pointing squarely at Apple, launched by poor design choices surrounding its VESA mount kit.

The video, by Quinn Nelson from Snazzy Labs, dives into a two-week repair saga of an iMac Pro. Apple's VESA mount kit is a user-installable part, necessitating the user remove the factory-standard stand, and replace it with the VESA mount. 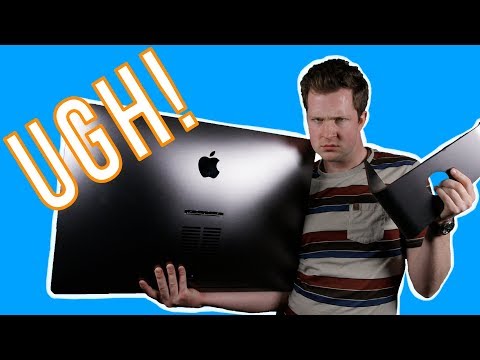 Nelson wanted to get more pictures of his iMac Pro, and decided to reinstall the factory stand. In doing so, he snapped off the last screw in the mount, binding it to the iMac "forever" according to Nelson.

This launched the back-and-forth with Apple, culminating in one stripped screw ultimately leading to an iMac Pro replacement by Apple -- and all of it could have been avoided at several points along the way.

The installer did what he needed to do, and executed well

We believe that Nelson installed the adapter correctly. We also believe that he did absolutely nothing wrong when a screw-head snapped off inside the VESA adapter when he tried to take it off.

Nelson notes that the VESA adapter for the iMac Pro probably isn't designed to be a part that is attached and detached frequently. But, that's not really the point. Apple doesn't say anywhere in the documentation that the user shouldn't be able to take it off at least once without failure after installation, and a better material choice other than the zinc screws would allow for this.

Ask any auto mechanic -- a bolt-head sheared off is a major pain. If a bolt's socket gets destroyed, that's worse. Maybe you can fix it with a thread chaser, but that's not really practical for a computer's screw socket.

Ask the same worker what happens when a stainless steel bolt or mechanical screw is put in a soft socket. It isn't pretty.

Apple, and other manufacturers, cut this risk by picking a material in a screw that is softer and more prone to damage than the socket is when a screw is cross-threaded, or inserted into the screw-hole, improperly.

But, this means that the screw's threads will deform, or the screw head will snap off if there's a problem. This isn't great, but is still way better than the socket getting mangled in the process.

Nelson claims Apple used zinc screws in the iMac Pro VESA mount. AppleInsider has tested one mount, and the screws are non-magnetic -- but not stainless steel. The possibility exists that different production runs of mounts have different screws in the kit, as this very article has comments in the thread demonstrating the magnetic nature of that particular kit.

Regardless, screws are picked to take the damage rather than the socket. They are literally designed to fail before the more expensive part of the assembly does.

Nelson mentions that it would only be pennies more per screw if they used stainless steel, and he's right. But, the same material as used in the casing isn't the right material either, given the risk of damage to the non-user serviceable iMac Pro mounting location during the procedure.

Apple uses similar screws in the MacBook Pro too. In that case, Apple acknowledges the single-use nature of the screws, and mandates a screw kit for technicians when a motherboard replacement is performed.

The supplied screws should have been somewhere in between the zinc that was said to be used, and the stainless steel used in the iMac Pro enclosure. The screw material selection is only a minor part of the problem in this whole saga, though.

Other problems with this situation lie at Apple's feet too

Nelson fessed up with Apple, and called the company and told them what was going on with the stuck screw.

He was told by Apple that the mount adapter is produced by a third-party, and is Apple-branded. Nelson asked for the vendor's contact information for support, and Apple declined to provide information on the manufacturer.

This is a major, major problem.

Nelson was directed to head to the Genius Bar for support for the product. After a two-week saga where Nelson had to actively pursue updates on the repair, he got back a damaged stand, and similar damage on the body of iMac Pro itself.

This is another giant issue, and a failure of customer service on multiple levels by Nelson's Genius Bar. Not only did the lead Genius who performed the repair botch the job, but also allowed the machine to be returned to the user in that state.

Apple blew it from the start

After the video was published, Apple relations caught wind of the issue, and issued a replacement for the iMac Pro. But, it never should have come to that point at all.

The first problem is related to the zinc screws. Zinc in screws by itself are not specifically a problem as there are some engineering and material benefits to them. But, telling the user very specifically in documentation that the VESA mount is not designed to be removed once installed seems, well, mandatory.

And, you'd think that Apple would design and manufacture the mount that supports a computer worth up to $18,000, and not leave it to some unnamed third party.

Next: user support for the VESA mount. It doesn't matter that the stand is manufactured by a third party. It is offered by Apple as an official accessory, and should be supported accordingly.

There is really no excuse for Apple to not offer support on the phone to some extent beyond "go back to the Genius Bar" for an Apple-branded accessory. Don't want to support it? Label it accordingly, and provide information to the user on how to get help if something goes terribly wrong.

Additional problems lie in how the Apple Store handled the problem. Returning a bashed stand and dented computer to a user when it wasn't in that shape when it came in is unacceptable, no matter how you want to look at it.

Apple got a few things right in this situation

Apple Stores only having one or two technicians qualified to work on the iMac Pro isn't the issue, though. While the prevalence of the iMac Pro among users is higher amongst AppleInsider readers, it is profoundly not in the general public.

So, the smaller number of techs trained shouldn't be a surprise, as it is a very small percentage of trouble calls compared to the rest of the demands on any given shop.

Nelson also reports that Apple has reached out and is replacing the iMac Pro in question, which is exactly what should have happened. He's concerned about what happens to a regular consumer, but Apple can and does replace hardware after execution failures at the Apple Store or multiple repairs -- but may be less aggressive about it unless consumers actively pursue the replacement.

Inexcusable, but the reality of scale

Nelson isn't wrong about it costing pennies to use different screws, but those pennies do add up to real money given Apple's scale -- and use of the same screws in other products.

The bigger issue of scale here is in service volume. AppleInsider's continued research on Apple's service numbers is showing a trend of the company's devices improving in reliability, and needing less service per capita than ever before. But, this per capita reduction is far more than offset by sheer volume of devices sold.

As a result, there are an order of magnitude more needs for service than there was a decade ago. Couple that with more venues for users to make issues known, and it can appear that Apple has a service crisis on its hands, when there really is none.

There are going to be cases like this that pop up, and there will be more reports of user-induced catastrophic damage and disagreement with Apple's service policies. Stories of mistreatment at Apple's hands make headlines, as evidenced by this editorial.

It's all part and parcel of the position that Apple holds, and how many users it has now. And, even as repair percentages go down as the hardware gets more reliable overall, it is only going to get louder with time.