AppleInsider
Posted: July 23, 2018 9:39PM
in Current Mac Hardware edited July 2018
The 2018 MacBook Intel Core i9-powered 15-inch Pro refresh strikes some chords with some long requested features, and as often is the case with Apple products, stirs up some controversy.

On the outside, the largest size MacBook remains utterly unchanged, but that's not a bad thing. It's still 17 percent lighter and 14 percent thinner than its 2015 predecessor, and feels as premium as ever.

The unibody aluminum design mates beautifully with the glass display, touchpad, and Touch Bar with touch ID sensor. We've used a wide variety of premium laptops, and while some copycat designs look nice in professional photographs online, nothing else comes close to the MacBook Pro.

The only physical difference you can touch is the updated third generation butterfly switch keyboard. Apple has been forthcoming about how quiet the new keyboard is, and we can positively confirm that.

But, minus conflicting internal documents, Apple still has nothing to say about a silicone gasket sheet attempting to fix the problems plaguing what Apple calls a "small percentage" of MacBook Pro owners.

We're not taking the keys off to show you. But, the crew at iFixit suspects that the quiet keys is a secondary effect of the silicone protection layer added.

Only time will tell how effective this will be, but the still tactile but quieter keyboard is a welcome change. We will continue to collate data regarding failures, and will update you all in six months or so.

Just like with the 2018 13-inch MacBook Pro with Touch Bar, the speakers have been updated. This is an impressive feat since the MacBook Pro already has the best sounding speakers, so we applaud Apple for improving things they really didn't need to.

Finishing off with the exterior, the display now supports Apple's True Tone technology, and retains the P3 color gamut.

The Touch Bar is unchanged and still has the same utility as it did at launch -- but your mileage may vary, as ours does inside AppleInsider.

At the (Intel) Core of the matter

Intel's long awaited 8th generation CPU's are here and Apple chose to include a six-core processor in every model of the 15-inch MacBook with the i7 in the base model, which we've already looked at, and the i9 in this one.

That i9 is remarkably affordable at about a $400 option. With a base clock speed of 2.9GHz and a massive maximum turbo boost speed of 4.8GHz, this chip has great potential for performance.

Testing with Geekbench 4, our i9 MacBook Pro scored a very impressive 5555 points in single core and 24,326 in multi core, coming in 14 percent and 10 percen higher respectively than our 15-inch base i7 model. Putting this into perspective, the best available CPU in the current model 27-inch 5K iMac scores a slightly higher 5736 in single core, but a much lower 19,774 in multi-core.

Unfortunately, this potential isn't fully realized in such a thin and light laptop because of thermal throttling, which has stirred up quite a controversy. 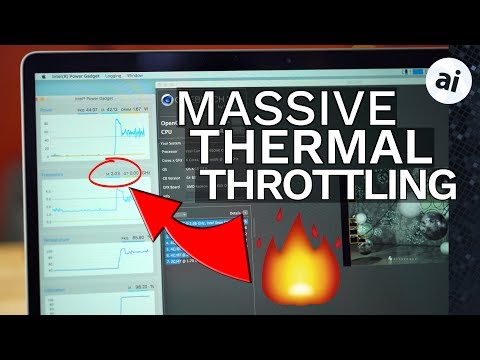 Under Cinebench R15's CPU test, which puts a 100 percent CPU load while running a complex render for a long period of time, our 2018 15-inch i9 MacBook Pro scored an average of around 920 points, where the base model averages 885. That's just a 4 percent performance difference, mostly because the processor is slowing down because of heat.

This isn't a new phenomenon, and it isn't just Apple facing thermodynamics problems with the toasty i9 processor. Dell and Lenovo are catching heat from users regarding the throttling in laptops as well.

Furthermore, All 15-inch MacBook Pros from past generations we have tested going back to 2014 have experienced some amount of slowdown under extended high CPU load applications. This newest generation gets hit the most. More cores, more heat.

But, the thermal condition, and processor throttling isn't a cut-and-dried situation, and greatly depends on workflow and applications used. We'll be taking a much closer look at the performance differences in real life usage, including Final Cut Pro, in our full review.

Yes, we're talking about it again. Thunderbolt 3 is a game-changer. Every port has sufficient bandwidth to drive a dock that supports every possible port you could want, and a high-resolution monitor, in addition to power.

USB-C is here to stay on the MacBook Pro. Two years later, it's time to stop complaining about it. At this point, it is very apparent that Apple is ignoring the complaints about no USB-A.

If you don't want the "dongle life," like we have about always had, get cables for your peripherals. USB-C to whatever you want on the other end is pretty cheap now.

Moving onto other components, The RAM has been updated from 16GB of 2133MHz LPDDR3 to 16GB of 2400MHZ DDR4 soldered onto the motherboard, For an additional $400, you can get 32GB in total. Our model is configured this way, which could be reason enough to upgrade to a 2018 MacBook Pro, again, depending on your workflow.

You already know if you need 32GB of RAM. If you're wondering if you do, you probably don't.

On the graphics side, both the base model Radeon Pro 555X, and top spec Radeon Pro 560X, include 4GB of video memory. In the recent past, we had either integrated graphics or a 2GB dedicated graphics chip which is adequate for light to medium tasks but there were noticeable slowdowns or limitations with heavy tasks, especially if connected to a 5K display.

We opted for 512GB of storage, but Apple now offered up to 4TB of ultra-fast SSD if you can afford it. The $3200 jump in price over the 512GB model gives you massive and fast storage locally, but also a price tag that Apple has only eclipsed in portables a few times before.

A lot of computer for a lot of money

The thermal condition in the MacBook Pro is real. It does impact some workflows, particularly those with high, sustained processor loads.

However, the doom and gloom about the machine being slower than the computer's predecessors is inaccurate, across the board. Unequivocally, despite the heat, the 2018 15-inch MacBook Pro models are faster than the 2017 in every regard -- if not as fast as it could be.

If you've been holding off with your trusty older Retina MacBook Pro, and the low-travel keyboard isn't a problem, we can tell you right now to not wait to buy either the i7 model we first looked at on Friday, or this i9.

This all said, it is not the computer it could be, and there are theoretically steps Apple can take in software. We'll see what comes with Mojave and future system updates.

We'll be putting this $3,500 2018 15-inch MacBook Pro with an intel i9 CPU through its paces in a variety of tasks, including connecting the BlackMagic eGPU kit, for our full review that will be coming in the next few days.

Those looking to purchase a 2018 15-inch MacBook Pro, including models equipped with Intel's Core i9 processor, can save $50 instantly with coupon code APINSIDER at Apple authorized reseller Adorama.

To activate the discount, you must use this shopping link or the pricing links in our 2018 15-inch MacBook Pro Price Guide, and enter the code APINSIDER during checkout. In addition to the coupon savings, Adorama will not collect sales tax on orders shipped outside New York and New Jersey, and shipping is free. Those wanting to finance the purchase can also take advantage of no interest financing when paid in full within 12 months using the Adorama Credit Card.

Need help? Send us a note at [email protected] and we will do our best to assist.
«12»