AppleInsider
Posted: September 11, 2018 4:32PM
in iPhone edited September 2018
The arrival of "Fortnite" in beta on the Samsung Galaxy Note 9 now means there's an Android-based competitor to the iPhone X for mobile gameplay. AppleInsider tries out both versions to see which smartphone you should play the hit game on. 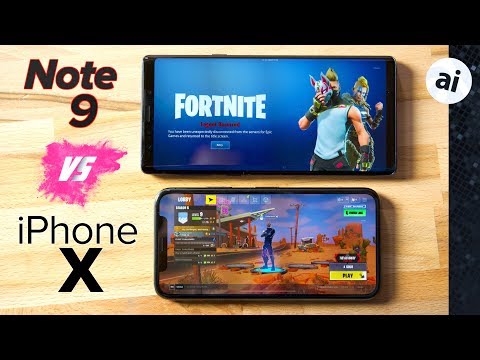 On the inside, the Galaxy Note 9 is packing the same Qualcomm 845 processor that's included in the Galaxy S9. It's an eight-core CPU that consists of four efficiency cores and four performance cores, running at up to 2.8GHz. In comparison, the iPhone X has a six-core processor that contains four efficiency cores and two high-performance cores that can run to a slightly lower maximum speed of 2.39GHz.

The Note 9 has the same Adreno 630 graphics chip as the Galaxy S9 and S9+, which Qualcomm says is 30 percent faster, 30 percent more efficient and has 2.5 times the display throughput than the graphics chip used in the Note 8.

At the Note 9's launch event, Samsung also put a huge emphasis on their new water-carbon cooling system and how it prevents overheating, which in theory would allow the Note 9 to stay cooler for longer.

For testing, "Fortnite" was fully updated on both devices, and to push each device harder, we used each smartphone's screen recording facility at the same time.

Both phones are also charged to maximum battery capacity, with the brightness of the display set to their respective maximums. We also made sure to close all background applications as well.

In the "Fortnite" settings, we've set the quality to High. For some reason, the Epic quality option is greyed out, even after the latest update which fixed iOS performance issues. We're also playing at 30 frames per second.

After jumping into a Battle Royale match, we noticed that gameplay was exceptional, with only one instance of frames dropping, and that was at the time of jumping off the bus. Previously, there would be dropped frames all over the place, causing issues with gameplay and making it difficult to play competitively.

The auto-aim system was found to be annoying after a couple of firefights, with it preventing players from accurately aiming at times.

Even in firefights, we're not seeing any dropped frames at all. This a huge improvement over the previous "Fortnite" update version. We then tested screen recording, and to be completely honest, we didn't notice any hits to gameplay smoothness. This is what we love about iOS 11's screen recording feature, as it barely uses any resources.

After playing for around 25 minutes, our battery life on the iPhone X was at 85%, which isn't too bad since our brightness was set to maximum.

One huge difference is the screen size, which makes "Fortnite" more immersive on the Note 9. There's also no notch to deal with, and the curved edges really help reduce bezels.

We unfortunately didn't get any graphics settings while in the lobby, however while in game, we were able to adjust the settings and set the graphics to high. We chose not to use Epic, since the iPhone X is limited to High graphics.

The Android version seems to be an exact copy of the iOS version. You don't miss out on any features at all.

In-game, the Note 9 seems to be just as smooth as the iPhone X. We did notice a few more dropped frames when jumping off the bus, but other than that, it's perfectly playable.

We also noticed that the UI on the Note 9 is a little bit larger, while still further from the center of the screen. This makes it easier to use, while also making it harder to accidentally tap on buttons like the one for aiming down the sights.

After turning on screen recording, we didn't really notice any performance hits either. There may have been more dropped frames, but relatively few overall.

Before the new update, screen recording made the game absolutely unplayable, with frame rates dropping to around 5 to 8 FPS while in a firefight. Once we stopped recording, it went back to normal.

After the recent update, this issue was fixed, however, we noticed a new issue. When we adjusted volume while recording, there was quite a bit of lag before the adjustment actually happened, in the region of 10 seconds or more.

This was very annoying since I kept trying to make it louder, and 15 seconds later it would be at maximum volume from clicking so many times. After stopping the recording, it all went back to normal.

Gameplay was very smooth, just like on the iPhone X. We observed that the Note 9's display is more saturated, and colors really pop compared to the iPhone X. On top of that, we noticed that the screen is a little bit brighter than the iPhone X as well.

We tried out Epic quality settings, and it definitely looked a bit sharper and more detailed, with little in terms of lost performance either. There may have been a few more dropped frames, but nothing too serious or noticeable.

Hopefully the issues with the iPhone X not allowing you to choose Epic graphics settings will be fixed soon.

After around the same amount of "Fortnite" gameplay, the Note 9 was at 84% battery life, in the same ballpark as the iPhone X.

Both phones did a really great job in terms of performance. Gameplay was very smooth, even while screen recording. They looked basically the same, except the Note 9's increased saturation made it look a bit more pleasing than the iPhone X.

We noticed that the UI was larger on the Note 9, making it a bit easier to play. The larger screen and missing notch definitely helped as well.

The iPhone X, overall, did better than the Note 9 because of the Note 9's issues with adjusting the volume while recording. However, the Epic settings option was greyed out on the iPhone X, while it was available on the Note 9.

Either way, both of these issues should be fixed eventually, so when it comes down to it, both phones are great for playing games.

So if you want to start playing demanding games like "Fortnite", both the iPhone X and the Note 9 are exceptional options for you. Gameplay is incredibly smooth with minimal frame drops, something that you wouldn't expect to see on many other mobile devices.

Shoppers looking to purchase the Samsung Galaxy Note9 or iPhone X can take advantage of special offers at wireless carriers and electronics retailers.

For those that want to purchase the Note 9 outright, Samsung is offering customers a free Duo wireless charger and your choice of a Galaxy Note9 cover. B&H also stocks the phone with free expedited shipping within the contiguous U.S. and no sales tax outside New York and New Jersey*.

Wireless carrier AT&T is also offering a buy one, get one 75% off promotion on the Note 9.

For iPhone X buyers, AT&T Wireless is offering $700 off a second iPhone X with qualifying plans and conditions. The devices are also available on eBay, often at a discount.
«12»