Hands on with the 40mm women's Hermes Apple Watch Series 4

AppleInsider
Posted: October 21, 2018 4:03PM
in Apple Watch
The Edition and ceramic models of Apple Watch are long gone, but if you're looking for the cream of the crop within the Apple Watch lineup, the Hermes models are here for you. AppleInsider goes hands-on with the feminine-skewing 40mm Apple Watch Series 4. 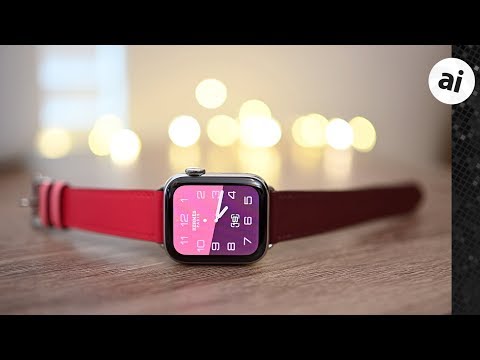 There are quite a few 40mm Hermes Series 4 Apple Watches available, though we opted for the one bundled with the Bordeaux/Rose Extreme/Rose Azalee Swift Leather Single Tour. Unlike the standard Apple Watch, the Hermes editions come only in polished silver stainless steel and with cellular, though you don't have to activate.

To go with the Hermes bands is an exclusive Hermes watch face. There are several variations including multiple typography options, the number of hours around the edge, background colors, and the sole complication in the center. Since we have the rose-tinted version of band, we used the rose-colored face to complete the look.

The band is extremely soft leather and a bit on the thin side. There are a variety of colors, even on our single band. There are small Hermes touches such as their wordmark imprinted on the stainless steel buckle.

Our biggest complaint with the Hermes version of the Apple Watch is only a minor one. Since the original Apple Watch hit the market, the unboxing and ownership experience has continued to dwindle. Instead of being paired with a solid travel/storage box or the round spaceship-esque charging dock, The Hermes just comes in an orange box that isn't too far off any other model. For the price, we wish Apple had opted for a few more differentiating elements.

Those interested in a premium watch experience can purchase Apple Watch Hermes at Apple. Other Series 4 models can be found in our regularly updated Apple Watch Series 4 Price Guide.
«12»