AppleInsider
Posted: November 2, 2018 8:58PM
in iPhone
On Friday at its annual Blizzcon event, Activision Blizzard announced "Diablo Immortal," the first iteration of the Diablo series to come to mobile devices, including the iPhone and iPad.

The plot of the action-RPG is set between Diablo II and III, when the Worldstone has been shattered but Skarn is still collecting the shards needed to revive Diablo, who reigns over the Realm of Terror in the Burning Hells. Footage so far shows the game playing mostly like Diablo III, but with a mobile-optimized interface, and a multiplayer world in which players can meet at public hubs to team up or simply share items.

Blizzard has created six character classes: barbarian, wizard, demon hunter, monk, crusader, and necromancer. There are also new abilities and realms, including some that play on the game's isometric perspective with moving platforms and vertical movement.

Dungeons are instanced like "World of Warcraft," and support up to four people at at time. The company has yet to say whether it might allow player-versus-player combat. 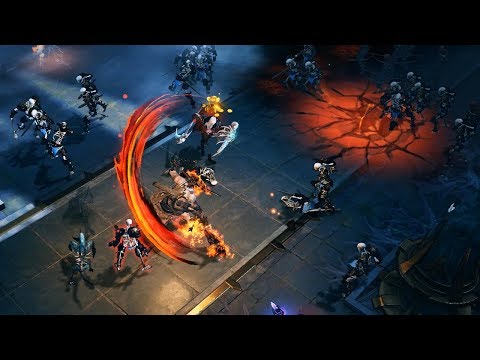