AppleInsider
Posted: November 30, 2018 3:41PM
in General Discussion edited October 2019
A dubious class action lawsuit against Apple accuses the company of misleading customers during its recent Black Friday shopping event by supposedly promoting products not covered by a gift card promotion, but the basis of the suit itself appears to stem from a consumer failing to read the terms and conditions of the sale. 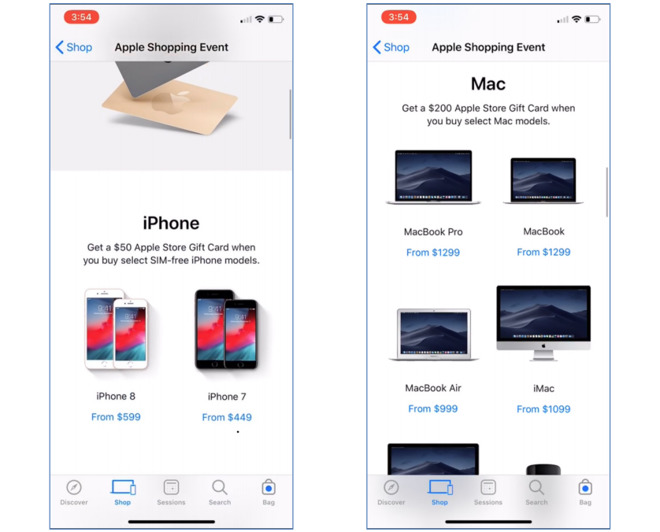 The Apple Shopping Event took place from Black Friday until Cyber Monday, offering gift cards worth between $25 and $200 with the purchase of specific models of iPhone, iPad, and Mac devices. The sale is annual and has featured a similar promotion in previous years, with certain products like new releases or low-cost items not typically included.

According to a lawsuit filed in the United States District Court for the Northern District of California on November 29, Apple "advertised and marketed certain of its products in a manner that falsely and misleadingly led customers to believe that the purchase of such products included the applicable gift card."

By way of proof, screenshots of the Apple Store app show the Apple Shopping Event link at the top of the page, promoting the offer. By clicking that link, consumers are "led to believe" the products featured on that page are part of the shopping event, including the gift card values associated with each item.

After selecting one of the items, the suit asserts Apple further represents the item is included in the offer by adding text at the top of the configuration screen, such as "Get a $200 Apple Store Gift Card when you buy select Mac models today*" when ordering a MacBook Air. Even though the banner at the top of the pages references the sale in general, the woman filing the suit believes it indicated the product being ordered was applicable to receive a gift card.

The suit also claims Apple acted in an "intentionally deceptive manner" for products "for which it had no intention actually to provide gift cards upon purchase," due to the use of the word "select" in its marketing. Apple then "concealed" what the term actually meant in terms of the promotion by "hiding the explanation at the bottom of three separate layers of terms and conditions."

On this final page, Apple includes the full terms and conditions of the sale, including "a few parenthetical statements that cryptically indicate that certain Apple products might have been excluded" from the sale. As some of the products were apparently accessible by the Apple Shopping Event link and were interpreted by the woman as "represented" as being eligible for a gift card, the suit declares "Apple engaged in clearly false, deceptive, and misleading marketing and advertising."

The suit adds the plaintiff, named as California resident Jessica Lee, bought a MacBook Air with Retina display via the link, but did not receive a $200 gift card she expected would be provided with the purchase. The Retina MacBook Air was not included in the gift card offer -- which was spelled out in the terms and conditions of the sale.

The case seeks class action status for all customers in the United States that bought products during the promotion that did not receive the card, as well as a subclass representing all Californian citizens.

While a specific monetary amount for relief is not suggested, the suit does demand damages, prejudgement interest, interest on any economic losses, and an order of restitution. A trial by jury is also demanded.

It is probable that the suit won't be too much of a worry for Apple, as while the accusations suggest the terms are buried in successive links making them harder to see on a mobile device, the terms are ultimately offered to consumers. It is also doubtful that many people would have seen the banner advertising the sale on the configuration pages and immediately assumed it related to the in-progress order for items not covered by the sale.

Additionally, the gift card would have been listed on the final page of the ordering process before clicking buy, making it more apparent that the device in question may or may not qualify for the offer.

It is also reasonable to expect that a consumer tempted by a $200 gift card would query with Apple directly about it being missing, or even return the purchase for a full refund, before resorting to legal action. It is unclear if either route was taken by the plaintiff before the filing was made. Given that it has been seven days after the sale began, Lee is still well within the time limits of Apple's return policy -- which were recently extended for holiday purchases.