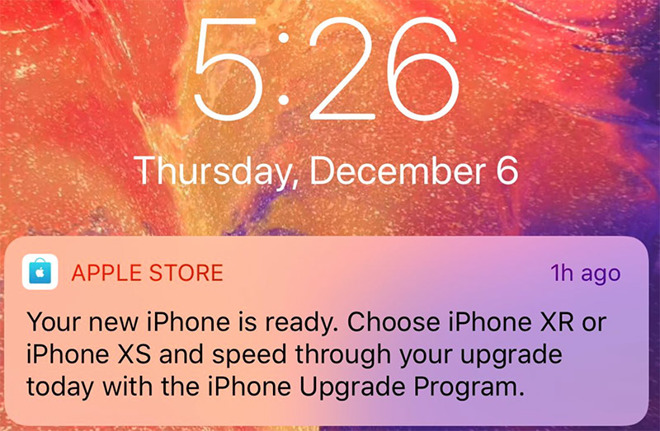 The advertisement showed up this afternoon as a push notification from the Apple Store app for iOS. How Apple generated the recipient list -- and how large that list is -- is unclear, but the promotion specifically targets iPhone Upgrade Program customers.

"Your new iPhone is ready. Choose iPhone XR or iPhone XS and speed through your upgrade today with the iPhone Upgrade Program," the ad reads.

Benign insofar as advertisements are concerned, the blurb is notable for Apple, a company that rarely turns to push notifications in an attempt to goose sales. The text itself is typical of Apple's opt-in mailer, which routinely presents information about upcoming seasonal sales, special promotions and new product releases.

A screenshot of the promotion was posted to Twitter by iOS developer Steve Lederer and later noted by Bloomberg's Mark Gurman.

Apple stock is getting battered on rumors suggesting demand for the latest iPhone models is weaker than anticipated, and today's ad is sure to add fuel to that fire.

Last month, a number of iPhone parts suppliers revised down revenue forecasts, a development market watchers interpreted as a negative for Apple. Some analysts cut iPhone sales predictions for the important holiday quarter based on the supplier reports, but whether the estimates are directly linked to lower-than-usual iPhone demand remains unclear.

On Tuesday, a report citing sources within Apple claimed the company shuffled marketing personnel in October in a bid to boost iPhone sales. Described as a "fire drill," the move was characterized by one person as a "possible admission" that sales were not meeting expectations. AppleInsider sources refuted those claims, saying the changes were a "normal seasonal response to expected consumer trends."

The company attempted to pacify skittish investors last week. In an interview with CNET, Apple VP of marketing Greg Joswiak said iPhone XR sales have topped those of iPhone XS and XS Max every day since its release in October. The iPhone XR, which offers a number of high-end XS features at a lower price point, was expected by many to account for a majority of 2018 model year sales.

On the back of fears of soft iPhone sales, Apple in November kicked off a "limited time" promotion attached to its Give Back trade-in program. The initiative, which is still live, increases the trade-in value of some legacy iPhones by $25 to $100.