AppleInsider
Posted: January 3, 2019 6:17AM
in General Discussion edited January 2019
After issuing an earnings forecast correction on Wednesday, Apple CEO Tim Cook sat down to discuss the anticipated revenue dip and a range of related topics including rising diplomatic tensions between the U.S. and China. 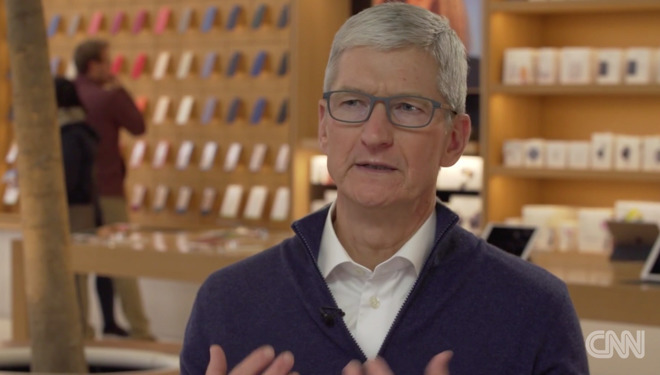 The 13-minute interview with CNBC runs the gamut -- Cook discusses everything from iPhone subsidies to Apple's trade-in program -- but it manages to put the surprise forecast cut into perspective.

On Wednesday, Cook released a note informing investors that revenue for the first quarter of 2019 will be billions of dollars shy of an original estimate from November. Quarterly results won't be released until Jan. 29, but Apple's revised guidance shows some major issues lay ahead for iPhone.

In the interview, Cook reiterated what he said to investors and put the blame for weak iPhone performance squarely on China. Apple's top brass noted a slowdown in the important Chinese economy heading into the second half of 2018, a situation worsened by recent trade disputes with the U.S.

"It's clear the economy began to slow there in the second half. And what I believe to be the case is that trade tensions between the us and China put additional pressure on their economy," Cook said.

On a positive note, Apple services and wearables categories reached new highs during the holiday quarter. Services, which has been Apple's fastest-growing category over the past year, performed especially well over the past three months.

Moving on from the question of iPhone, Cook addressed growing uncertainty surrounding China, particularly his own safety during travel.

Recently, a Huawei executive Meng Wanzhou was taken into custody in Canada at the request of the U.S., leading many to wonder if China would target U.S. execs in retaliation. Cook, however, doesn't seem to share this fear.

"I was just there in October. I'm going back later this quarter. And so it's not something I'm even thinking about is the truth," he said.

The mounting pressure has Apple on the defensive, and the company is apparently trying to mitigate fears both externally and with employees. According to a report from Bloomberg, Cook will be addressing these concerns internally as part of a town hall meeting on Thursday.
«123»