AppleInsider
Posted: January 3, 2019 4:39PM
in AAPL Investors edited January 2019
Since Apple revised its revenue guidance on Wednesday, analysts have been quick to jump on the news with their opinions on the lower-than-expected iPhone sales and reduced revenues primarily from the Chinese market. AppleInsider rounds up a number of the statements made by the commentators. 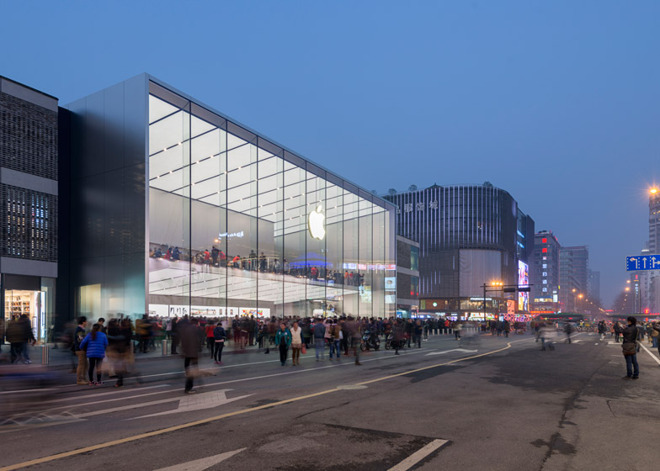 In an unexpected announcement, Apple issued a warning on Wednesday that it was aiming to achieve $84 billion in revenue in its upcoming quarterly results report, down from originally forecast numbers of between $89 billion and $93 billion. In the letter to investors, Apple CEO Tim Cook advised of fewer iPhone upgrades than anticipated, with "foreign exchange headwinds" from a strong U.S. Dollar and "economic weakness in some emerging markets" cited as reasons for the reduction.

One major stretch of text in the letter also blamed the lower-than-anticipated iPhone revenue "primarily in Greater China" as a primary cause of the shortfall. Even so, Cook noted revenue from non-iPhone business grew by almost 19 percent year-on-year, while also highlighting all-time revenue records being set in a number of developed markets.

While Apple is still continuing to produce sky-high revenues, the wobble has prompted a deluge of commentary from analysts giving their opinion on the matter. As to be expected, the pessimism is palpable.

The value of AAPL over the last five days (via Google)

The news is a "major black eye" for the iPhone maker, according to Dan Ives of Wedbush Securities speaking to CNBC, declaring "It's a dark day for Apple and bulls." Chinese demand will be a focus for Apple in the next few quarters, suggests Ives, adding "The degree of softness that we're seeing in China is a bit of a jaw dropper."

While he feels there are many questions that will rise up about what Apple will do in the future, such as if prices will be cut and if this will be a two or three-quarter "massive downtick," Ives believes it will all be down to Cook's decisions. "This, in my opinion, for Cook will be a defining period, how he and the company handle it specifically around metrics and China demand."

The trajectory of Chinese demand in early 2019 may further affect the rest of the year's figures, Rod Hall of Goldman Sachs suggests. It is proposed Apple may have to reduce its projected numbers for the fiscal year further, but at the risk of hitting its share value.

"We have been flagging China demand issues since late September and Apple's guidance cut confirms our view" Hall writes in the note to investors. "We do not expect the situation to get better in March and would remain cautious on the region."

The analyst also compared Apple to the rise and fall of Nokia, noting the nordic phone producer's reliance of replacement upgrades "well beyond what any linear forecast would have implied" in late 2007, raising it as a cautionary tale for Apple's reliance on consumer iPhone upgrades.

The lengthening of smartphone cycles is seen as a major contributor to Apple's woes, according to a Morgan Stanley note, with the "improved smartphone product quality" and longer useful lives joined by a weakening economy in affecting Apple. This and the China result led the firm to cut its price target to $211 from $236, and reduce its FY19 iPhone units target by 20 million to 180.25 million, effectively a 17 percent year-on-year reduction.

On China specifically, the firm's own analysis of shipment data "suggests that for the broader China smartphone market, replacement cycles have lengthened materially in the past two years, and even more so for Apple." A 22 percent rise in smartphone average selling prices in two years and a lack of carrier subsidies also contributed to the China situation.

The relatively high price target of $266 was reduced down to a still respectable $228.

Apple's quarterly revenue and gross margin, including the new estimates for Q1 2019

The release of the guidance "implied China revenue declined 25-30 percent year-on-year," suggests UBS, "declines last seen during the iPhone 6S cycle due at the time to very tough iPhone 6 comps." As a result, the price target is cut from $210 to $180.

While down on Apple's iPhone revenue, UBS does advise there is an "important silver lining" in the form of Apple's Services business, with revenue of $10.8 billion approximately half a billion above UBS' model. It also notes that, despite revenue being down, the gross margin of 38 percent is still within its guide range, albeit at the low end.

The "rapidly deteriorating" business in China and revised outlook for iPhone "materially worse than our below-consensus estimates" has prompted Jeffries to not only cut its price target from $225 to $160, but also to downgrade the stock to "Hold."

"We still think Apple can build a massive Services business over time," adds the company, "but Apple hasn't missed its guide in years, so the extent of this miss suggests it is navigating uncharted waters."

"We move to the sidelines and wait for clarity as uncertainty grows around the hardware business."

Another that has decided to downgrade Apple, this time to "neutral," Macquarie has plunged its price target down from the already-cautious $188 to the extremely low $149. "The bottom line is that we are late (obviously), but we can no longer recommend AAPL," writes the firm in its note.

"Fears about iPhone have been confirmed, uncertainty about the severity and duration of iPhone troubles will linger, and the other shoe is about to drop on Services growth, particularly for its highest margin drivers."

After representing 18 percent of total sales in the last quarter, Citi suggests China's percentage is now closer to 10 to 12 percent. Despite having a financial model below consensus, Citi has lowered it again, downshifting the target price from $200 to $170.

"We do not expect much positive news until after earnings slated for late January and even the focus will be how low can sales go," writes the firm, suggesting a 5 percent year-on-year shrink and a projected 2 percent contraction in March. "We don't expect any rally in the shares in the near term until consensus get materially reset lower and trade wars get resolved."

Cutting the price target from $222 to $187, Piper Jaffray notes it has reduced its full year 2019 and 2020 iPhone units estimates, but at the same time raising estimates for non-iPhone revenue, including Services, Mac, and wearables. "The end result is FY19 and 20 estimated revenue comes down by 6 percent and 4 percent respectively in our model."

The price target cut is said to reflect both lowered earnings per share estimates and a "slightly reduced PT multiple."

Apple's revelation of the revenue decline being caused through weakness in Greater China across iPhone, iPad, and Mac markets leaves Wells Fargo to "question the impact of the US-China trade situation."

Noting the anticipation of "weaker-than-expected iPhone results" since November, the firm's industry checks leads it to believe "demand weakness, coupled with channel inventory burn-off, could persist for a few quarters." Street expectations were thought to be in the low 70 million unit range, but are now down to around 65 million units following the news.