AppleInsider
Posted: January 15, 2019 5:44PM
in General Discussion
Users of the privacy-focused DuckDuckGo will be seeing local search results with Apple Maps integration, the search engine has confirmed, with the integration of MapKit JS being used both for location-based searches as well as the Maps tab. 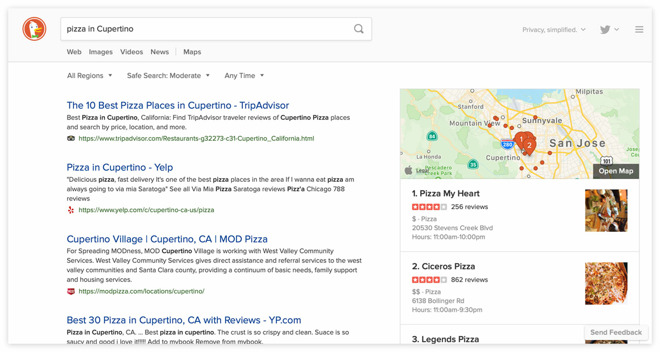 The addition of Apple Maps to DuckDuckGo, which affects both desktop and mobile usage, replaces the previous map-based results that used OpenStreetMap. The change brings DuckDuckGo's map offering closer to what is offered by Google and Microsoft's Bing, but instead is provided through Apple's service.

Described as one of the "first global companies using Apple MapKit JS," DuckDuckGo now offers improved address searches, enhanced satellite imagery, and continually updated maps to its users. When searching for a specific area, a map module will appear showing the location of results which can be expanded for more details.

As is the usual practice for the data-minded search engine, its privacy policy that prevents the collection and sharing of personal information extends to the integration, with no personally identifiable information shared with Apple or third parties. In the case of local searches, in cases where the approximate location of the user is sent by the browser to the search engine, it is discarded immediately after its use. 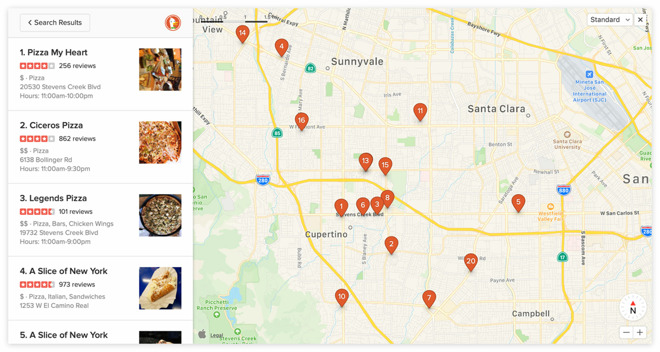 "We're excited to work closely with Apple to set a new standard of trust online, and we hope you'll enjoy this update," writes DuckDuckGo.

Apple announced at WWDC 2018 in June it would be providing access to the MapKit JS framework to embed maps within a website to developers, expanding the existing MapKit to allow it to work within a browser. Technically in beta, there is a free-usage limitation of 250,000 map initializations per key per day that developers must work within, as well as a further limit of 25,000 service requests covering geocoding and searches per day, though developers are able to contact Apple if higher allocations are needed.

It is highly likely that DuckDuckGo contacted Apple about using MapKit JS with a higher allocation, but it is unclear if the access is being paid for, and if so, how much it costs.