A custom screw was the bottleneck in US Mac Pro production

AppleInsider
Posted: January 28, 2019 1:44PM
in Current Mac Hardware edited January 2019
A custom screw easily sourced in China held up the Mac Pro build process in Texas, with the tale highlighting one of the problems Apple faces if it moves iPhone and Mac assembly back to America. 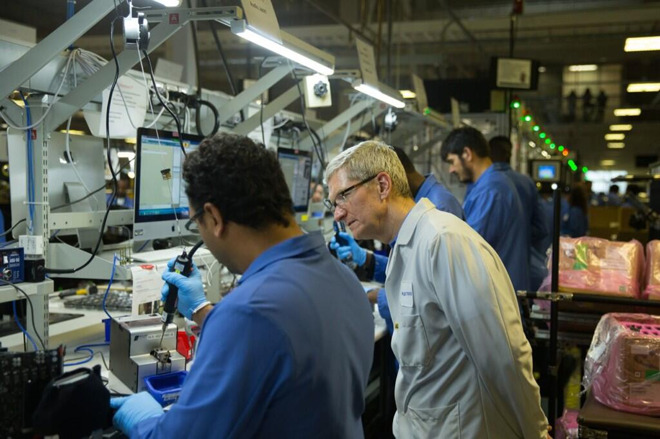 Apple announced a commitment to produce the Mac Pro in the United States in 2012, making it the first Apple product to be manufactured in the country in years. While the declaration was ambitious, production for the model resulted in limited supplies at launch, but ultimately it shipped to consumers bearing the "Made in the USA" engraving instead of the usual "Made in China."

The slow start to production was apparently down to a lack of supply for a specific kind of screw, according to a report by the New York Times.

Speaking to three people who worked on the project, screws for the Mac Pro were hard to source within the United States. Initial tests of production were hampered by a contractor's constrained production levels producing at most 1,000 screws a day in its 20-employee shop.

The team behind the Mac Pro required new parts as the design changed, but while components could be shipped from China, some elements Apple attempted to find closer to home in Texas. In this case, Mac Pro assembly partner Flextronics hired Caldwell Manufacturing of Lockhart to produce 28,000 screws.

While Caldwell was previously capable of producing screws to high capacities, owner and president Stephen Melo had replaced the stamping presses for mass production with versions used for more precise jobs, due to China's ability to mass produce cheaply.

"It's hard to invest for that (Apple-level orders) in the U.S., because that stuff is purchased very cheaply overseas," Melo advised.

In the end, the new machines were used to create the screws, but not the exact versions Apple wanted. It is also noted that the 28,000 screws were delivered to Flextronics across 22 trips, with Melo performing some deliveries in a Lexus sedan.

One former Apple manager noted the relatively small team at Flextronics working on the project compared to the larger teams in China, which overwhelmed overstretched workers. It was unclear why the team was smaller, but it was suggested the higher wages of American workers was behind the decision.

Another citied issue with American production is the lack of 24-hour production, with U.S. workers not working around the clock. By contrast, in China, factories scheduled production for all available hours, with workers woken from their slumber to meet production goals if required.

Case Western Reserve University economics professor Susan Helper noted "China is not just cheap," as it is a country where the presence of an authoritarian government means "you can marshal 100,000 people to work all night for you."

China's factories are also able to find vast numbers of employees in a short space of time, such as Foxconn's recent pledge to hire over 50,000 people across all of its Chinese factories in the first quarter.

Helper suggests it is possible for Apple to increase production in the United States, but it would require a significant investment in time and resources for robotics and hiring specialized engineers, rather than hiring large numbers of low-paid workers. Job training would also need to be improved by the government and industry for it to happen.

Despite calls by the Trump Administration for Apple to bring manufacturing to the United States, Helper warns the chance of it occurring in the current climate is low.
«123»