AppleInsider
Posted: March 12, 2019 1:13AM
in iPhone edited March 2019
Sprint in an open letter to consumers derides AT&T for its "5G Evolution" advertising push, saying accompanying "5G E" connectivity branding -- soon to land on iPhone with iOS 12.2 -- is a gambit designed to mislead consumers. 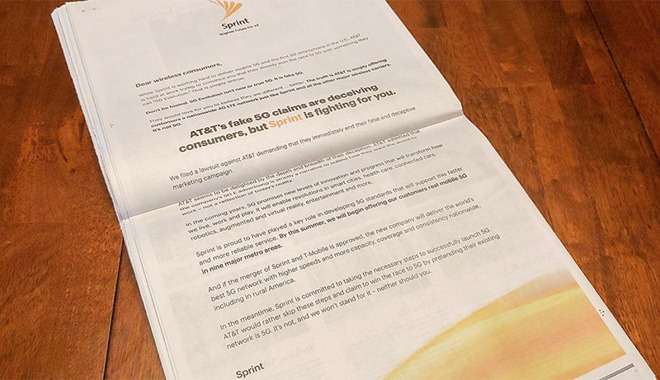 The letter (PDF link), distributed as a full-page ad in The New York Times on Sunday, is the latest effort from rival U.S. cellular carriers attempting to inform consumers of AT&T's controversial marketing scheme.

"While Sprint is working hard to deliver mobile 5G and the first 5G smartphone in the U.S., AT&T is hard at work trying to convince you that they already won the race to 5G with something they call '5G Evolution.' That is simply untrue," the letter reads. "Don't be fooled. 5G Evolution isn't new or true 5G. It is fake 5G."

AT&T in 2018 assigned the 5G Evolution label to a 5G foundation network currently being deployed across the U.S. Built on existing LTE technology, 5G Evolution can hit a theoretical 400Mbps, well below gigabit speeds promised by ratified 5G standards.

In January, AT&T began selling devices that displayed a "5G E" connection icon when connected to upgraded cell towers in 5G Evolution markets. The move drew criticism from competing carriers who argue the designation is a misnomer, including executives from Verizon and Sprint who called the practice "misleading."

"AT&T is not offering its customers 5G but is delighted by the confusion they've caused with their deceptive 5G E' marketing and attempt to convince consumers that they've already won the 5G race," Tovar said. "We're not standing for this kind of deception, and neither should consumers. We already filed a lawsuit in federal court asking that AT&T be stopped, and now we're further exposing AT&T's false claims. Every carrier - every company - should tell consumers the truth and be held accountable for the promises they make."

Sprint goes on to provide statistics from a commissioned survey that found 54 percent of respondents believe "5G E" branding denotes a network with the same or better performance than a standards-based 5G network. Further, 43 percent of consumers mistakenly believe AT&T phones can connect to a 5G network, the survey said.

Apple's iPhone and iPad products, which have so far gone untouched by AT&T's branding, will soon display 5G E iconography with the release of iOS 12.2. The graphical assets first popped up in beta versions of the mobile operating system in February.

Sunday's open letter follows similar outcries and publicly issued condemnations from industry competitors, all of which are investing heavily in their own respective transitions to 5G. Sprint, for example, plans introduce "real mobile 5G" in nine major metropolitan areas this summer.
«12»