AppleInsider
Posted: March 14, 2019 7:06PM
in General Discussion
As we wait for Apple to announce its new streaming video service, AppleInsider takes a look back to when it was the company's QuickTime software that brought "Star Wars" to the web audience -- and forever changed how we watched video online. 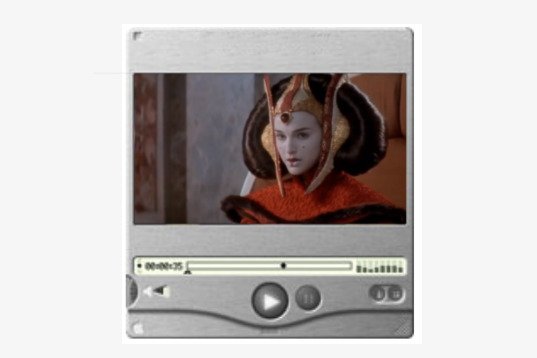 Reconstruction of how we watched "Star Wars: Episode I: The Phantom Menace" back in 1999

Apple is late to the Netflix style of streaming video, but the way it got here is responsible for how we all watch anything on our devices. More than twenty years before it launches its new TV service, Apple changed what we could watch on our computers and how we could watch it.

This is hard to remember now, and very easy to dismiss as hype when so many other firms have worked on video since. Yet before Apple developed QuickTime, video simply was not working on computers. There was RealNetworks' Real Player and Microsoft had its Media Player, but neither were more than examples of technology and pretty poor ones at that.

Microsoft was then a slave to its list of features and if it were possible to play any video on Windows, that was enough. Windows plays video, check it off the list. That you wouldn't watch it didn't matter, not to Microsoft.

It did to Apple. And Microsoft knew competition when it saw it, so moved to block QuickTime and even tried to force Apple to drop the whole project.

The case further suggested that Microsoft threatened to stop developing Microsoft Office for Mac unless Apple agreed to cease work on QuickTime. According to testimony in that same trial, Tevanian reported that there had been an April 1997 meeting in which Microsoft proposed that Apple leave playback to them.

Tevanian's written testimony reports that one of Apple's QuickTime team, Peter Hoddie, tried to clarify. "Are you really asking us to kill playback?" he is reported to have asked Microsoft. "Do you want us to knife the baby?"

And a Microsoft business development manager, Christopher Phillips, confirmed it. "Yes, we're talking about knifing the baby," he replied.

Regardless, Apple continued developing the QuickTime software, and in 1999 they found a way to get everyone's attention with it. Lucasfilm had released a trailer for the then forthcoming "Star Wars: Episode I: The Phantom Menace" and nobody liked it at first stream on computers. Audiences were thrilled in theaters, but on PCs and Macs, this barely-audible postage-stamp-sized video was not going to change the world.

However, Apple engineers contacted Lucasfilm and persuaded them to produce "Trailer B" for QuickTime instead, and that did change everything. 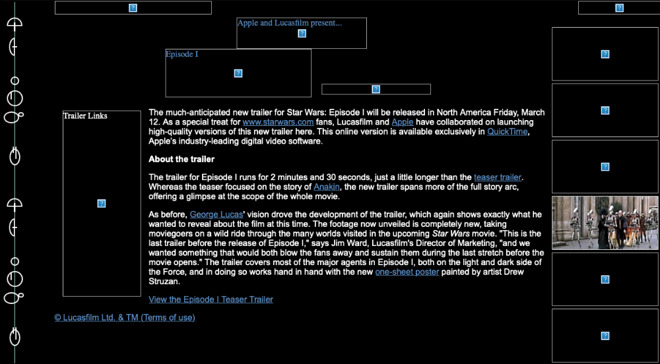 All that survives of Apple's 1999 web page about "Star Wars" and QuickTime. (Source: The Way Back Machine)

This is probably where you went to get "Trailer B" back in 1999. You were probably on a dial-up connection using a 56kbaud modem, if you were lucky, and you had to download both the trailer and the QuickTime software to play it in.

Compared to today, this is video in its infancy. But, it was so much better than anything else -- and "Star Wars" was so much anticipated -- that it was downloaded 3.5 million times in the first five days. Steve Jobs called it the biggest download in history. 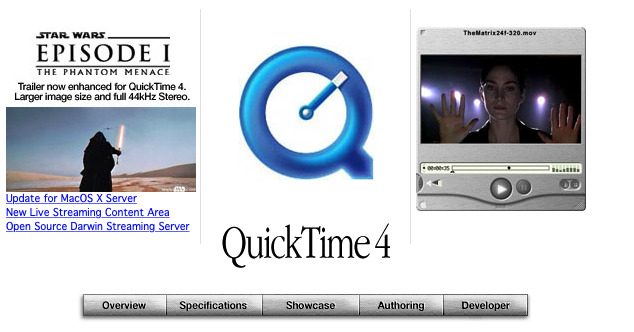 The trailer was originally made available in several different file and screen sizes, but the biggest at the time was 480 x 216 pixels and that came in at around 25MB.

Today there are a thousand GIFs a day on Twitter that are bigger than this, but in 1999, that file size and this many people downloading it was a severe problem. While only Apple and LucasFilm's "Star Wars" site were officially where you could download it, in practice many fan sites hosted it as well. Sites hosting this video could be hit with so much traffic that they would collapse under the demand.

Except, there was a firm called Akamai that was developing a system called FreeFlow which was intended to solve the problem. It was a system of routing and optimizing web traffic specifically to ease the loads on any one site at any one time.

Akamai is still in business as a content delivery network, but it just does not get the respect it should. Back in 1999, Wired described Akamai's FreeFlow as being so important to the web that it was comparable to "the invention of Arabic numerals, or the development of seafaring."

The world has moved on since QuickTime 3 made a splash with "The Phantom Menace," but even as you know that video is now so good that many have abandoned television sets, it's hard to appreciate the progress.

Until you see this -- as a direct result of how that "Star Wars" trailer went viral twenty years ago, Apple is still the first site many films get their trailers shown. That includes each new "Star Wars" film.

That's a still from a trailer to "Solo: A Star Wars Story" and as originally grabbed, it was 1920 x 816 pixels. You've missed the original "The Phantom Menace" trailer frame that's shown to the same scale at bottom right. There's even more to this, though.

As well as the screen size -- "The Phantom Menace" frame into the "Solo" one another 15 times -- there is also the sheer image quality improvement. And the audio is unrecognizably better.

The internet's ability to shunt large amounts of data around at unimaginably faster speeds than dial-up could dream of is a factor in how much video we watch, but it isn't solely responsible for the quality.

That "Solo" trailer, roughly the same duration as "The Phantom Menace" one was, comes in at 151MB.

Just 20 years ago, video was a joke. We had computers struggling to show even postage-stamp-sized video at a few frames per second and never with very many of those seconds duration.

We were supposed to be impressed then with what our devices could do but now we're not. We don't think about it once. We just completely accept that one minute we can in writing in a Word document and then next we're watching a movie on Netflix.

You don't tend to hear the word QuickTime mentioned much today, but you are a lot more likely to hear of .mp4. That video standard was originally just Apple's file format with a few extras. Even today QuickTime's .mov is similar enough to .mp4 that you can often just rename a file's extension to make an MPEG-4 player play Apple's format.

Speaking of formats, though, Apple has now adopted H.264 for QuickTime and its video services on the Mac are being handled by a new generation of software called AVFoundation.

Yet the real difference between then and now is less in the specific video codecs being used and more in the sheer volume of data. That "Solo" trailer may only be six times bigger than "The Phantom Menace" one, but it's not the only trailer online. Every film has its trailer online in that quality -- and now every film is online in its entirety too.

Plus movies and TV are being downloaded rather more than 3.5 million times per five days. Just a bit more. YouTube has revealed that people were watching one billion hours of video on its service every single day -- and that was back in 2017. 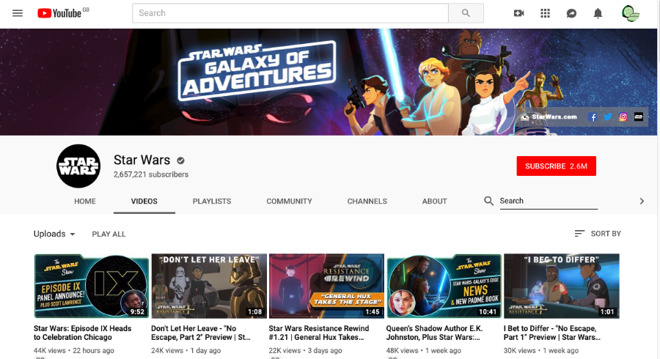 The official "Star Wars" channel on YouTube has hundreds of videos - though not, curiously, the famous Trailer B for "The Phantom Menace"

There's no way to estimate how much data that actually is since YouTube offers videos in multiple qualities and you've seen how the same screen size can offer you anything from ropey low-res 1980s VHS video rips to present-day HD or even 4K footage.

For an example, we took a video of a theater performance that was shot on an iPhone in HD. Cut down to the same 2'44" duration as "The Phantom Menace" trailer, the file size is 309 MB. That's over 12 times as much data for the same running time -- and that's just in HD.

The maths get very approximate now, but since 4K is four times the picture quality of HD, you would expect our present-day theater video to come in at 1.2 GB if it were in 4K.

There are not going to be 3.5 million people watching Apple's video streaming service, at least not at launch. Analysts currently predict that Apple will have 100 million video subscribers by 2024 and that this will earn the company $10 billion annually by then.

Maybe this is what Microsoft foresaw back in the '90s as being a clear and present danger, but the QuickTime baby that they wanted killed has grown up.