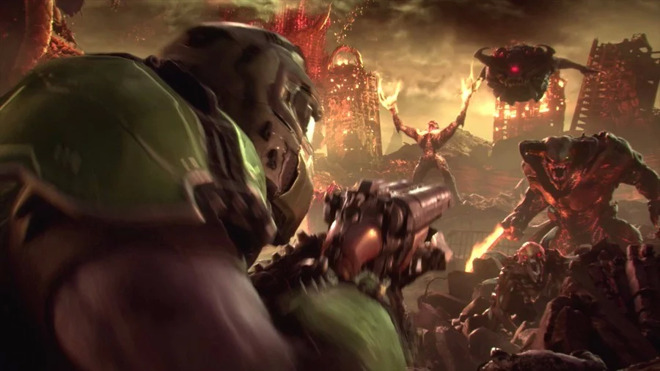 id's "Doom Eternal," one of the first Stadia games.

Players will experience minimal input lag, and load into titles within seconds through links on sites like Twitter, YouTube, and the Stadia Store, Google said. Gamers will even be able to shuttle between platforms within moments, for example jumping from a phone to a Chromebook to a TV-connected Chromecast Ultra.

While people will be able to use existing gamepads and other controllers, Google is also planning to ship the Stadia Controller, an Xbox-style gamepad with dedicated sharing and Google Assistant buttons. The accessory will connect directly to the server running a game via Wi-Fi and detect when a person switches devices.

At launch, Stadia will support graphics up to 4K resolution at 60 frames per second, sharing to YouTube in the same quality. Long-term the goal is 8K resolution and 120fps or higher, at least on the player's end.

Each Stadia server instance is expected to have far more power than an Xbox One X or PlayStation 4 Pro, thanks in part to a custom AMD graphics chip that appears to be equivalent to a AMD Vega 56. Google is moreover partnering with the creators of middleware platforms like Unity, Havok, and Unreal, the idea being that Stadia can be treated as its own development platform with cross-platform support.

Google is pitching Stadia as an ideal multiplayer environment, since each player connects directly to Google servers, and there are fewer limits on shared experiences -- the company used examples like destructible environments and battle royales with thousands rather than hundreds of players. It should also make local "couch" multiplayer easier to implement, and Google is promising to let people watching YouTube streams participate through "Crowd Play," simply queuing up behind others wanting to join if a streamer allows it.

Indicating the seriousness of the platform is the creation of Stadia Games and Entertainment, Google's first in-house game studio, led by veteran developer Jade Raymond.

The Stadia service should launch sometime in 2019 in the U.S., Canada, and "most" of Europe, including the U.K. It's unknown how or how much gamers will have to pay for access.
«12»