AppleInsider
Posted: April 7, 2019 1:42PM
in iPod + iTunes + AppleTV edited April 2019
Netflix has elaborated on the "technical reasons" why it has disabled AirPlay, and claims that since it can't tell what device the stream is being sent to because of changes in the protocol, it won't allow the feature. 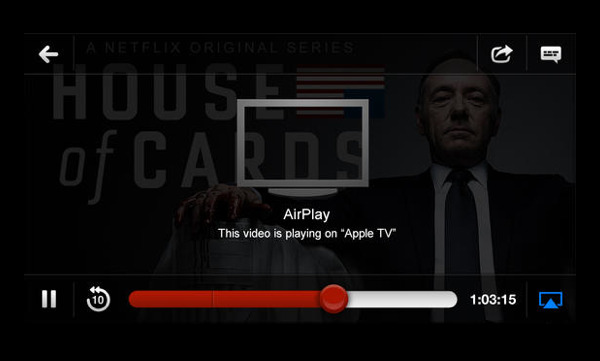 In a statement to AppleInsider and other venues, Netflix is blaming the removal of the feature on Apple, and it allowing AirPlay on third-party televisions.

We want to make sure our members have a great Netflix experience on any device they use. With AirPlay support rolling out to third-party devices, there isn't a way for us to distinguish between devices -- what is an Apple TV versus what isn't -- or certify these experiences.

Therefore, we have decided to discontinue Netflix AirPlay support to ensure our standard of quality for viewing is being met. Members can continue to access Netflix on the built-in app across Apple TV and other devices.

At present, it isn't clear what Netflix gains by knowing what television is being used, other than data harvesting. It also isn't clear what the company being unable to "certify these experiences" means, from a technical standpoint.

Netflix has made it clear that apps on iOS and Apple TV are unaffected for native playback on the device that they are installed on. However, going forward, users won't be able to use AirPlay to stream the content to another device.

The change in app policy was spotted on Friday in an update to the official Netflix Help Center webpage, which now instructs iOS device users to connect to a TV using Chromecast functionality in the television, Netflix 2nd Screen, or a physical cable. Customers attempting to stream video content to an Apple TV or AirPlay-compatible device are now met with an error message.

Netflix's AirPlay withdrawal hit just two days after Vizio launched a beta version of its SmartCast 3 software with support for both AirPlay 2 and HomeKit.