AppleInsider
Posted: May 17, 2019 8:43PM
in iPhone edited May 2019
In the next few weeks Spotify will begin a U.S. test of its first hardware, an auto accessory offering hands-free music control. 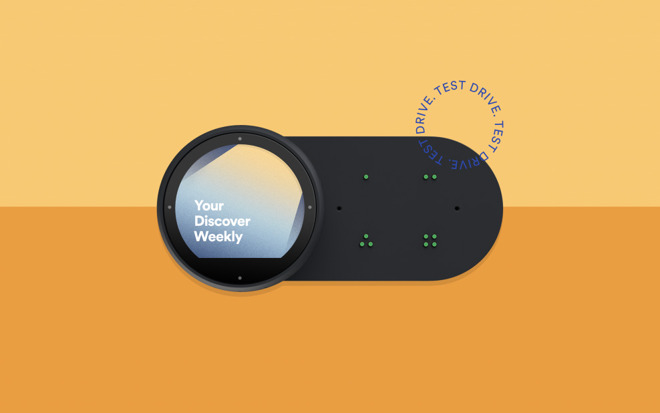 Dubbed the Car Thing, the device is powered by a 12-volt outlet and links to both a smartphone and car over Bluetooth. A small circular screen shows what's playing, while buttons offer access to preset playlists.

By saying, "Hey Spotify," people can make Siri- or Alexa-style requests, such as "play 'A Flaming Ordeal' by Raison d'etre" or "shuffle my 'Bedtime for Bonzo' playlist."

Spotify is only reaching out to a select group of people for testing, and the company says it's interested primarily in gauging in-car music and podcast habits. Spotify is concentrating on being "the world's number one audio platform -- not on creating hardware," it wrote in a blog post.

An anonymous source for the The Verge backed this statement, saying there are no intentions to launch the Car Thing as-is, or even to the general public. Nevertheless the company has trademarked "Car Thing," "Voice Thing" and "Home Thing," laying the groundwork for potential commercial products.

Hardware like the Car Thing could get around a key limitation on iPhone, which is Apple's control over voice commands. While people can ask Siri to play songs if they have an Apple Music subscription, they can't do the same if they have Spotify Premium or any other on-demand third-party service.