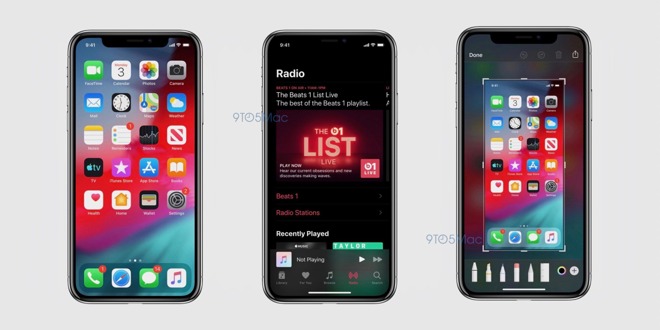 Switching on Dark Mode makes docks and tab bars darker, and switches some app backgrounds from white to black, the shots indicate. A representative example is Music, shown with an all-black background on the Radio tab.

The option can reportedly be enabled through the Settings app or Control Center. Dark Mode has been a long-standing request from iOS users, initially to reduce eyestrain at night, or just for aesthetic purposes. Since the launch of the iPhone X the feature has taken on more significance, since OLED screens can save power and boost contrast by shutting off all-black pixels.

The screenshots were shared by an unspecified leak source for 9to5Mac.

An image of the new Reminders app on the iPad depicts a large sidebar, and separate inboxes for items marked "Today," "Scheduled," and "Flagged." It's also easier to add and search for lists. 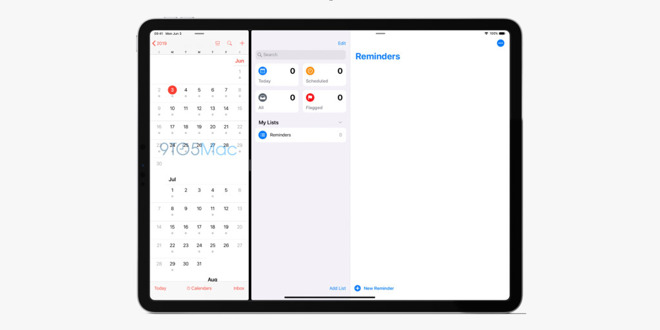 Also revealed in the latest leak is that Apple's merger of Find My Friends and Find My iPhone is tentatively named "Find My." On iPads a map fills the screen, with just a small corner window containing tabs for switching between friend and device lists. Though no screenshot was shared beyond an icon, the map is said to look identical to Apple Maps for macOS with Mojave's Dark Mode turned on.

iOS 13 should launch this fall, but premiere at next week's Worldwide Developers Conference in San Jose alongside the next major versions of macOS, tvOS, and watchOS. Other iOS 13 upgrades should include new health features, and updates to Screen Time, iMessage, and Apple Books.