AppleInsider
Posted: June 7, 2019 3:58PM
in General Discussion edited December 2019
You're either a Siri Shortcuts fan, in which case the new features will absolutely delight you, or you've never looked at it. In which case, Apple wants to help you find out how useful Siri Shortcuts are for you. 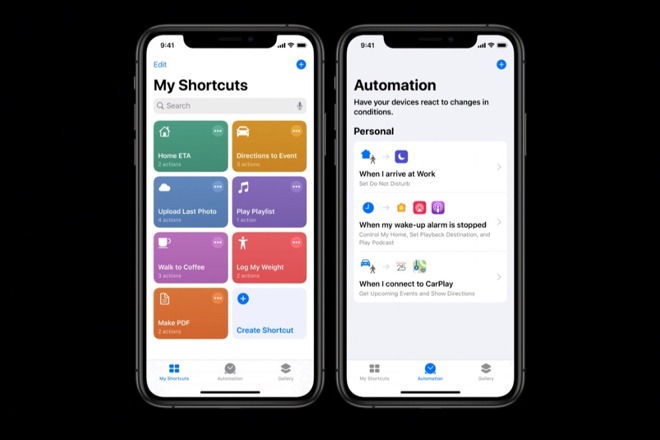 One of the most memorable highlights of WWDC 2019 is something that wasn't even mentioned on stage in the keynote. Siri Shortcuts is going to have several significant changes for iOS 13 and the first is that Apple is bringing this superb automation tool to more people. Siri Shortcuts will be installed by default on every iOS 13 and iPadOS device.

Siri Shortcuts already lets you automate repetitive things you do on your iPhone or iPad. If you are always converting large photos into thumbnails to post on Twitter, Siri Shortcuts can turn many steps into one, for instance.

If you often text a partner to say you're on your way home, Siri Shortcuts could just send them a text. However, you can also have it figure out where you are now, check the traffic conditions, and automatically send that text message with a precise ETA. 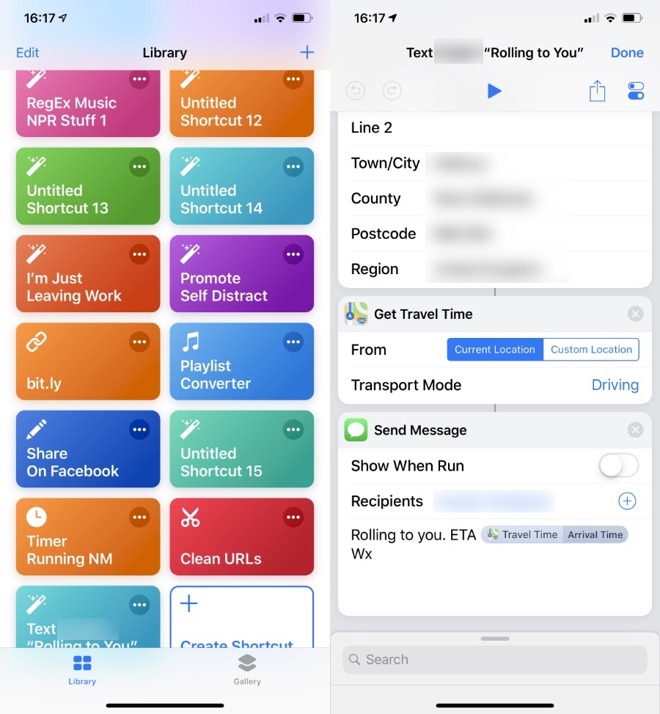 Left: a tiny selection of our ever-growing number of Shortcuts. Right: how you build one up.

And you can set up Siri Shortcuts so that all this happens just when you say "Hey, Siri, heading home now" or any phrase you want. This isn't Siri interpreting what you said and parsing the sounds to get meaning it can act on, it's Siri comparing what you say now to a list of what you've said you want to start shortcuts with.

It's an amazing thing to have on your iPhone and iPad, and the odds are that you've either amassed hundreds of shortcuts -- or you've never even looked into it.

That's because despite make more fuss about Siri Shortcuts last year than it did this, Apple actually did not make all of it part of iOS 12. We got Siri suggestions offering to create shortcuts based on what we do, but that was half brilliant and half aggravating. You'd send one email to one person and Siri would be offering to make you a shortcut to do that again, but you'd email the same person twenty times and it wouldn't.

With iOS 13 and iPadOS, at least some of that is over. Now everyone will have Siri Shortcuts installed on their iPhones and iPads and there's no need to download anything else.

That's good for them as Siri Shortcuts is exceptionally useful, but it's also good for all of us who are already into this. As more people use Siri Shortcuts, so Apple will keep developing it further.

Apple is doing just fine at the moment with developing Siri Shortcuts. One advantage of it not having been part of iOS 12 was that we didn't have to wait for operating system updates, we could and did get periodic and sometimes very significant updates to Siri Shortcuts itself. 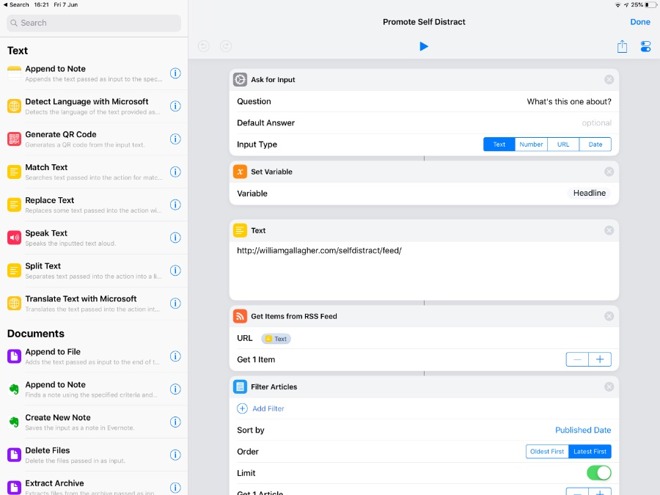 Nonetheless, the updates that are coming with iOS 13 are the biggest that Siri Shortcuts has had and they are these coffee-spilling improvements that will delight every existing user.

Up to now, you have had to positively choose to run a shortcut. Maybe you told Siri, maybe you tapped on a widget or an icon, or maybe you opened up the whole Siri Shortcuts app and hunted through that very long gallery view. Whatever it was, you had to set it running.

From iOS 13, you will be able to have shortcuts run themselves automatically. For example, we've got one shortcut that we need to run around 11am each day to retrieve certain information. At the moment, we have OmniFocus pop up to tell us it's time, then we run the shortcut.

With the smallest of changes, we're going to able to rewrite that shortcut so that it launches itself at 11am. We can do that rewrite in the current beta version of iOS 13, but in our experience Siri Shortcuts is not the most stable part of the system. And as it is a beta, we're sticking with iOS 12 for our production machines. 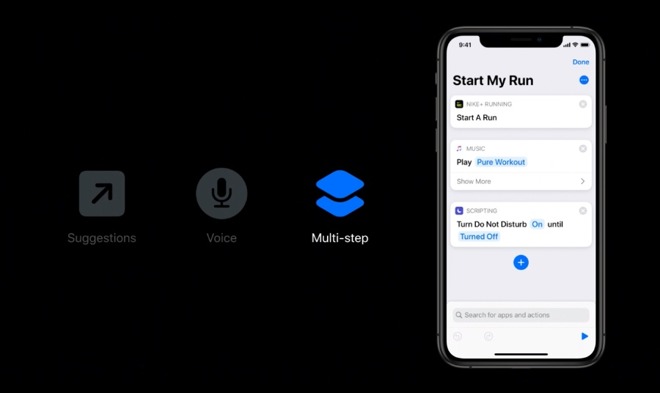 From an Apple developer video, this is showing the many different ways you can call a shortcut

Nonetheless, when we can move over to iOS 13 for everything, this is one of the reasons we will run to it.

Just being able to set a specific time for a shortcut to run itself is useful, but that's far from all. In a very similar way to how the Home app does automation, you can also tell a Siri Shortcut to run at sunset or when you arrive home.

A shortcut can now be triggered when switch Airplane Mode on or off, when you connect or disconnect to CarPlay. Or when you launch a particular app.

Say you always seem to get phone calls the moment you start to watch something on Netflix. Tell Siri Shortcuts that when you launch Netflix, you want Do Not Disturb to be switched on and that's what will happen.

Siri Shortcuts, and its predecessor, the third-party Workflow app, have also always had a limitation that is now being addressed. It's easy to launch a shortcut with your voice, but thereafter if the shortcut needs you to make a choice, you have to tap a button or pick from a menu.

Now there are what Apple is calling a conversational shortcut. We'll need to see just how effective it is as we continue to test iOS 13 and iPadOS, but the aim is that your shortcut will be more interactive.

And speaking of speaking, there are third-party audio apps such as Spotify and the many different podcast players. This is being promoted as a general feature instead of a Siri Shortcuts one, but iOS 13 will be there is the way that Siri could now control these other apps.

The makers of these other apps will now have more tools courtesy of Apple's improved SiriKit, but this is going to help Shortcuts too. You'll be able to automate HomePod, for instance, and have it automatically start playing when you arrive home. 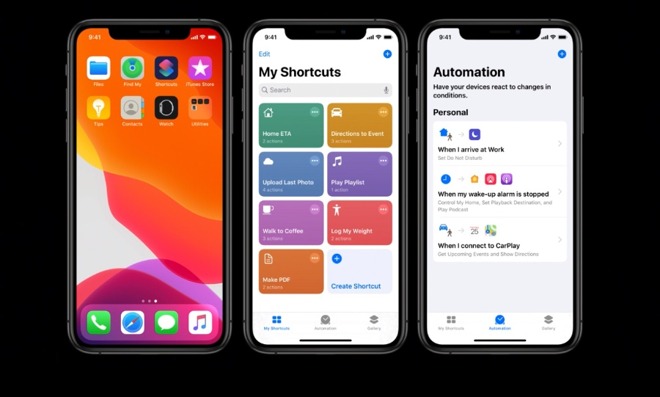 Left: Siri Shortcuts is now included in iOS 13 rather than being a separate download. Middle: the newly redesigned gallery of your shortcuts. Right: the new Automation tab

There is one more thing. If you tell it to, a Siri Shortcut will now truly run in the background.

In iOS 12, regardless of whatever you're working on when you start the shortcut, when you launch a shortcut you are switched over to the Siri Shortcuts app while it runs.

Not only does this interrupt your other work, but it also just looks ugly. If you've ever been put off programming, seeing Siri Shortcuts slowly go through many steps is not going to entice you into learning how to do it.

And when you are a programmer or you've become very familiar with Siri Shortcuts, then what you see on screen makes this feel like a workaround. Rather than an inherent part of the iPhone or iPad, it feels like fragile trickery.

Whereas from iOS 13 and iPadOS, that's gone. Our 11am Siri Shortcut will just run at 11am and we won't notice until it emails us some details at the end.

That Netflix trick with Do Not Disturb won't make a big show of swapping to Siri Shortcuts and then back to Netflix, it'll just do it.

You will still get a notification saying "Running your shortcut," but you won't be interrupted and you won't have to watch the thing going.

We'd have liked to see Apple talk about this at the 2019 WWDC keynote because Siri Shortcuts has always felt a little vulnerable. It's not for everyone, so unless enough people use it, Apple's going to have less cause to keep it around.

Still, including it as a regular part of iOS 13 and iPadOS is going to help raise the profile of Siri Shortcuts. And we are going to have such a good time rewriting our existing ones or creating entirely new shortcuts to take advantage of the improvements too.