AppleInsider
Posted: July 31, 2019 11:55PM
in General Discussion
More than two months after Apple TV Channels debuted on iOS and tvOS, Apple's over-the-top streaming subscription hub on Wednesday welcomed its 20th provider into the fold with the addition of CBS All Access. 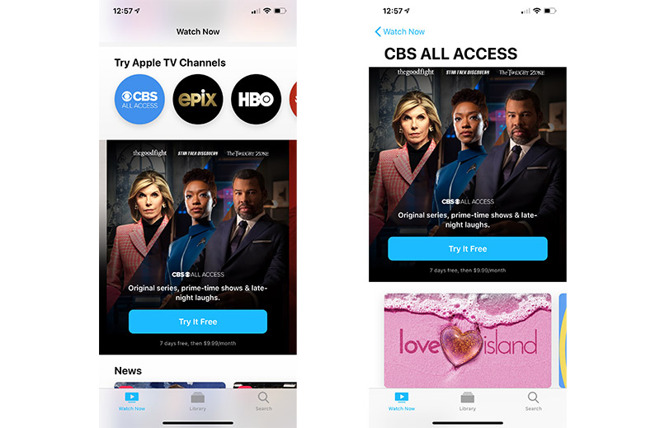 Highlighted in the new TV app under the "Try Apple TV Channels" section, CBS All Access offers customers streaming and offline access to original television series, popular late-night programming and more for a recurring fee of $9.99 a month.

As with other content providers, CBS provides users a limited time free trial that currently runs seven days. After the trial period expires, users who do not cancel the subscription are automatically billed the $9.99 fee through Apple.

Apple namechecked CBS All Access alongside a handful of major network and cable providers in announcing Apple TV Channels at a special event in March, but the service failed to see integration with iOS 12.3.

Apple TV Channels is Apple's answer to a comprehensive streaming experience. Instead of requiring users to subscribe to and watch content in dedicated third-party apps, the TV app can now process payments from participating vendors and play back shows hosted on Apple's servers. The end result is a streamlined experience that feels more integrated than previous versions of the content hub.