AppleInsider
Posted: August 20, 2019 12:44PM
in General Discussion edited November 2019
Apple's 'Project Titan' self-driving car could include course-correction systems to assist with bad weather or road conditions, while sliding doors could have extra sensors to ensure they adapt to open as widely as possible, despite the presence of obstacles. 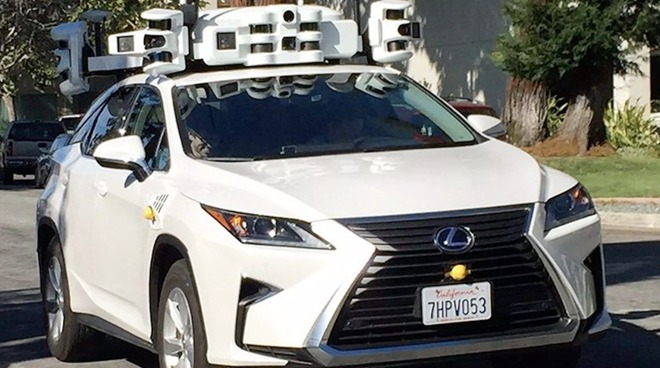 'Project Titan' is the name given to Apple's long-term automotive efforts, which originally started with the design of its own Apple car but in later years moved towards self-driving systems. While the ultimate goal of Project Titan remains uncertain, Apple is continuing to develop ideas in both vehicle design and automated transit which could appear in a future car, van, or truck.

A patent granted by the US Patent and Trademark Office on Tuesday for a "Vehicle stability control system" aims to tackle the issue of unsafe road conditions. Wind and rain, as well as gravel or mud on a road surface instead of tarmac, and even uneven terrain when going off-road, can affect how a vehicle accelerates, brakes, and steers around corners, both for self-driving vehicles and manually-controlled craft.

Apple acknowledges the existence of electronic stability control systems, which determine the steering direction by measuring the steering wheel angle, estimate the vehicle's intended course based on lateral acceleration, yaw, and road wheel speeds, as well as if the vehicle is stable. In the case of lost stability, such systems can apply braking to individual wheels or request propulsion torque, depending on the situation. 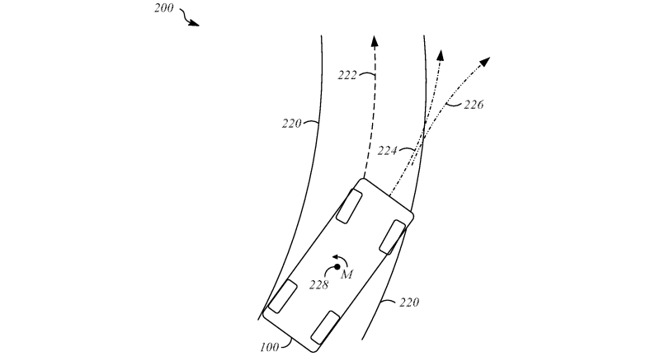 In Apple's version, the vehicle has an internal reference model that determines states for an expected vehicle response. States can be determined by measuring sensors around the vehicle, with a "stability determining module" identifying reference deviations between the measured state and the model.

Commands to reduce the deviations are then sent to actuators to change the speed of individual wheels.

The same stability control system could also feed data to the vehicle motion control system to optimally brake wheels based on a desired turn or motion. Throughout the turn, the stability module can keep monitoring for deviations form the planned commands, and compensate accordingly.

A second patent for "Doors with adaptive positioning" suggests how sliding doors could be added to a vehicle. In Apple's example, it uses two doors on sliders, with one moving towards the front of the vehicle while the other conventionally moves to the back, leaving a wide opening without a central door pillar obstructing access.

In Apple's vision for the doors, the rolling hinges closest to the front and back of the vehicle can be shifted between states, angled so the doors line up with the rest of the car body when closed, or pointed outward for the doors to slide open.

In particular for this system, the tree guide rails used for each door also include a sensor system to determine the door's motion, to help prevent it from coming into contact with items like other vehicles or pedestrians. The sensors feed the door system with data, which is then used to control the actuator that determines the angle the door protrudes away from the vehicle. 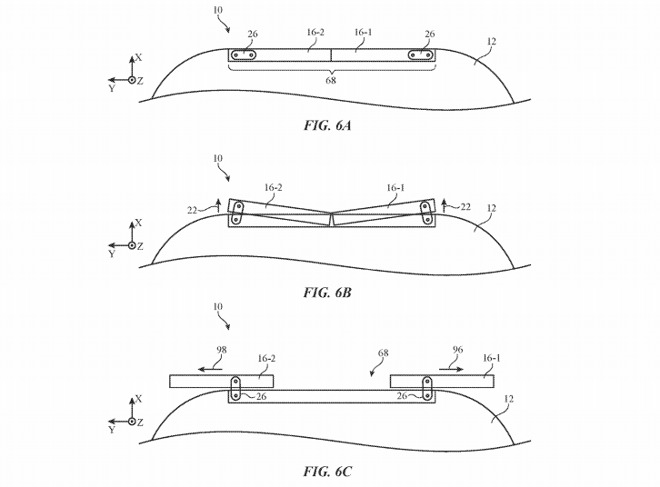 This is especially handy for the front-side doors, as they may not open fully with a conventional rails system due to the wheels potentially being at an angle and blocking the path. By using the actuators to angle the doors, they can avoid contacting the wheels in such situations.

Apple files numerous patent applications on a weekly basis, but while the publication by a USPTO indicates areas of interest for the company's research and development efforts, it does not necessarily guarantee the concepts will make it into a future product or service.

Apple has previously made filings in areas related to both door design and transit safety. For the former, wide-opening doors have been considered, in both sliding and hinged configurations, and without the central door pillar getting in the way.

For stability control, two April filings revealed skid recover systems that used sensors below the vehicle to monitor the ground in relation to the intended vehicle motion. For self-driving cars, Apple has also looked into "confidence algorithms" that can help a vehicle process from sensors using just-enough data, saving resources for other areas.

Apple has filed many other patents in the driving and vehicle design fields, ranging from a remote driver taking control of a self-driving vehicle's systems to safely get an injured driver to a hospital, to the design of retractable bumpers that could inflate and reduce impacts.