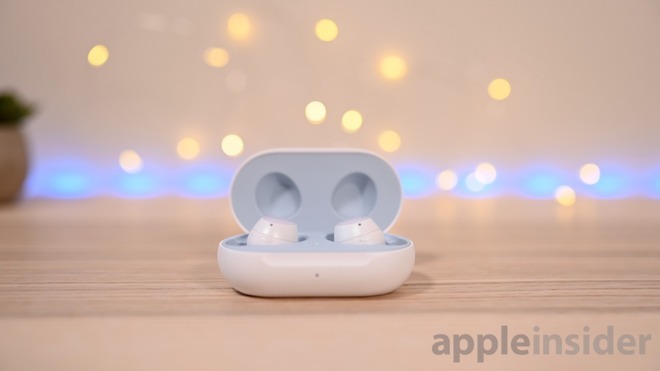 The comparison, published on Tuesday, reached many of the same conclusions as AppleInsider's Galaxy Buds review from March, albeit applied to the -- slightly -- tweaked second-generation AirPods.

Curiously, the report goes one step beyond crowning Samsung a victory, and denies AirPods a coveted "recommended" rating. According to Consumer Reports' Thomas Germain, Apple's product "didn't score well enough" in the publication's tests to warrant a recommendation, despite plaudits for iOS integration and a streamlined user experience.

Consumer Reports does note AirPods turned in a "decent" performance reproducing music and movies, and will "sound perfectly acceptable" to some users. AirPods' phone call audio and carrying case were also given the thumbs-up.

"The AirPods don't sound terrible -- far from it. But when you listen back-to-back with the Samsung Galaxy Buds, the difference is undeniable. You don't have to be an audio snob to hear it," Germain writes.

Consumer Reports has a somewhat controversial history when it comes to grading Apple's latest releases, with some alleging the publication trades on the tech giant's name to drive readership. In 2016, for example, the reviewers failed to recommend MacBook Pro for the first time, a decision later reversed after discussions with Apple and a software update. A quick dismissal of HomePod in 2018 again stoked claims of bias.

Following the HomePod kerfuffle, AppleInsider was granted an inside look at the publication's facilities and testing methodologies. At the time, Consumer Reports reviewers and editors denied undue prejudice against Apple, saying their results are objective and based entirely on analytical and data-driven methodology.
«12345»