AppleInsider
Posted: October 4, 2019 12:05AM
in General Discussion edited October 2019
Apple CEO Tim Cook continued his European tour on Thursday with a visit to Italy's Osservatorio Permanente Giovani-Editori, where he discussed a range of topics including climate change, "fake news," human rights and more in front of a crowd of budding journalists, teachers and students. 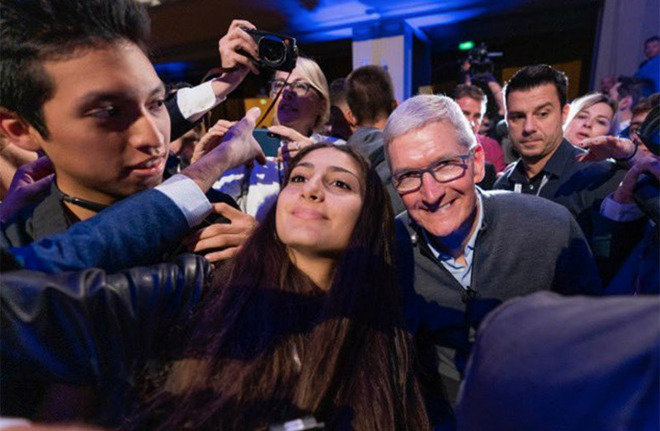 The Osservatorio, which Apple backs financially, is a private institution founded on the basis of furthering media literacy education through classroom lessons, teacher training, research and outreach.Cook sits on the Osservatorio's International Advisory Council alongside Ceccherini, Dean Baquet, director of The New York Times, Matt Murray, director of the Wall Street Journal and Norman Pearlstine, director of the Los Angeles Times.

During today's interview, Cook touched on the proliferation of so-called "fake news," or yellow journalism designed to catch hold and spread through social media platforms.

"The Internet has brought so many positive things, but fake news is one of the negatives," Cook said, according to a machine translation of the original report. "Quality journalism is the foundation of every democracy and an open and free press is essential."

"I believe that if each of us starts to think that everything we do is supervised and what we research and what we think is known, in time we will change our behavior," Cook said. "Not because there is something wrong, but because with less time available we explore less. Also because of some governments and companies that monitor some citizens."

As usual, Cook snuck in a line about Apple's privacy policies. Echoing an oft-cited refrain, the executive said his company does not sell user data, nor does it treat consumers as a product. The implication is that other firms, namely Facebook and Google, lean on the data of their respective customer bases for monetary gain.

The discussion then turned to cryptocurrency. Again taking aim at Facebook and its Libra product, Cook said companies should not be in the business of creating and managing currencies. He said much the same in an interview with local newspaper Les Echos on Thursday, reports CNBC.

"No. I really think that a currency should stay in the hands of countries. I'm not comfortable with the idea of a private group setting up a competing currency," Cook said. "A private company shouldn't be looking to gain power this way."

Cook also mentioned Apple's efforts to further human rights reform in the U.S. and abroad. The Apple chief explained the company's stance on immigration, and more specifically support of the Deferred Action for Childhood Arrivals (DACA) program. Cook and Apple SVP of Retail and People Deirdre O'Brien this week signed an amicus brief delivered to the U.S. Supreme Court in favor of DACA and its protection of "Dreamers."

"We do not do it because it is required by regulations but because it is a moral imperative," Cook said during Thursday's interview. "We are also supporters of immigration because wealthy countries must accept migrants who are fleeing difficult situations. I would like young people and children, the so-called Dreamer, to remain in the U.S. to study. Education brings equality, a springboard to make sure that everyone can have equal opportunities."

Before departing, Cook left those gathered at the Osservatorio with a contemplation on device addiction.

"Smartphones must bring you closer to those who are far away, not move you away from those close to you," Cook said. "If you spend more time looking at your smartphones instead of people's eyes, you are [doing it] wrong. We make products to help you and not to waste time."

The Apple head offered a similar sentiment in a June interview, saying, "[M]y simple rule is if I'm looking at the device more than I'm looking into someone's eyes, I'm doing the wrong thing."