Developer of BlueMail sues Apple over 'Sign in with Apple,' App Store 'monopoly'

AppleInsider
Posted: October 4, 2019 9:58PM
in General Discussion edited October 2019
A developer of messaging products and software behind apps like Followapp and BlueMail on Friday filed a multi-pronged lawsuit against Apple, claiming the tech giant infringed on patented technology with "Sign in with Apple" and subsequently used its alleged monopoly over the App Store to suppress BlueMail's consumer reach. 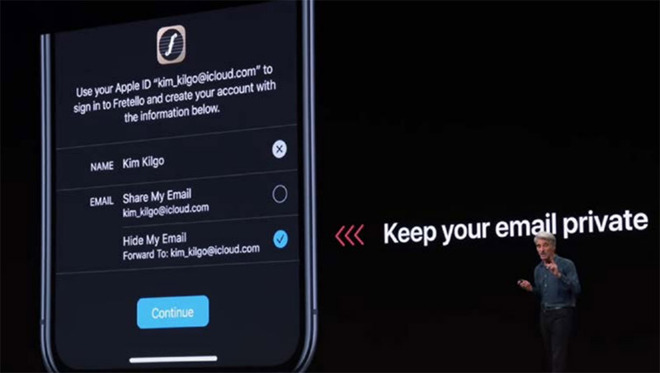 In a filing with the U.S. District Court for the District of Delaware, Ben Volach, co-founder of software development firm Blix, asserts Apple stole BlueMail's "Share Email" feature for integration in "Sign in with Apple."

According to the suit, Share Email enables users to communicate "using manageable public interaction addresses, without revealing their private interaction addresses." (Emphasis in original.) BlueMail users, such as companies, can leverage the feature to post an email address to social media platforms, then engage in secure private messaging with customers through said account.

In essence, the technology acts as an automated clearinghouse for anonymized public messages. The key to BlueMail's private messaging method is the generation of a "reverse list" that ties user actions to their public address. This technique presents a fence through which parties can send and receive messages to a unique public account without divulging their private email address.

Volach received protection for the technology behind Share Email in 2017 in U.S. Patent No. 9,749,284. According to the plaintiff, elements of Sign in with Apple infringe on the '284 patent.

Unveiled at the Worldwide Developers Conference in June and implemented in iOS 13, Sign in with Apple is an in-house authentication service designed to mask private user data. An alternative to single sign-on authentication systems in use by Google and Facebook, Sign in with Apple offers more control over what information is shared with third-parties in an effort to limit or nullify user tracking.

As it directly applies to Volach's invention, Sign in with Apple presents users an option to protect, or "hide," their email account from web entities that require email authentication. When "Hide My Email" is selected, Apple's system generates a unique email address specific to a querying app or web service, then forwards all communication from that address to a user's private email account. To grant users more control over multiple sign-ons, each relay address can be disabled at any time.

Volach claims Apple's alleged theft of BlueMail's Share Email function hurt the app and Blix, a successor company launched in September 2019 to provide corporations with technology outlined in the '248 patent. As noted in the filing, one of Blix's major features is Messaging Bridge, a system that enables companies to engage with customers through anonymous interactions.

In addition to patent infringement, Volach, citing a recent New York Times article, claims Apple artificially suppressed BlueMail from appearing in App Store search results. Apple supposedly updated App Store search algorithms following the NYT investigation, and as a result BlueMail jumped from No. 143 to No. 13 in search results for simple keywords like "email," according to the filing.

Finally, the plaintiff alleges Apple removed BlueMail's macOS client from the Mac App Store citing violation of App Store Guideline 4.3, a regulation covering "spam" apps that duplicate another app's content and functionality. The takedown occurred on May 21, less than two weeks before Sign in with Apple was announced.

Interestingly, Apple said BlueMail aped an app called TypeApp, which is developed by a company affiliated with Volach. The complaint notes TypeApp was voluntarily removed from the App Store weeks prior to BlueMail's entrance on May 8, a situation that seemingly undermines Apple's claims of "duplicate" content.

Volach is suing Apple for patent infringement and illegal monopolization of the App Store, and seeks an injunction, damages and legal fees.