AppleInsider
Posted: October 18, 2019 3:53AM
in General Discussion edited October 2019
Apple CEO Tim Cook met with China's minister of the State Administration of Market Regulation on Thursday to discuss a range of topics including the company's growing investment in the region. 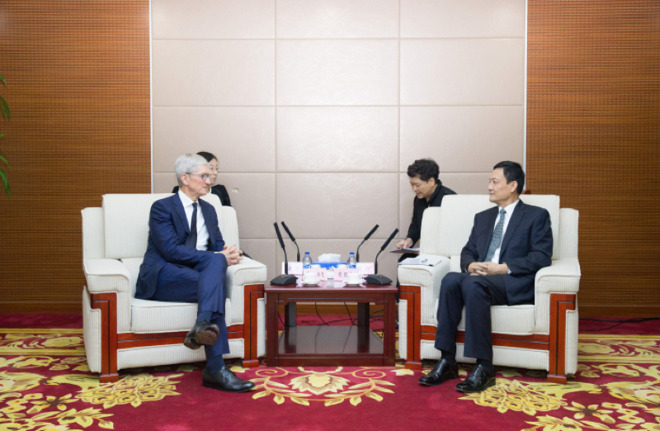 Cook's meeting with chief market regulator Xiao Yaqing was announced in a post to the administration's website on Friday, reports Reuters.

Beyond noting that the sit-down talk took place on Thursday, the regulator's release fails to provide detailed information about the meeting. It did say Cook and Xiao discussed a wide range of topics including expanding investment and development in China, consumer rights and corporate responsibility issues.

Apple relies heavily on China-based partners to manufacture and assemble its catalog of products, from iPhones to Mac. In addition to production assets, the company's interest in China extends to the country's vast consumer market. During the last quarter, the Greater China region generated $9.2 billion for Apple, accounting for 17% of total net sales.

Through its partner manufacturers and direct contributions, Apple continues to invest heavily in China. Alongside business ventures, the company sponsors corporate responsibility initiatives like the China Clean Energy Fund and a sustainable forestry program.

While it pushes Chinese companies toward responsible material sourcing, ethical labor policies and environmentally conscious production methods, Apple regularly comes under fire for kowtowing to China's regime. The company walks a tightrope between forwarding its social agendas and not running afoul of Chinese state policy.

Cook later defended the decision to acquiesce to Chinese government demands, saying the app in question, HKMap Live, was in violation of Hong Kong law. Critics, however, noted the title's core functionality did not contravene local regulations, nor did it break rules laid out in Apple's own App Store Guidelines.

Apple's appeasement of Beijing, which often runs in contrast with its well-groomed image as a bastion of human rights, data privacy and free speech, has been a point of contention for years. In 2017, the company removed the New York Times app at the request of China's government, then moved iCloud data and cryptographic keys to servers in China a year later.

When questioned about the decisions, Apple contends it is simply following laws laid out by China's government.